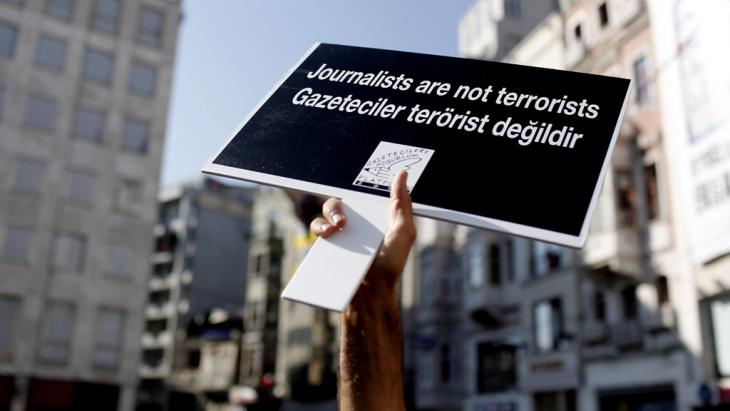 The working conditions for Kurdish journalists in Turkey have always been difficult. But since the failed coup attempt in July this year, their work is being hindered in an alarming manner. By Sonja Galler in Diyarbakir

Accusations of supporting terrorism or insulting the president, the freezing of Twitter accounts and hampering on-the-ground research, threats on the street and in social media – for years now all this has been a feature of daily life for critical journalists in Turkey.

What′s more, anyone reporting from the Kurdish region was always subject to close scrutiny and subjected to harsh measures by the authorities and the judiciary. Since the peace process between the Turkish government and the PKK ground to a halt last year, working conditions that were already bad have noticeably worsened.

And yet the arrests, dismissals and media outlet closures since the failed coup attempt of mid-July and the ensuing imposition of a state of emergency have assumed a new quality that cannot simply be regarded as an exacerbation of the situation to date. This is the view of freelance Kurdish journalist Hatice Kamer, who reports from Diyarbakir for the BBC, among other outlets.

Even for journalists who like Kamer are engaged by international media, it has now become almost impossible to work: "Our passes are checked on every corner, we are refused access to anything that′s going on, colleagues are being arrested. Now we′re even being prevented from accessing the Internet." You can hear the exhaustion in the voice of the experienced journalist.

That critical reporters are risking life and limb as they go about their work is something she has herself experienced at first hand: when she and a number of colleagues set out to report on a bomb attack on a police station near Midyat last June, the journalists were insulted by a group of residents and physically attacked. Kamer was badly injured when a stone was thrown at her head. The police did not intervene until much later.

Since the arrest in mid-October of the two mayors of Diyarbakir, Gulten Kisanak and Firat Anli, access to social networks such as Facebook, Twitter and also WhatsApp has been repeatedly blocked in the southeast of the country. Access to the Internet is patchy and sporadic. This is catastrophic, not just for journalists. 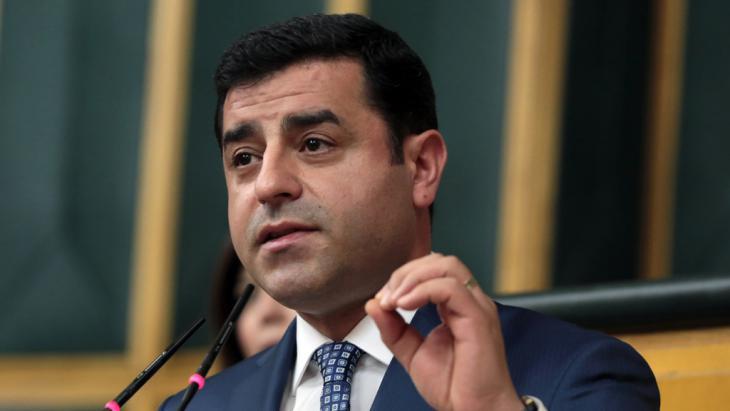 In the crosshairs of the Erdogan dictatorship: great was the sense of international outrage last Friday as the Turkish government arrested nine HDP members of parliament, including the party′s two leaders Selahattin Demirtas und Figen Yuksekdag. As a result the remaining HDP members of parliament have refused to participate in any more parliamentary debates or committee work. With 59 seats, the HDP is the third strongest faction in the Turkish parliament. The nine MPs currently in custody are accused of belonging to the forbidden Kurdish Workers′ Party (PKK) and of disseminating "terror propaganda". Ankara has accused the HDP of being the political wing of the PKK, something the party denies

In the early hours of last Friday, when senior members of the HDP including Figen Yuksekdag and Selahattin Demirtas were arrested in their homes, journalists at the scene had no other option but to convey their reports via telephone or text message to colleagues in the west of the country.

The next morning, when a bomb attack was carried out close to a police building in Baglar-Diyarbakir, only employees of the state news agency Anadolu were able to report directly from the scene, says Cihan Olmez from the news agency DIHA, which has now been closed down.

There is general agreement that Internet access is not only being blocked to decelerate the flow of journalistic information, but also to prevent a political mobilisation: the arrest of the politicians, who are viewed as symbolic figures of the Kurdish movement, is yet another devastating blow in what is already a highly charged situation.

At the start of the school year, some 11,000 Kurdish teachers were suspended allegedly supporting terrorism, 4,000 of them in Diyarbakir alone. In some 25 HDP-governed local authorities, the mayors have now been dismissed and the authorities placed under forced administration.

Even Facebook and Twitter turned out to be an important source when Kurdish fighters and Turkish army units clashed heavily in the old town of Diyarbakir: sometimes minute-by-minute, in accounts that were not always verifiable, they reported from the various flashpoints of the city, while most Turkish media remained silent or focused on the "courageous efforts" of the security forces whilst barely mentioning the civilian victims.

"The Kurds are full of anger and want to express their protest. But any form of protest, assembly and demonstration is prohibited by the state of emergency. The blockade is aimed at silencing the voices of the Kurds, to prevent that public finding out about developments in the region," writes the journalist Nurcan Baysal ("Writing from Diyarbakir under blockade", 1.11.2016).

In late October, the government used the state of emergency decree to shut down another 15 media outlets in a third wave of closures – among them primarily pro-Kurdish outlets such as the news agency DIHA. With its extensive network of employees, the agency represented an important although by no means always objective counterweight to Anadolu. 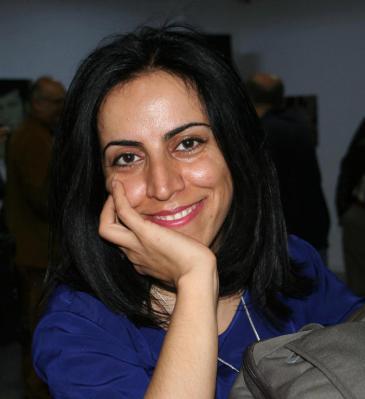 Even for journalists who like Kamer are engaged by international media, it has now become almost impossible to work: "Our passes are checked on every corner, we are refused access to anything that′s going on, colleagues are being arrested. Now we′re even being prevented from accessing the Internet"

Olmez says it had been expected that following the closure of actual or alleged pro-Gulen media, that the repressive measures would now also bear down heavily on Kurdish media. Since the closure of the DIHA, he and his colleagues have been trying to continue their work. Recording devices and video cameras are no longer used in public places.

Kamer also explains the difficulties that have arisen from the loss of agencies for the work of journalists: "If there′s no backing from an agency, this means a huge security problem for us. If we publish anything controversial under our own names, we become a direct target," she says.

JINHA, an agency run by women, was also shut down, as well as the daily newspapers Ozgur Gundem (already banned 50 times in its history) and the Kurdish-language Azadiya Welat. Television broadcasters such as IMC TV, Azadi TV, but also the Kurdish children′s channel Zarok TV had already been closed in early October.

This brings the number of closures of media outlets and publishing houses that the government claims "threaten national security" to around 160. Following several waves of detentions and closures as part of the current state of emergency, this means most of the relevant news media is now under state control.

"The worst thing is feeling so helpless"

In her 2015/16 documentary film ″Shooting Images″, the Berlin filmmaker Ariana Dongus accompanied three Kurdish journalists in an exploration of the effect of this permanent pressure on journalists in Diyabakir, who now report on crisis after crisis: "something that repeatedly struck me while I was working with the journalists is the impact that the political conflicts have on every second of life. For the film I also worked with a fixer who formulated it very aptly: ′It is as though the situation impacts upon the very core of our soul. In the morning the first thing we do is check the social media feeds and turn on the television and wonder: what′s going to happen next.′ The worst thing is feeling so helpless."

Just how alarming the situation is, is also expressed by a publisher of a Kurdish literary magazine who wants to remain anonymous: "I am absolutely convinced that the closures are not only aimed at supressing political activity, but also the fundamental diluting of Kurdish culture in Turkey and in the region as a whole," he says.

The closure of an intellectual magazine such as Tiroj with a small readership, but also the arrest of the Kurdish writer and translator Fahriye Adsay are examples of the attempts that are being made to spread fear and horror at any kind of free speech, the publisher says. He talks about how in the early 2000s, Diyarbakir developed into a Kurdish-language cultural centre and how many publishing houses and magazines are now based there. "I would never have thought that they would take all that away from us again," he adds.

The Turkish government is hoping to split the opposition and put off voters by cracking down on pro-Kurdish politicians. But critics say the strategy won't work this time. By ... END_OF_DOCUMENT_TOKEN_TO_BE_REPLACED

Recently, Twitter has become something of a people's court for Turks seeking justice. Particularly in cases of violence against women and animal rights, social media is regarded ... END_OF_DOCUMENT_TOKEN_TO_BE_REPLACED

Now that he has converted Hagia Sophia back into a mosque, Turkey's president, Recep Tayyip Erdoğan is setting his sights on the Al-Aqsa Mosque in Jerusalem. Joseph Croitoru ... END_OF_DOCUMENT_TOKEN_TO_BE_REPLACED

Ronya Othmann's novel "Die Sommer" (The Summers) tells the story of Leyla – the daughter of a German and a Yazidi Kurd – who visits her grandparents' Yazidi village in northern ... END_OF_DOCUMENT_TOKEN_TO_BE_REPLACED

In the aftermath of the devastating explosions in Beirut, French President Emmanuel Macron is styling himself as Lebanon's saviour. Ultimately, however, the success of his efforts ... END_OF_DOCUMENT_TOKEN_TO_BE_REPLACED

Lacking support from Arab countries for its stance on the Kashmir dispute, Pakistan is looking for new alliances under China's leadership. How practical is it for Islamabad to ... END_OF_DOCUMENT_TOKEN_TO_BE_REPLACED
Author:
Sonja Galler
Date:
Mail:
Send via mail

END_OF_DOCUMENT_TOKEN_TO_BE_REPLACED
Social media
and networks
Subscribe to our
newsletter