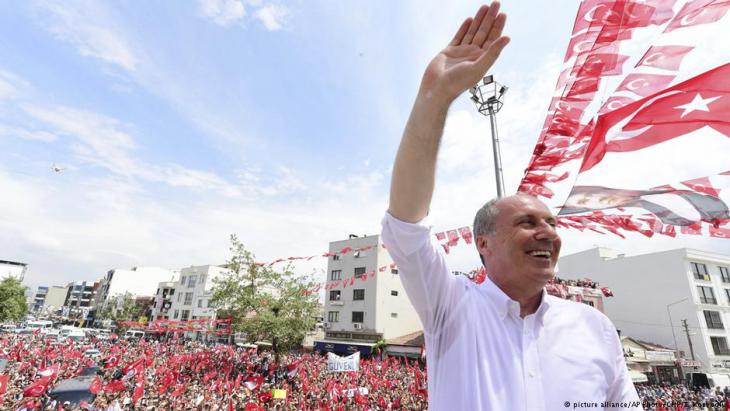 The upcoming ballot in Turkey on 24 June will be a race between the People's Alliance, formed to keep Erdogan president, versus the Nation Alliance, which aims to beat him or at least win a parliamentary majority. The result, however, depends on a third party, the pro-Kurdish HDP. Ayse Karabat reports from Istanbul

Turkey's fast-paced politics will experience many firsts in the country's snap election on 24 June, including pre-election alliances. More than 59 million voters will not only choose their president but also their political preferences for the 600-seat parliament, with some parties running as alliances – unprecedented in Turkish history. The contest is, therefore, not only between ideas, but also between the pre-election calculations of the parties.

In March of this year, the Turkish Parliament approved a joint initiative of the ruling Justice and Development Party (AK Party) and Nationalist Movement Party (MHP) to introduce pre-election alliances, following a heated night-long debate that on occasion boiled over into violence. According to the new regulation, parties can enter elections as an alliance but retain their own name on ballot papers.

Turkey's notorious 10 percent electoral threshold – harshly criticised by all opposition parties but never changed when they reach power – will remain in place, but will apply to the sum of votes for the alliance. This tricky regulation will be key to the future of Turkey, as the opposition is counting on the People's Democracy Party (HDP), the Kurdish-oriented party, passing the barrier, despite its exclusion from the newly formed alliances.

The road to these new regulations was opened by Devlet Bahceli, leader of the MHP and one-time arch-rival of the AK Party and its leader, President Recep Tayyip Erdogan.

After the coup attempt in July 2016, Bahceli's MHP backed the AK Party in the constitutional referendum of April 2017, which changed Turkey from a parliamentary democracy to a country with presidential rule.

At the same time, the MHP faced its own challenge: a number of its former deputies established a new nationalist party, the Good Party (IYI Party). The concern among the MHP rank and file was that this might erode its 12 percent support at the ballot box. These worries provided the groundwork for co-operation between the MHP and the AK Party, but the move to form a pre-election alliance took little bit more time. 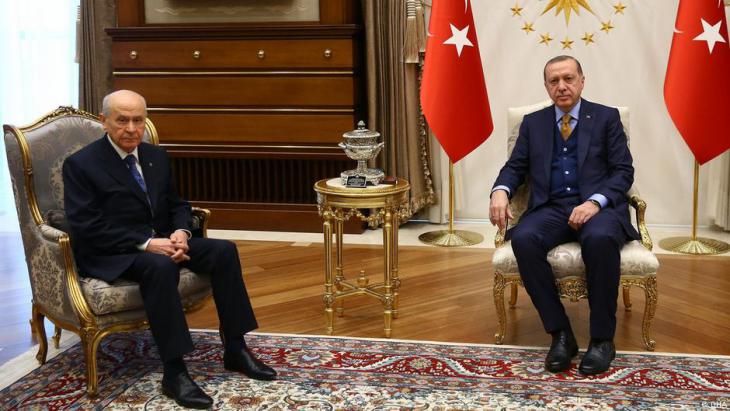 Former rivals attempt to shore up the status quo: Erdoganʹs party – the AKP – and Bahceliʹs MHP have come together to create the Peopleʹs Alliance. The alliance manifesto centres on threats to Turkey such as terrorism or coups. The People's Alliance claims to be the only solution, accusing opponents of serving the interests of enemies of the state, writes Karabat

The constitutional amendments envisaged elections for 2019, but this all changed with a series of events that began to unfold in January.

Firstly, Bahceli said the MHP would not field a presidential candidate but would instead support Erdogan. Then, in February, he persuaded the AK Party to introduce amendments to the election law, enabling pre-election alliances. Then, in April, he demanded early elections. It is still unclear to political analysts whether Bahceli's moves were pre-arranged or designed to put pressure on the AK Party. In any case, the latter had good reason to accept the helping hand of the MHP.

All eyes in Turkey are on a court hearing scheduled for January 30 into a child abuse case that allegedly occurred with the knowledge of one of Istanbul's most powerful Islamic ... END_OF_DOCUMENT_TOKEN_TO_BE_REPLACED

Any reconciliation between Turkey and Syria’s Assad regime would have disastrous consequences for many Syrians, explains Syria expert Kristin Helberg END_OF_DOCUMENT_TOKEN_TO_BE_REPLACED

The poetry of Pir Sultan once prompted uprisings in the Ottoman Empire. To this day, Alevis identify with him. Rainer Hermann visited Mehmet Celebi, a direct descendant of the ... END_OF_DOCUMENT_TOKEN_TO_BE_REPLACED

There are signs of an imminent normalisation of relations between Turkey and Syria. This would allow Erdogan to score political points domestically before the upcoming elections ... END_OF_DOCUMENT_TOKEN_TO_BE_REPLACED

Turkey will mark the centenary of the proclamation of the Turkish republic in October. But 2023 will be an important year in another respect too: Turks will go to the polls in ... END_OF_DOCUMENT_TOKEN_TO_BE_REPLACED

END_OF_DOCUMENT_TOKEN_TO_BE_REPLACED
Social media
and networks
Subscribe to our
newsletter