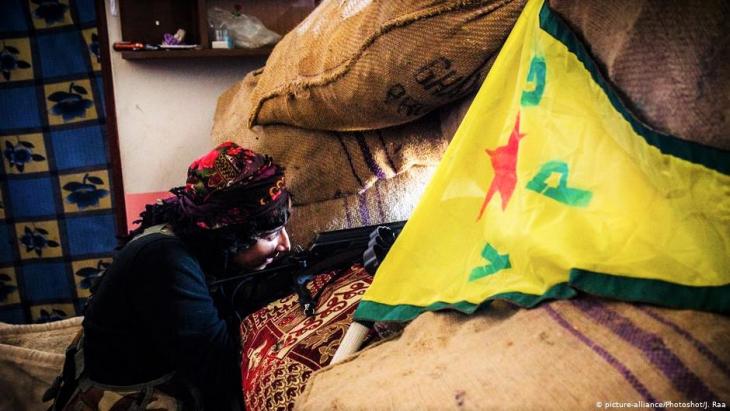 When the Kurds of Syria came under Turkish fire less than ten days ago, the Kurdish Autonomous Administration of North and East Syria was left with no choice but to call on Assad for help. Thus ends a political project that many hailed as a model for the future order of Syria. But, as Ulrich von Schwerin points out, it was a project built on very shaky foundations

Bashar al-Assad didn't hesitate for long when the embattled Kurds called on him to help them in their fight against Turkey. On Monday morning, Assad's troops moved into the town of Tal Tamr. Only a short time later, his tanks rolled into Tabqa and Ain Issa. That evening, they took control of Manbij. Although the Kurdish autonomous administration was at pains to emphasise that this was just military support to help it defend the border, there can be no denying that the return of government troops to the Kurdish region sounds the death knell for the Kurdish autonomy project in Syria.

After fighting so hard for their autonomy, it is a bitter blow for the Kurds to find themselves once again under the yoke of the dictator. But under fire from Turkey and abandoned by their American allies, they were left with no choice. Soon after the start of the offensive, it was clear that the People's Protection Units (YPG) would not be able to withstand the pounding of the Turkish air force and their Islamist auxiliary forces in the flat, open terrain of northern Syria.

That said, the reasons why the Kurdish autonomy project is now at an end are more political than military. It had been clear for quite some time that the situation was not tenable in the long term. The Kurds were caught between a rock and a hard place: to the north, President Recep Tayyip Erdogan of Turkey, who saw the YPG as a terrorist organisation; to the south, President Bashar al-Assad of Syria, who was steadfastly determined to retain his grip on power. To compound matters further, the Kurds' most important ally was Donald Trump, who was patently out of his depth when faced with the complexity of the conflict and had no long-term strategy.

With the return of government forces, a political project that many hailed as a model for the future order of Syria is now at an end. At the start of the civil war and under the leadership of the Democratic Union Party (PYD), the Kurds set up their own administration, schools and security forces in the northeast of the country. The government in Damascus was willing to tacitly accept this as long as the Kurds never took up arms against them.

With its secular orientation, its active espousal of gender equality and its support for democratic structures, the PYD quickly won favour in the West. However, people often overlooked that the PYD also suppressed rival parties, locked up critics and drove out thousands of Arab residents. Yet its decentralised model seemed like a ground-breaking way of bringing peace to Syrian society, which is so riven by ethnic and political tension.

When the jihadist militia known as "Islamic State" (IS) appeared in Syria, the YPG decisively stood up to it. While both Ankara and Damascus largely looked on from the sidelines, the YPG fighters drove out the extremists from Kobani and other cities, losing many of their own in the process. For lack of alternatives, the U.S. decided to support the Kurdish militia by supplying it with weapons, air support, and special forces. They quickly learned that their Kurdish allies were to be relied upon.

But the Kurdish autonomous administration in northern Syria was a thorn in Turkey's side. Turkey saw the presence of the YPG on its border as a threat because of its links to the Kurdistan Workers' Party (PKK), which has been waging a war against the Turkish state since the 1980s. Ankara was afraid that modern U.S. weapons would end up in the hands of the PKK. It protested bitterly to Washington about America's decision to arm this "terrorist organisation".

After the last IS bastion on the Euphrates fell to the Kurds, Kurdish militias controlled about one-third of Syrian territory. But Assad left no one in any doubt that he would not accept a division of power in the long run. The PYD relied on the military support it was getting from the U.S. and the protection of its major ally in order to defend its autonomy. At the same time, it was always clear that Washington's aim in all this was not to support the Kurds, but to defeat the jihadists. 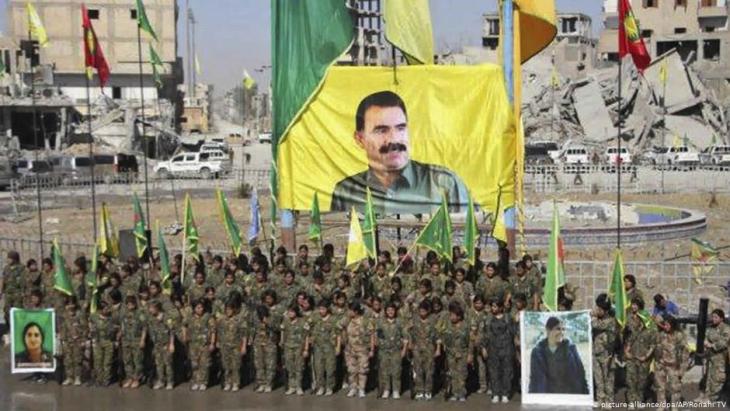 Shoulder-to-shoulder with Abdullah Ocalan: the only way to resolve this conflict was for the PYD to credibly distance itself from the PKK and assure Ankara that it would not support its Kurdish brothers and sisters in Turkey in their fight for autonomy. But the PYD didn't do that. Instead, it made no secret of its close ties with the PKK: images of Abdullah Ocalan, the imprisoned founder of the PKK, hung in every PYD office and were held aloft at every PYD demonstration

At the end of last year, Trump announced he would be withdrawing U.S. troops as soon as IS was vanquished. Ending the troops' presence in the region seemed all the more urgent to him because U.S. support for the PYD had mired him in an unresolvable conflict with Turkey, a NATO partner. Right from the outset, aid for the PYD was only possible if the U.S. closed its eyes to the obvious ideological and personnel links between the PYD and the PKK.

Fateful ties with the PKK

The only way to resolve this conflict was for the PYD to credibly distance itself from the PKK and assure Ankara that it would not support its Kurdish brothers and sisters in Turkey in their fight for autonomy. But the PYD didn't do that. Instead, it made no secret of its close ties with the PKK: images of Abdullah Öcalan, the imprisoned founder of the PKK, hung in every PYD office and were held aloft at every PYD demonstration.

Ultimately, the PYD would have had to break with its mother party and concentrate on building up its autonomous region in Syria. The situation in northern Iraq shows that Ankara can quite happily live with a Kurdish autonomous region on its border as long as that region distances itself emphatically from the Kurdish guerrillas inside Turkey. The fact that this was out of the question for the PYD shows how inextricably linked it really is to the PKK.

This is not, of course, a justification for Turkey's war of aggression. After its attack on Afrin, Ankara didn't offer any proof that the YPG posed an immediate threat. By that point, Turkey had already secured its border so tightly that the smuggling of weapons or the infiltration of fighters was simply not possible. In security policy terms, therefore, Turkey's Syria offensive was not necessary. In legal terms, its incursion into a neighbouring country's territory, was highly dubious.

What happens next is anyone's guess. Despite the fact that he despises the dictator in Damascus, Erdogan can quite happily live with Assad's return to northern Syria. Nevertheless, Turkey is not simply going to withdraw from the territory it has already occupied. Much now depends on Russia, which is playing a questionable, albeit key role as mediator between Ankara, Assad and the Kurds. It is already clear who the winners of this war are – and they don’t include the Kurds.

On 3 November 2002, Erdogan's newly founded AKP, Justice and Development Party, came to power in Turkey. It has ruled the country ever since, becoming more authoritarian with each ... END_OF_DOCUMENT_TOKEN_TO_BE_REPLACED

Lamya Kaddor, MP for Germany’s Green Party, visited Qatar with a group of parliamentarians. In interview with Claudia Mende, she advocates a differentiated picture and urges that ... END_OF_DOCUMENT_TOKEN_TO_BE_REPLACED

Daniel Barenboim is not only a world-famous pianist and conductor. He has also worked tirelessly to foster understanding and reconciliation between Palestinians and Israelis. By ... END_OF_DOCUMENT_TOKEN_TO_BE_REPLACED

After a two-year hiatus, the Arab League re-convened at the beginning of November in Algiers against a backdrop of uncertainty and discord. By Pierre Boussel END_OF_DOCUMENT_TOKEN_TO_BE_REPLACED

Iran has withdrawn its participation in the Frankfurt Book Fair, accusing the event of meddling in the country's domestic affairs. Organisers have denied the accusation. By ... END_OF_DOCUMENT_TOKEN_TO_BE_REPLACED
Author:
Ulrich von Schwerin
Date:
Mail:
Send via mail

END_OF_DOCUMENT_TOKEN_TO_BE_REPLACED
Social media
and networks
Subscribe to our
newsletter