Turkey's top court on Wednesday refused to hear an appeal by a leading pro-Kurdish lawmaker against his expulsion from parliament over terror charges linked to a social media post.

Parliament this month stripped Omer Faruk Gergerlioglu of the Peoples' Democratic Party (HDP) of his seat after he was convicted of "spreading terrorism propaganda" on social media.

The offending post, which could see him jailed for two and a half years, featured an article in which outlawed Kurdish militants who have been waging a deadly decades-long insurgency, called on the government to take a step toward peace.

Gergerlioglu has irritated President Recep Tayyip Erdogan's government by shining the light on human rights violations that go ignored by the mainstream Turkish media, including strip searches of women in detention.

The Constitutional Court on Wednesday said it did not have the competence to rule on Gergerlioglu's appeal, the official Anadolu news agency reported.

Gergerlioglu tweeted that he now intends to file an appeal with the European Court of Human Rights in Strasbourg. 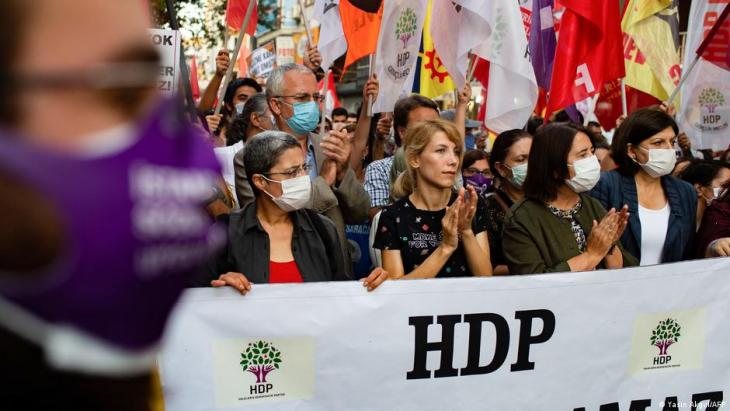 Protesters holding a HDP banner and flags during a march in Istanbul. In an attempt to split and weaken the opposition, President Erdogan hopes that a Turkish court will accept an indictment to ban the HDP over its alleged links to the outlawed Kurdish PKK

Turkey's top court is also due to decide on Wednesday whether to accept an indictment to ban the HDP over its alleged links to the outlawed Kurdistan Workers' Party (PKK).

The Turkish government says the HDP – the third largest party in the parliament – is the political front for the PKK, which the party denies.

The PKK is blacklisted as a terrorist organisation by Ankara and its Western allies, and has waged an insurgency against the Turkish state since 1984.

A top prosecutor this month put an indictment before the Constitutional Court with an ultimate goal to dissolve the HDP and ban 687 party members from engaging in politics for five years.

The attempt to ban the party hit a legal snag on Tuesday when a special court rapporteur concluded that the prosecutor's case had "deficiencies" relating to the identities and roles of some of the defendants.

The court now has the option to either send back the indictment for further work or to accept it and allow the prosecutor to amend his file during the trial, Turkey's NTV television said. (AFP)

END_OF_DOCUMENT_TOKEN_TO_BE_REPLACED
Social media
and networks
Subscribe to our
newsletter