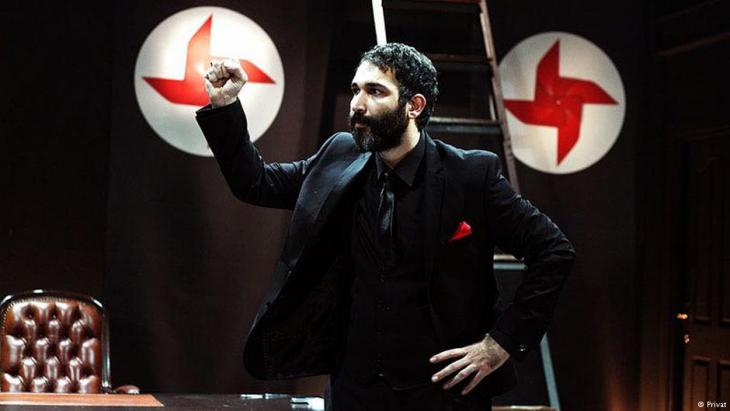 Turkish actor Baris Atay plays a dictator in a one-man show that is intended to get audiences thinking. The play has been banned in several Turkish cities, but Atay remains defiant. By Gezal Acer

After years of performing in the one-man show "Only A Dictator", Baris Atay has been banned from taking to the stage in several Turkish cities.

In Ankara, he was personally told not to perform. In addition, the governors of the northern Turkish cities of Artvin and Hopa have officially banned the play. As has Kadikoy, one of Istanbul's largest and most populous districts. It has been claimed that his play could be a threat to public order and security.

The story of a dictator

"Only A Dictator" was written by Onur Orhan and is directed by Caner Erdem. Atay plays a dictator who struggles with an inner conflict. After the show, the audience is invited to form its own opinion about dictators.

So why has this play, which has been running for three years, suddenly been banned? "We haven′t really changed anything," Atay said. The play alludes to Turkey's present government under the leadership of President Recep Tayyip Erdogan. Supporters of Erdogan's Justice and Development Party (AKP) took offence, expressing their anger on social media. Atay said he thinks the decision to ban the play shows how much pressure Turkey's government is willing to exert on critics.

Atay is known for his political activism and convictions. In 2015, he stated, "If there were a dictator, you wouldn't be watching this play."

When police prevented the play from being shown in Istanbul last week, Atay alluded to his 2015 statement, asking: "Do you accept that this ban means our president is a dictator?"

Atay has starred in several TV series and movies. He is a keen follower of societal developments and is not shy of criticising the government. 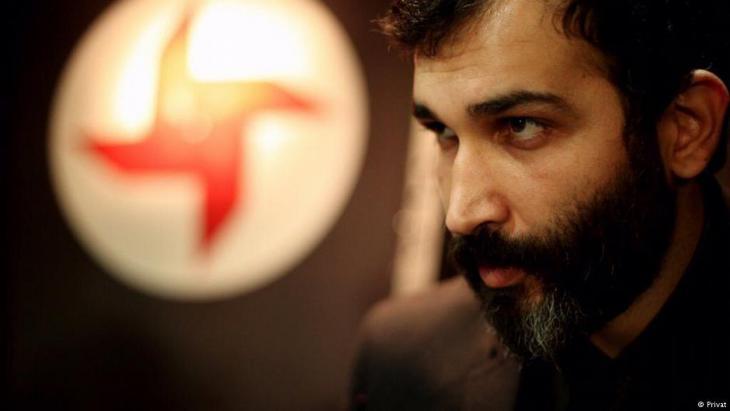 Defiant in the face of political pressure: "if we are already too fearful today to say some things, we must realise that it will soon be impossible to say anything at all," Atay said. "This country will then no longer be one in which we can live," warns the 37 year-old actor Baris Atay

With almost 1 million followers on Twitter, he has considerable influence on social media. "Turkey is divided: there are those who do whatever the government says and those who question it," Atay said, adding that the former are exerting pressure on those with a more critical mindset.

His critical attitude means Atay is regularly arrested — even when he's not performing onstage. Last year, he was even taken to court after Erdogan and his son complained about an article titled "Hey, Erdogan" that Atay had published in the newspaper Birgun. He was convicted of insulting the president and forced to pay a fine.

Under the AKP government, directors of state and city theatres have been replaced. Many artists critical of the country's political leadership have lost their contracts. Following the Gezi Park protests in 2013, numerous artists who began expressing their discontent were either dismissed from their jobs or felt obliged to move abroad. The state of emergency that was introduced after the failed coup d'etat in July 2016 compelled many to move to Europe. Baris Atay, however, chose to stay.

He said he believes that musicians, artists, theatre directors, authors and other creative types need to work together to bring about change in Turkey. Otherwise, pressure on critics will keep increasing. "If we are already too fearful today to say some things, we must realise that it will soon be impossible to say anything at all," Atay said. "This country will then no longer be one in which we can live."

Atay is adamant that he'll remain defiant and that he will find a way for people to see his performances. "I won′t ever leave the country that I love, just because some people have grown increasingly influential and are putting pressure on us," Atay said. "I will keep fighting leaders who undermine peace."

Germany’s electorate includes some 7.4 million citizens with international roots, while many more millions of residents from abroad aren’t allowed to vote. Both groups are often ... END_OF_DOCUMENT_TOKEN_TO_BE_REPLACED

International relations are shifting across the Middle East as regional powers adapt to America's retrenchment and China's growing influence. Although the region could become the ... END_OF_DOCUMENT_TOKEN_TO_BE_REPLACED

Germany's foreign policy is explicitly values-based. But what happens, Ralf Bosen asks, when democracy, the rule of law and human rights collide with the logic of trade and ... END_OF_DOCUMENT_TOKEN_TO_BE_REPLACED

A new global database shows a significant gap in reported COVID-related deaths, suggesting the actual worldwide death toll is short by at least 1 million. That's due in part to ... END_OF_DOCUMENT_TOKEN_TO_BE_REPLACED

Ankara's foreign policy apparatus is currently running at top speed. While politicians in the West busy themselves with evacuating Kabul and analysing the chaos, which not even ... END_OF_DOCUMENT_TOKEN_TO_BE_REPLACED
Author:
Gezal Acer
Date:
Mail:
Send via mail

END_OF_DOCUMENT_TOKEN_TO_BE_REPLACED
Social media
and networks
Subscribe to our
newsletter