The End of a Long Beginning

A dialogue between Armenians and Turks on the Armenian genocide appears to be an impossible prospect – but academics on both sides are showing that the opposite is the case. Wolfgang Gust reports 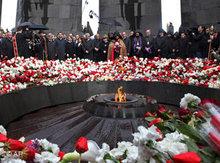 Joint remembrance of the Armenian tragedy: As well as tens of thousands of Armenians in Yerevan, for the first time human rights activists and artists in Istanbul also publicly honoured the victims of the massacres 95 years ago

​​ Whenever Armenians and Turks discuss the Armenian genocide in the German public arena, the clash is pre-programmed. Turkish representatives attempt to silence their opposite numbers with the same old arguments, while Armenian representatives insist on Turkish recognition of the genocide as a pre-condition for any dialogue. But there is another way of approaching the matter.

Organisers of the event were Taner Akçam, holder of the Clark University Kaloosdian/Mugar Chair, the only professorship in Armenian Genocide Studies in the US, as well as the Strassler Center for Holocaust and Genocide Studies.

Co-sponsors were the "National Association for Armenian Studies and Research" with Marc Mamigonian, as well as the US specialist on genocide and modern German history at the University of Minnesota, Eric Weitz.

The workshop focused on the Armenian genocide, and paid special attention to its documentation in archives scattered across the world, but also the question of how further research into the genocide should be conducted.

On the way to normalisation

The event was a display of academic diversity; the lectures, the discussion and even – in fact perhaps primarily – the diverging views were highly informative. The Turkish academics made an excellent contribution to the debate. One became witness to a process of normalisation.

"We have a long road behind us, and an even longer road ahead of us," said Taner Akçam in summary. All participants had "experienced the end of the beginning," he added.

This genocide is now no longer first and foremost the domain of Armenian researchers, he said. European, American and Turkish researchers in various disciplines also attended the workshop as a way of integrating the subject into their own deliberations and comparative studies of genocide, ethnic cleansing and crimes against humanity. "This development will lead to higher standards in the field of genocide research," said Akçam.

The genocide of Armenians is not portrayed globally from a unilateral point of view, as many Turks maintain, but completely unambiguously – and Turks who are interested in knowing the truth are making an ever greater contribution to this presentation.

Shortly before the workshop, my wife and I released a new edition of some 350 German Foreign Ministry files titled "Deportation Plans" on our Internet portal www.armenocide.net, which focuses on the publication of official documents.

These documents are hand-written, barely legible and therefore largely unknown files on Armenians working for Germany. In addition to a lack of civil courage on the part of the Germans, they primarily show what Turkish officialdom disputes energetically to this day: the power that enabled the Young Turk movement to decide on the fate of each and every Armenian.

Only rudimentary details can be gleaned from the German files on what role provincial authorities and local committees of Young Turks played in this process. But just exactly what their role was in the genocide was described by Ayhan Aktar, Turkish professor of sociology at Istanbul's Bilgi University, in his workshop lecture. Documents from the Foreign Office of Germany and Aktar's analysis of the Ottoman administration provide very valuable insights into what was actually happening on the ground at the time. 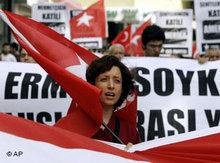 ​​ Instead, the US genocide denier Professor Justin McCarthy, whose views have long been disputed, was sent by Turkey to travel the length and breadth of the country in a bid to drape an academic cloak over the official Turkish sham version of events.

But many Turks now view the issue quite differently – thanks to recent events in Turkey itself: increasing numbers of Turkish grandmothers who reveal themselves as Armenians to their shocked grandchildren shortly before they die, a Nobel prize winner who hauls the state before the courts for refusing to concede that this was genocide, an Armenian-Turkish intellectual murdered by the nationalist Hydra and whose coffin was followed by vast crowds of mourners chanting: "We are all Hrant Dink!" Turkey is waking up.

Over the past five years, the Turkish world as I perceive it has undergone significant change. While my audience consisted almost exclusively of Armenians, after I published my first book on the genocide in the year 1993, now the majority are Turkish. They want to know what really happened back then.

Three years ago, a Turkish spectator asked me after a public conference in Berlin how he could verify my claims, which he doubted were true. I referred him to my previously published book containing hundreds of German Foreign Ministry documents on the genocide.

A few weeks ago, I heard back from this man, a Turkish national in his mid-50s. We met up, and he told me his story: whenever possible, once a week, he had been going to the political archive at the foreign ministry to compare the files.

He told me that he had then realised that it was all true. He went on to study further documents and made almost 800 pages of notes – in Turkish. Many of the additional files that he had read were unknown to me.

My interlocutor had almost outstripped me in his understanding of the German documents. And of course, he was no longer the slightest bit doubtful that the events of 1915/16 represented a classic case of genocide.

A grassroots movement has formed in the US and in Istanbul, which is pursuing a clearly-defined goal: to meet up with Armenians, drink tea together and to talk – to dispel all awkwardness and seek out the truth about those years during World War One.

These people call themselves "Friends of Hrant Dink". In Germany, the name "Projekt 2015" is under consideration. Ahead of the 100th anniversary of the start of the genocide, the children and grandchildren of the victims and perpetrators want to have fathomed one of the most terrible chapters in Ottoman history. And get to know each other again. 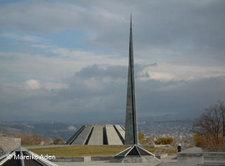 The Genocide Memorial in Yerevan: Turkey and Armenia have been in conflict for decades over how to deal with the massacres, in which according to the various sources between 250,000 and 1.5 million Armenians were killed

​​ For the first time, Turks, Kurds and Armenians have joined together this year to remember the events of 24 April 1915, when members of the Armenian elite in the Ottoman Empire were arrested and for the most part killed. It is the beginning of a period of joint remembrance – and, as recognised in Boston, the end of a long road for Turks in particular.

Will the Armenians go with them? At the Clark Workshop Ron Suny, Director of the Eisenberg Institute for Historical Studies at the University of Michigan, complained that the Armenians have thus far been too nationalistic.

This agitated the doyen of research into Armenia, Richard Hovannisian, who said that even as a convinced Armenian patriot, he was also obliged to find the truth. A dialogue would be possible with this approach.

Turkish ultras are in the process of losing their decades-long dominance. Some two hundred Turks and several Armenians attended an event in Frankfurt, Germany, to which a Turkish association had invited Taner Akçam and myself.

Then half a dozen neatly dressed young men appeared. "There they are," a Turkish man said to me and pointed to the group. These were the Turks who still dominated the scene a decade ago, and who now appeared as almost stigmatised outsiders: Kemalists, once courted by the Soviets, now representatives of an antiquated nationalism.

They are still trying to avert their failure, and are now even cozying up to Armenian hardliners who are also not interested in dialogue.

The next few years will show whether the Turks, Kurds and Armenians who are ready for dialogue can take the decisive step that researchers of both nations have already sealed in Boston.

Wolfgang Gust worked as an editor at "Der Spiegel" until 1993. His book "Der Völkermord an den Armeniern 1915/16. Dokumente aus dem Politischen Archiv des deutschen Auswärtigen Amts" (The Genocide against the Armenians 1915/16. Documents from the Political Archive at the German Foreign Ministry) was published in 2005 by Klampen Verlag.