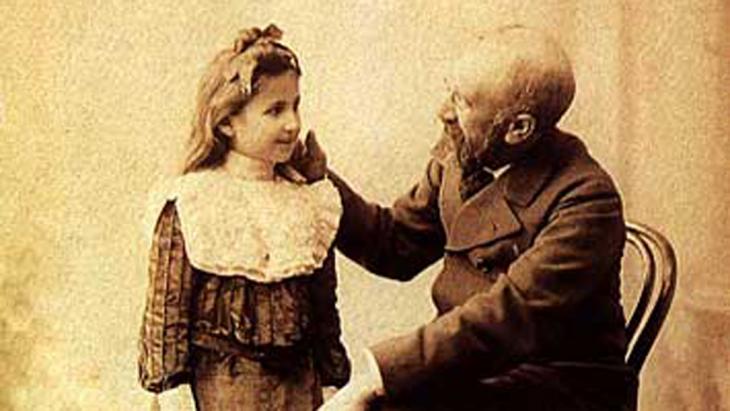 A reading Arab pulls in the crowds

His paintings fetch record sums in Turkey. Now the works of Osman Hamdi Bey are pulling in the crowds at Berlin's Alte Nationalgalerie, much to the delight of its young director. By Julia Voss

Sometimes, a single picture can change everything. This is precisely what happened to Philipp Demandt, director of Berlin's Alte Nationalgalerie (Old National Gallery), when he decided two years ago to display a painting in the museum foyer that had spent a long time abroad, in Turkey, in Istanbul, on loan to the German Consulate General.

"Arab Reading" is the name of the life-sized, two-metre-high painting. It is probably a self-portrait of the artist Osman Hamdi Bey (1842 to 1910), who presents himself in the 1904 work in oriental garments against an utterly surreal backdrop. But more about that later. In the case of Philipp Demandt, there was only one reason to hang it at the beating heart of his museum: he was immediately captivated by "Arab Reading".

The picture could certainly be described as eye-catching. The shimmering light green on an azure-blue background, the gleaming gold tones and dazzling red accents give the painting an iridescent glow. Like a signal, they direct the gaze into the centre of the scene, which Hamdi Bey creates with great artistic devotion. And precisely because it is a great work of art by a Turkish painter, Demandt chose it as the painting that would greet visitors to the Alte Nationalgalerie. But Demandt would never have dared to dream what happened next.

The first media outlet to report on the hanging of this spectacular painting at the Alte Nationalgalerie was "Huerriyet", the largest-circulation Turkish-language newspaper in Europe. The article appeared in May 2013. It was an edition to remember. At the top of the page was an image of the grinning Beate Zschaepe, a defendant in the Munich NSU murder trials – murders that were flippantly dubbed the "kebab killings" by the German media because they primarily targeted Turkish immigrants. This was the ugly face of Germany.

Beneath the article that went with this photo was one small, upbeat piece of news from Germany. "Visitors flock to see man reading the Koran" was "Huerryiet" reporter Ali Varli's headline. A short explanatory text provided the key background information to the accompanying image: the oil painting by Turkish artist Osman Hamdi Bey was now being exhibited in one of Berlin's most popular museums of art; its worth was estimated to be several million euros. 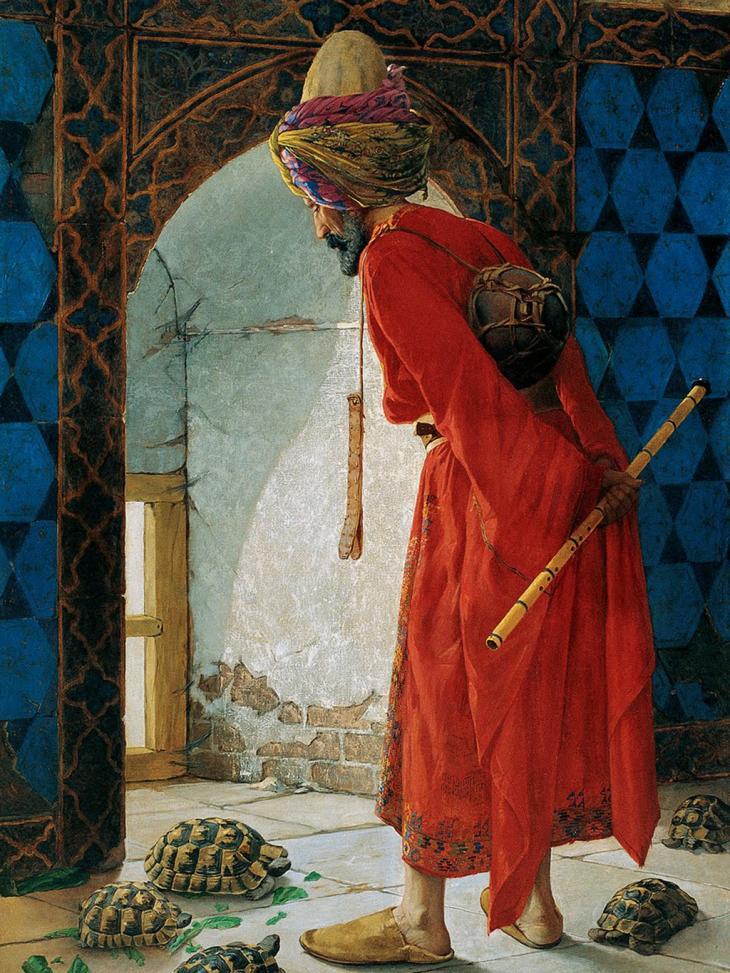 In Turkey, Osman Hamdi Bey's most famous painting, "The Tortoise Trainer", fetched five thousand billion Turkish Lira (around 3.5 million dollars) at auction in Turkey in 2004, making it the most expensive painting ever to be sold at a Turkish auction

Perhaps it was a coincidence that the two reports appeared on the same page; perhaps it was deliberate. The fact remains: the Alte Nationalgalerie visitor profile underwent a radical overhaul. Since then, Philipp Demandt regularly sees groups of headscarf-wearing women in the museum foyer taking photos of Hamdi Bey's painting with their iPhones, or he greets Turkish-speaking married couples having their picture taken in front of the work – and these are just the more obvious cases of people now being referred to as "visitors with a migrant background".

How many such visitors have been drawn to the Alte Nationalgalerie since the painting was displayed cannot be gauged in numbers. Anyone buying a ticket to the gallery is asked to provide his or her postcode, not their life story or family background. But even without specific statistics, anyone familiar with the museum and who observes its evolution can ascertain that a single painting has achieved something that many museums in Germany have been striving for for several years: a steadily growing stream of visitors with a migrant background.

In this respect, Osman Hamdi Bey's "Reading Arab" in the foyer of the Alte Nationalgalerie is more than simply an example of a picture that was forgotten and has now acquired a prominent place in the museum.

Cultural exchange between Germany and Turkey

When the German government adopted a National Integration Plan in 2007, it called on museums and galleries to display a greater intercultural openness as part of the initiative. Two years later, in 2009, the German Museums Association established a "migration" working group tasked with compiling a paper of recommendations on the issue of "Museums, Migration and Cultural Diversity". The figures are well-known: 15 million people with a migrant background live in Germany, some 19 per cent of the population. To date, however, this diversity has barely been reflected in the numbers visiting the country's museums.

What can be done to address this? There are a great number of projects in place in Germany's museums. For example, the German Hygiene Museum in Dresden has just opened a new exhibition titled "Das neue Deutschland. Von Migration und Vielfalt" (The New Germany. On Migration and Diversity). The Staatsgalerie in Stuttgart offers a programme of art discussions in Turkish, Greek and Russian. In Hamburg, the Kunsthalle is attempting – with the help of religious scholars – to help people see paintings in its collection from a Christian, Jewish and Islamic perspective.

A nationwide project for all museums is "Kulturelle Vielfalt im Museum: Sammeln, Ausstellen und Vermitteln" (Cultural Diversity in the Museum: Collect, Exhibit and Impart) inspired by the successful English initiative "Revisiting Collections". And until early April of this year, the Interior Ministry is seeking applications for the project titled "Alle Welt: Im Museum" (All the World: In the Museum) from teams made up of museums and independent migrant organisations for ideas to encourage larger numbers of people with a migrant background to visit museums.

But the Alte Nationalgalerie case is unique. When Philipp Demandt discovered the "Reading Arab" in his museum's collection and fell in love with it, Hamdi Bey was unknown in Germany only. In Turkey, he had long enjoyed star status: his most famous work, "The Tortoise Trainer", fetched five thousand billion Turkish Lira (around 3.5 million dollars) at auction in 2004. That made it the most expensive painting ever to be sold at a Turkish auction, now the property of the "Suna and Inan Kiraç Foundation" that runs the private Pera Museum in Istanbul. 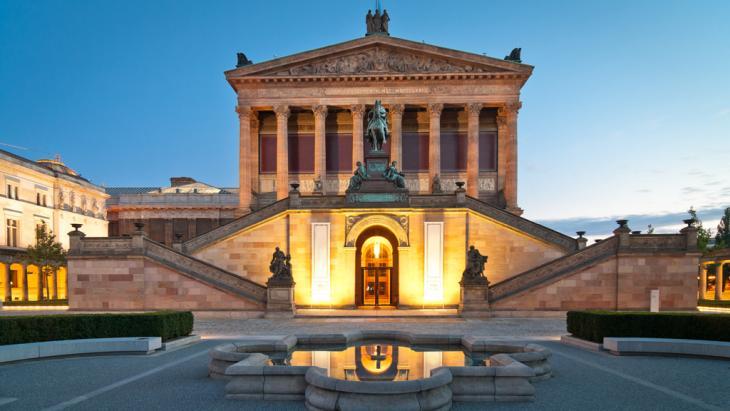 When "Arab Reading", a life-sized painting of a man reading the Koran, by Turkish painter Osman Hamdi Bey, was hung in the Alte Nationalgalerie in Berlin, people with a migrant background began flocking to the museum to see this work of art for themselves

The record price tag catapulted Osman Hamdi Bey into the public consciousness. The glory was long overdue: Osman Hamdi Bey, born in 1842, was a painter, politician, historian, archaeologist and museum director. He founded the Archaeological Museum in Istanbul, becoming its director in 1881. Himself tutored in Paris by historical painters such as Jean-Léon Gérôme, he also ran his own school of painting. His efforts led to the passing of Turkey's first antiquities law in 1884, which sought to protect ancient cultural treasures. In his painting he promoted one thing above all else: Turkey's national cultural heritage, its preservation and exploration.

A pleasure for all museum visitors – regardless of their background

The "Reading Arab" is also an expression of this. What else is the Arab doing apart from reading? He is leaning, as though it were nothing, against the ornamental box elaborately decorated with mother of pearl, known as a "Koran box" used to store the Islamic holy scripture. The object painted by Hamdi Bey comes from the Topkapi Palace collection, and is therefore a magnificent piece that no one would have been allowed to lean against in such a fashion. The scene is therefore completely fictional.

Of course, the gesture is not intended as contemptuous; on the contrary, Hamdi Bey is expressing his own affinity with the faith. In view of his tireless commitment to the retention of national cultural treasures in his own country, the painting exudes a resilient pride. In the year 1888, just a few years after large sections of the Pergamon Altar had been taken from the Ottoman Empire to Berlin, Osman Hamdi Bey gifted Berlin museum director Wilhelm Bode with a first painting titled "Carpet Dealer on the Street". It is a depiction of the flourishing trade in antiquities in Istanbul. The buyers are tourists with pith helmets and parasols. This painting has also recently been put on display at the Alte Nationalgalerie.

The Alte Nationalgalerie is one of the most popular museums in Berlin. Up to 400,000 people come every year to see works like Caspar David Friedrich's "Wanderer Above the Sea of Fog" or Adolph von Menzel's "The Iron Rolling Mill". "Osman Hamdi Bey", says Philipp Demandt, "enjoys a comparable status in Turkey to that of Caspar David Friedrich in Germany. His pictures are also derived from a great historical fantasy; they are images of yearning that have a symbolic meaning."

Home
Print
Newsletter
More on this topic
The Turkish Art Scene: "Offside, But a Goal!"Culture in Turkey before and after Gezi: The end of Cool IstanbulThe Istanbul Biennial: A Missed Opportunity for ArtInterview with Elif Shafak: "In Turkey, a Novel Is a Public Statement"
Related Topics
Art, Dialogue of Cultures | Intercultural Dialogue, Integration in Germany, Islamic art, Migration in Germany
All Topics

Koshary is probably the most popular street food in Cairo. The Egyptian national dish, which consists of chickpeas, noodles, lentils, rice and tomato sauce, also lends its name to ... END_OF_DOCUMENT_TOKEN_TO_BE_REPLACED

Omid Nouripour fled Iran for Germany with his family at the age of 13. Today, he is foreign policy spokesman for Germany’s Green Party. He argues that societal differences should ... END_OF_DOCUMENT_TOKEN_TO_BE_REPLACED

Last week Egypt's police stepped up an "unprecedented escalation" on activists by arresting a leading rights group director. Advocates on the Nile have long weathered a crackdown ... END_OF_DOCUMENT_TOKEN_TO_BE_REPLACED

What drives young men into the arms of Islamist extremists – and how can they be re-integrated into society? Five years after the deadly attacks in Paris, urgent questions remain ... END_OF_DOCUMENT_TOKEN_TO_BE_REPLACED

Austria's chancellor is seeking to criminalise "political Islam". The move would put non-violent, non-radical Muslims under blanket suspicion and is hardly helpful in the fight ... END_OF_DOCUMENT_TOKEN_TO_BE_REPLACED

Rather than suspecting Muslims in general, we need to co-operate more with Islamic scholars, Muslim congregations and associations, writes Muhammad Sameer Murtaza in his ... END_OF_DOCUMENT_TOKEN_TO_BE_REPLACED
Author:
Julia Voss
Date:
Mail:
Send via mail

END_OF_DOCUMENT_TOKEN_TO_BE_REPLACED
Social media
and networks
Subscribe to our
newsletter