The editor-in-chief of a science journal in Turkey is losing her job for planning to publish a story on Charles Darwin and his theory of evolution. Kai Strittmatter provides details from Istanbul 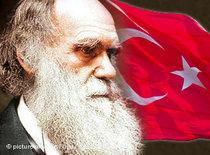 Evolutionary theory under fire: The Scientific and Technological Research Council of Turkey recently cancelled a cover story in its magazine marking the 200th birthday of Charles Darwin

​​One can tell that the whole affair makes Turkey's minister of state in charge of science and research, Mehmet Aydin, uncomfortable: "Why should we fight about Darwin?" he asked, trying to sweep the questions aside. "The man has already been dead for so long."

That may be true, but even from beyond the grave, Charles Darwin and his theory of evolution are still able to raise quite a commotion among those who consider themselves creation's crowning glory.

This week it was Turkey's turn. The world is celebrating the Year of Darwin, and in honour of this occasion the tradition-steeped magazine "Bilim ve Teknik" (Science and Technology) wanted to treat readers to an appraisal of the British scientist's achievements.

That turned out to be a bad idea. Darwin was booted from the issue and the editor-in-chief lost her job. And although she has meanwhile been reinstated, and despite the fact that the Publishers have issued a statement contesting the assertions, the Turkish press has yet another scandal on its hands, and Turkish policymakers are embroiled in a further heated debate on the influence of religion on politics.

​​Up to the beginning of this week, "Bilim ve Teknik" was regarded as the only popular science magazine in Turkey that could be taken seriously. But now, just a few days later, some journalists have started to put the word "science" in quotation marks when referring to the journal.

"There are days when you feel proud of your country and days when you could just sink into the ground for shame", commented media scholar Haluk Sahin in the liberal newspaper "Radikal".

What happened here exactly? Editor-in-chief Cigdem Atakuman had prepared a 16-page feature on Charles Darwin and his groundbreaking research to mark the Year of Darwin. The magazine and cover picture (the young Darwin) were ready to go to print when at the last minute an objection was voiced. From above.

According to the press, Professor Ömer Cebeci, vice president of the Scientific and Technological Research Council of Turkey (Tübitak), was the one who blocked the story. Tübitak is the publisher of the magazine.

Darwin was banished, replaced by a cover story about climate change, and the March issue came out one week late as a result. Editor-in-chief Atakuman received verbal notification that she had been relieved of her post.

Moustaches on the face or on the brain

Now Turkey has its own "Darwin scandal". Many suspect that opponents of evolutionary theory are behind the censorship, "minds that evolution has passed over without a trace" (Hürriyet), people "who have a moustache on their face or perhaps on their brains" (Turkish Daily News).

This is an allusion to the ruling AKP Party, whose leading functionaries almost all sport the moustache of the pious Anatolian Muslims. 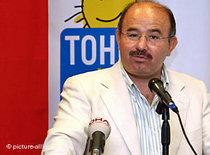 New impetus for Opponents against the theory of evolution: Education Secretary Hüseyin Celik avows himself officially to the hypthesis of "Intelligent design"

​​Two things are incurring the rage of critics. For one, the AKP's drive to put its own people in charge of all of the country's institutions and authorities, while casting qualified staff out on the street (a drive, however, that previous regimes demonstrated in equal measure).

The second accusation is one that the AKP has had to defend itself against ever since it took office in 2002: opponents of Premier Tayyip Erdogan claim that his government is bringing Islam into politics.

Often, this reproach is merely a cheap polemic in a bitter struggle for power. The AKP has long grown out of its roots in political Islam and regularly avows its support of secularism.

But the wary secular press likes to jump on any pious words uttered by AKP politicians, even more so when it thinks it has detected a hint of duplicitous bigotry therein. This was recently the case when Finance Minister Kemal Unakitan flew to the USA for an operation and his wife told journalists (who naturally asked why the minister had not chosen a Turkish hospital) that she had prayed and God's hand had pointed her toward Cleveland.

Party functionaries repeatedly allow themselves gaffes that provide further grist for their adversaries' mill. One such lapse was the failed 2004 proposal to outlaw extramarital affairs. And now the Darwin censorship.

Instigated by "Tübitak" of all things. The council has a government mandate to promote research and development, its mission being to turn Turkey into a knowledge society. "The censorship did not surprise me", says Namik Kemal Pak, "Tübitak's" chairman in pre-AKP days: "Something like this can happen when science becomes politicised."

​​Last summer the AKP pushed through legislation in parliament giving it control over "Tübitak". The new chairwoman and her deputy, the one who ousted Darwin, are both AKP members.

Granted, there are other opponents of evolutionary theory in Turkey besides those in the AKP – in a 2006 survey, only one out of four Turks said they believed in evolution. As early as 1985, when the generals tried to drive out communism with the help of religion, Creationism already became part of the school curriculum.

Oktar is convinced that Darwin is to blame for Hitler, Stalin and Mao, for savage capitalism and for terrorist acts by the PKK. Oktar is a bizarre figure, but his crude theories – modelled on those of the American Evangelists – have met with a widespread response. His travelling exhibition of fossils that supposedly refute evolutionary theory can be admired in Istanbul's subway stations.

High-level AKP politicians have in the meantime denounced the way "Tübitak" handled the incident at "Bilim ve Teknik", among them the state minister in charge of scientific affairs. The council must not be permitted to impose censorship, scolded Mehmet Aydin:

"It should instead provide a forum for all those who have served science", said the minister with regard to Darwin, adding: "No matter how wrong they are."

Opponents of Evolution in Turkey
Mr Oktar and the Internet
The notorious Turkish creationist Harun Yahya is sending free copies of his book, The Atlas of Creation, an anti-evolution manifesto, to people all over the world and no longer shrinks from having Turkish courts block websites nationwide. Kai Strittmatter in Istanbul has the details

Debate over Creationism in Turkey
Evolution under Pressure
In Turkey, scientists and academics are voicing concerns that the country's Islamic-rooted government is increasingly siding with the country's powerful creationist lobby. Dorian Jones reports

Tendencies towards Islamisation in Turkey
Power Struggle between Laicism and Islam
The political climate of the last few years in Turkey has made it possible for conservative religious elites to expand into more public domains and extend their social and political influence. Ömer Erzeren examines this development

END_OF_DOCUMENT_TOKEN_TO_BE_REPLACED
Social media
and networks
Subscribe to our
newsletter