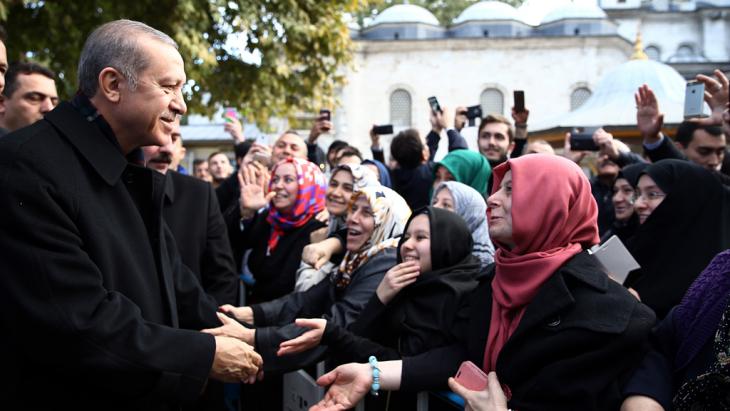 Can Recep Tayyip Erdogan distance himself from the paternalistic style of government he has favoured in the past? Having been granted a considerable mandate by the Turkish population at the beginning of November, those in the AKP administration can surely afford to take a more benign approach to minority groups and those advocating peaceful dissent. By Sinan Ulgen

The outcome of Turkey′s latest general election – voters have gone to the polls twice in the last five months – reveals important insights into the nature of the country′s democracy and the preferences of its citizens.

The first of Turkey′s two parliamentary elections this year, in June, was widely viewed as a referendum on President Recep Tayyip Erdogan′s efforts to strengthen the powers of his office. The result was clear. Erdogan′s Justice and Development Party (AKP) received just 41% of the vote, costing it the majority it had enjoyed since coming to power in 2002.

On 1 November, however, after negotiations following the June elections resulted in a hung parliament, Turks voted again, and the outcome could not have been more different. This time, the election was predominantly perceived as a referendum on the continuation of single-party rule, and the AKP won 49% of the vote, providing it with a comfortable majority.

In the run-up to the latest election, Erdogan and the AKP emphasised the importance of the party′s parliamentary majority for Turkey′s political stability. The opposition countered with the argument that a coalition government would counter the country′s deep political polarisation, while helping to establish stronger checks and balances. The promise of stability proved to be the more resonant message. 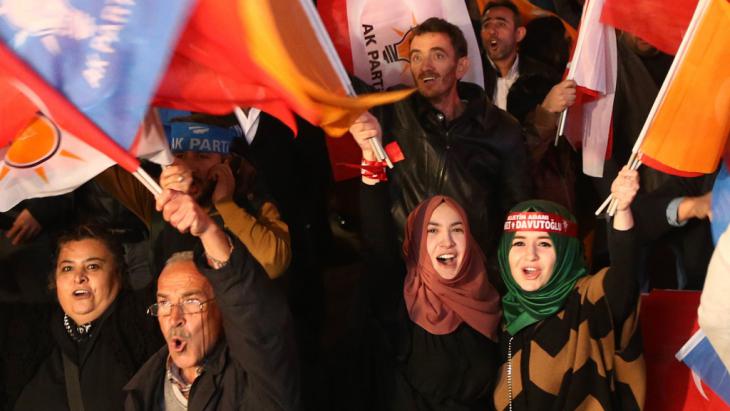 Celebrating a landslide: "the party received nearly five million more votes than it did in June, corresponding to a 20% increase in its popularity"

The political instability following June′s inconclusive election had been compounded by a sharp decline in domestic and regional security. A renewed campaign of violence by the separatist Kurdistan Workers′ Party (PKK) and attacks by Islamic State, including suicide bombings in Ankara that killed more than 100 people, created a backdrop that reinforced the AKP′s message.

The outcome of the vote attests to the ineffectiveness of Turkey′s parliamentary opposition, which once again failed to make a dent in the AKP′s popularity, almost as if they had set out to disprove the theory that electorates simply tire of long-serving governments.

Instead the AKP obtained its landslide victory – a major achievement after 13 years of uninterrupted rule – by siphoning voters from its competitors. The party received nearly five million more votes than it did in June, corresponding to a 20% increase in its popularity. Two opposition parties, the conservative Nationalist Movement Party (MHP) and the predominantly Kurdish Peoples′ Democratic Party (HDP), together lost three million votes, while the centre-left Republican People′s Party (CHP) held its ground, finishing second with 25% of the vote.

Voters punished the nationalist MHP severely for its obstructionism following the June election, when it refused all offers to join a coalition government. With 12% of the popular vote, compared to 16% in June, the MHP lost almost half of its parliamentary seats. The HDP was handicapped by its inability to distance itself from the PKK, which a large section of the electorate regards as being responsible for the upsurge in domestic violence.

Indeed, the HDP seemed at risk of failing to obtain the 10% of the vote it would need to enter parliament, an outcome that would have provided the AKP with a majority large enough to amend the constitution on its own. In the end, HDP ended with 10.75% of the vote, down from 13% in the June elections, preventing Erdogan from securing the compliant parliament he would need to establish an executive presidency. 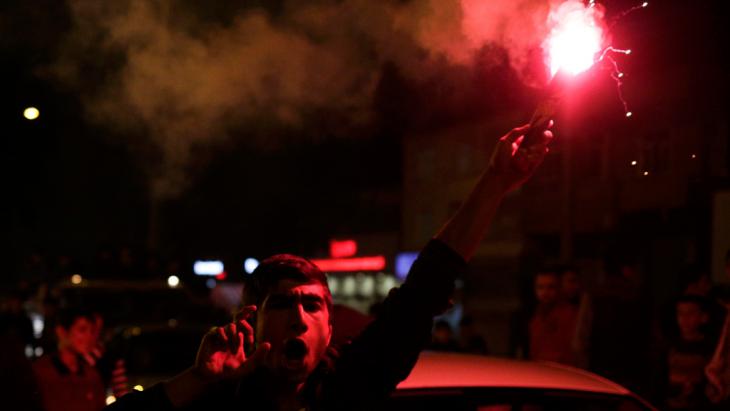 Dangerous bedfellows: the HDP lost ground during the general election owing to its ongoing association with the PKK, which many regard as being responsible for the renewed upsurge in violence

Nonetheless, Turkey′s new government has been provided with a broad enough mandate to address some of the country′s most difficult and imminent policy challenges – most notably the peace process with the Kurds. A previous effort had been suspended ahead of the election, as the PKK returned to violence and the AKP′s leadership adopted increasingly nationalist and hawkish rhetoric. With the election over, however, there is hope that the new government will restart the negotiations. If successful, the talks would have a major impact not only domestically, but also on the ongoing fight against Islamic State.

The AKP′s majority will also enable it to continue to recalibrate the country′s foreign policy. Turkey′s policies following the Arab Spring had led to a loss of influence and friends in the region; but recently the country has begun to adapt its approach to the realities on the ground. For example, Turkey has lifted its objections to a role for Syrian President Bashar al-Assad in negotiations to end the civil war in Syria. Similarly, a new commitment to the struggle against Islamic State has eliminated a core point of friction with Turkey′s Western partners.

The main trap the new government must avoid is a return to a heavily paternalistic style of governance. The AKP should take comfort in its large majority and start to view minority views and even peaceful dissent more benignly, in a way that befits a country negotiating accession to the European Union. The lesson of the two elections is clear: Turkey′s voters want a strong, stable government, but not one that runs roughshod over its opponents.

Sinan Ulgen is Chairman of the Istanbul-based Centre for Economics and Foreign Policy Studies (EDAM) and a visiting scholar at Carnegie Europe in Brussels. He is co-editor of the book ″Turkey’s Nuclear Future″.

Education for girls and women is still possible in Afghanistan, says Reinhard Eroes of the Kinderhilfe Afghanistan initiative. In interview with Elisa Rheinheimer, he talks about ... END_OF_DOCUMENT_TOKEN_TO_BE_REPLACED

Locals in the Middle East have said European critics are showing bias and hypocrisy when they condemn Qatar. Observers agree that Qatar has had to deal with more criticism than ... END_OF_DOCUMENT_TOKEN_TO_BE_REPLACED

In Doha, Arabs from Morocco, Tunisia, Egypt and Algeria are gathering to celebrate the first ever FIFA World Cup to be held on Arab soil. The criticism from Europe? Over the top, ... END_OF_DOCUMENT_TOKEN_TO_BE_REPLACED

Canan Topcu came from Turkey to Germany as a child. In her essay, she describes how bothered she was by the racism she encountered in her country of origin when she travelled ... END_OF_DOCUMENT_TOKEN_TO_BE_REPLACED

All organisers use major sporting events like this year’s FIFA World Cup in Qatar primarily to advertise their country and promote a slick public image. This is not something we ... END_OF_DOCUMENT_TOKEN_TO_BE_REPLACED
Author:
Sinan Ulgen
Date:
Mail:
Send via mail

END_OF_DOCUMENT_TOKEN_TO_BE_REPLACED
Social media
and networks
Subscribe to our
newsletter