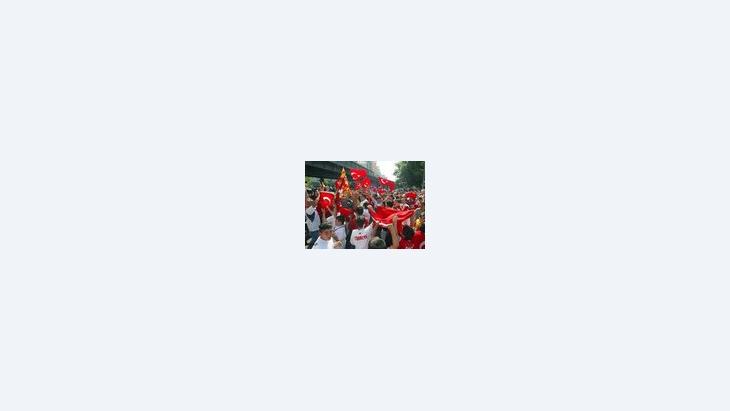 ​​Turkey’s Prime Minister Tayyip Erdogan begins his first official visit to Germany on Monday on a hopeful note. Two days earlier, in a sign that Berlin may be loosening its restrictive stance towards Ankara in the face of looming EU accession, German Foreign Minister Joschka Fischer told the Handelsblatt newspaper that the government could consider easing an arms export ban to Turkey.

​​"In the past we ruled this out on the basis of the facts. When facts change, you have to reevaluate the question according to the changed conditions," he said. Fischer (photo) added that Turkey was working "intensively and with complete earnest to get the door to the European Union open further."

The newspaper reported that even Chancellor Schröder’s office and the Defense Ministry believed that restrictive export policies to Turkey could no longer be kept up if the EU decided by the end of 2004 to invite Ankara for accession talks. The arms export ban, which has stopped Berlin supplying its NATO partner Turkey with battle tanks, is believed to refer in particular to a request by Ankara in 2001 for Leopard II tanks. At the time, the request was shot down by the Greens, the junior coalition partner in Germany’s government which led to a strain in relations between Ankara and Berlin.

​​The change in stance is bound to delight Erdogan (photo) who comes to Germany, home to the largest Turkish community outside Turkey, equipped with hopes that Berlin will support his country’s bid to join the European Union. In an interview with the Süddeutsche Zeitung on Saturday, Erdogan said, "Germany should take a leading political role with regard to Turkey’s EU accession process." Erdogan said he was convinced that current problems could be solved quickly if Turkey entered the EU. "If the EU doesn’t accept Turkey, the losses for both sides would be much greater."

Erdogan added that Turkey had earned membership to the EU. "Turkey is currently making important progress in the democratization process as well as in social and economic stability," he said. Erdogan is expected to meet Chancellor Schröder on Tuesday and discuss the planned EU accession as well as the situation in Iraq and the Middle East.

Turkey not European enough for conservatives

But it won’t just be a warm welcome awaiting Erdogan, when he touches down in the German capital on Monday.
German politicians have long been split over the issue of predominantly Muslim Turkey entering the largely Christian European Union. While the German government comprising the Social Democrats and Greens are in favor of Turkish EU entry, the conservative opposition is vehemently opposed to it on grounds that Turkey’s cultural identity and history are not European enough.

​​The conservatives point to a recent case, which they say proves the point that Turkey isn’t ready for the EU. Last week a Cologne court ruled that a radical Turkish Islamic fundamentalist leader, Metin Kaplan (photo), jailed on charges of inciting murder, could not be deported to Turkey, because there was no guarantee he would not be tortured or receive a fair trial there.

Head of the opposition Christian Social Union (CSU) fraction in parliament, Michael Glos said on Saturday, the Kaplan case showed that "it’s a mistake on the part of the Social Democrat-Green government to push Turkey’s EU membership." Glos said Turkey’s "economic situation and the fact, that it belongs to a completely different cultural sphere" were reason enough for the CSU to oppose its entry. At the same time Glos announced that the CSU wanted to make its rejection of Turkey’s full EU membership an election issue during European polls in 2004. Even Bavarian Interior Minister Günter Beckstein of the CSU approved of the hard line. "Turkey is an EU candidate country. The German government has failed to extract reliable promises from it in time, such as the banning of torture," he said.

END_OF_DOCUMENT_TOKEN_TO_BE_REPLACED
Social media
and networks
Subscribe to our
newsletter