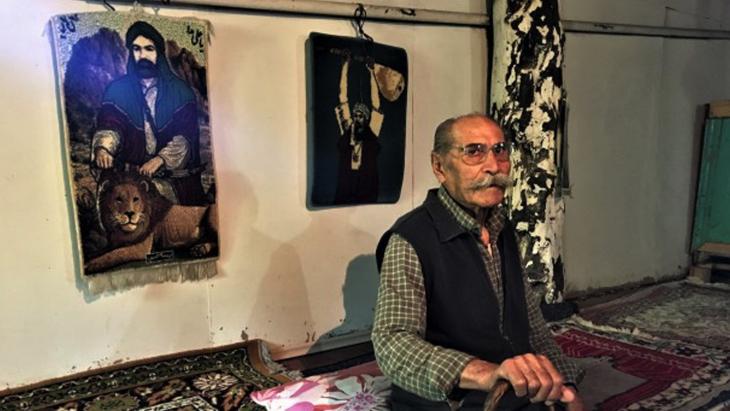 Turkish music
Fighting for freedom with the lute, not the sword

The poetry of Pir Sultan once prompted uprisings in the Ottoman Empire. To this day, Alevis identify with him. Rainer Hermann visited Mehmet Celebi, a direct descendant of the medieval bard, who lives in the house Pir Sultan built in a tiny mountain village in Turkey

It's lonely on the high plains of Anatolia. The little hamlets dotted around here are no longer marked on any maps. Snowmelt has turned the valleys a lush green; a shepherd leads a flock of sheep across the pasture. Even in early summer, the mountaintops are still covered with snow. Above the track snaking down to the hamlet of Haciliköy, the mountains soar 2,500 metres high; behind them, an even higher peak is a towering 3,500 metres. The stream here is a tributary of the Pülümür Cayi, which carves a path through one of the most beautiful valleys in all Anatolia. Further downstream, the Pülümür Cayi flows into the Keban Dam reservoir, becoming part of the Euphrates.

In the 1970s, there were almost 100 households in Haciliköy. Today, only six are left. Mehmet Celebi and his wife, both 90 years old, live in a modest, flat-roofed house in the same style as all the others in the hamlet, whether inhabited or empty. Their only luxury consists of a covered veranda guarded by their Anatolian sheepdog, Kangal.

Direct descendant of a folk hero

Mehmet Celebi was just a few years old when the officials of the young Turkish republic spread out across the country. Every citizen was assigned a family name – it had not been the custom for them to have one in the time of the Ottoman Empire. From then on, his family was called Celebi. This was the name the young state gave to leaders of religious orders, which it had banned.

Celebi is a direct descendant of Pir Sultan Abdal (1480–1550), whom many Alevis venerate almost as a saint. But Pir Sultan did not found a religious order, like that of the Mevlevi, or whirling dervishes. Instead, he championed the poor and disenfranchised. His protests against the Ottoman authorities are legendary. They considered him a troublemaker and had him executed near his birthplace of Sivas. 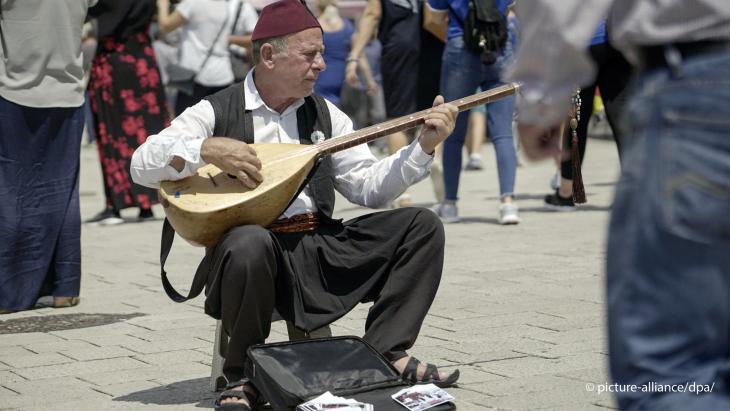 Most images of Pir Sultan, whether in picture or statue form, show the poet holding a baglama, a long-necked lute, above his head as a symbol of the triumph of freedom and justice. He is revered for his poetry and the way he championed the poor and disenfranchised. Pictured here: a man plays the baglama

Pir Sultan led an itinerant life, travelling as far as Ardabil in what is now Iran. A master there told him his place was in Anatolia, so he returned to his homeland. He built a house in the little village now known as Haciliköy and started a family. His descendants have lived in the house ever since, and a festival is held there at the end of January every year in his honour. A cemevi, also built by Pir Sultan, is attached to the house. Alevis gather there for religious ceremonies.

Fighting with music instead of weapons

Mehmet Celebi sits right beside the door, where Pir Sultan would also sit. This is the place of honour, reserved for his descendants. The dim room is able to accommodate more than 100 people. There are brick benches against the walls, rugs are spread out on the floor, and the walls are hung with depictions of people the Alevis regard as holy: the twelve Shia imams, starting with Ali; Ali as the first great martyr and lion tamer; Haci Bektas Veli, the great philosopher of Alevism; and, of course, Pir Sultan himself.

His iconographic image can be found in almost every Alevi household. It shows the bard brandishing a baglama, a long-necked lute, above his head as a symbol of the triumph of freedom and justice. Alevis, who make up a fifth of the Turkish population, still identify with Pir Sultan to this day – as do many Turkish leftists. They often recite poems attributed to him. His poetry prompted uprisings during the Ottoman Empire. The language of his poems is pithy and succinct. Many of his metaphors about God, nature and, above all, love of mankind are shaped by Islamic mysticism.

One of his best-known poems is "Don't Sing, Nightingale". It encapsulates his struggle, which he fought with a long-necked lute instead of a weapon. "If you get news of me, it'll be with the brave ones," he sings. "You'll swaddle my wounds with the martyred ones / For forty years, I've roved with deer of the mountains / My friend, from your suffering, I burn and burn." In the final stanza, he contemplates his death: "For my strong love of the truth, I was hanged."

Pir Sultan wrote his poems in Turkish. The Alevis' ancestors had arrived in Anatolia centuries earlier from the Turkish homeland in Central Asia by way of the Iranian highlands. Some continued to speak Turkish, while others brought Zaza with them from Iran, a north-west Iranic language that is spoken in the villages around Haciliköy. 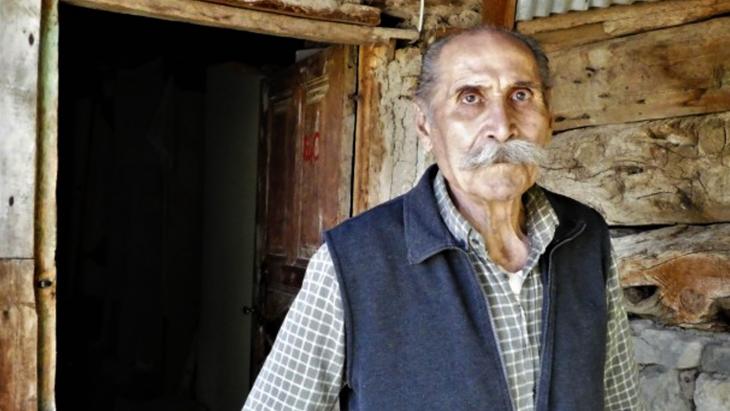 Pir Sultan built a house in the little village now known as Haciliköy in Turkey. His descendants have lived in the house ever since. A cemevi, also built by Pir Sultan, is attached to the house. Alevis gather there for religious ceremonies. Pictured here: Mehmet Celebi

Mehmet Celebi speaks a very pure, clear Turkish; he doesn't use the Arabic-Persian loan words that became common under the Ottomans, or any modern idioms. Of the Ottomans, Celebi says: "They were Sunnis, and they banned us from practicing our faith." That was why the Alevis retreated into the remote mountain regions of Anatolia. "They persecuted us because we were always on the side of the oppressed." Like the bard Pir Sultan, whom they hanged: "Because he never sided with the rulers."

In spite of his distinguished ancestor and social status, Mehmet Celebi's life has been a simple one. He farmed, cultivated grain and raised cattle in the village where he was born. He also passed on the teachings of the master, which contain the essence of Alevism. He sums this up as follows: "Be truthful and righteous, do no evil and don't steal, don't lie, stay clear of malicious gossip, show solidarity and help each other."

Mehmet Celebi calls this "philosophy of life". It is the state, he says, that throws relations between people into disarray, because it discriminates, excludes people. In Turkey, Alevis are no longer persecuted, but they do still experience discrimination. They are still not represented in the higher offices of state or ranks of the army. The state treats them as Muslims, and does not recognise them as an independent religion.

He was badly impacted by the terrorist activities of the PKK. They came in the night, says Celebi, and took food and clothing from them with violence. Then, state policies of forced evacuation and the destruction of villages drove the vast majority of Alevis to migrate. The village communities of old, rural Anatolia are no more. But while this village has now shrunk to the size of a hamlet, it is still hugely important for Alevis. The Celebis will not abandon it.

Translated from the German by Charlotte Collins.

The quotations from "Don't Sing, Nightingale" are taken from Thomas Parker's translation from the Turkish, published in the Bosphorus Review of Books: https://bosphorusreview.com/dont-sing-nightingale

Home
Print
Newsletter
More on this topic
Turkish incursion into northern Syria: You reap what you sowChallenging Turkish history from the ground up: "The stories of our families"Photo gallery: The last years of the Ottoman Empire
Related Topics
Alevism | Alevi, Freedom of religion, History of the Near and Middle East, Literature, Turkish literature, Turkish music
All Topics

Relations between Turkey and Russia are ambivalent. Moscow is nonetheless trying to prop up the leadership in Ankara. Elections are to be held in Turkey in June – and the last ... END_OF_DOCUMENT_TOKEN_TO_BE_REPLACED

All eyes in Turkey are on a court hearing scheduled for January 30 into a child abuse case that allegedly occurred with the knowledge of one of Istanbul's most powerful Islamic ... END_OF_DOCUMENT_TOKEN_TO_BE_REPLACED

Any reconciliation between Turkey and Syria’s Assad regime would have disastrous consequences for many Syrians, explains Syria expert Kristin Helberg END_OF_DOCUMENT_TOKEN_TO_BE_REPLACED

There are signs of an imminent normalisation of relations between Turkey and Syria. This would allow Erdogan to score political points domestically before the upcoming elections ... END_OF_DOCUMENT_TOKEN_TO_BE_REPLACED

Turkey will mark the centenary of the proclamation of the Turkish republic in October. But 2023 will be an important year in another respect too: Turks will go to the polls in ... END_OF_DOCUMENT_TOKEN_TO_BE_REPLACED

END_OF_DOCUMENT_TOKEN_TO_BE_REPLACED
Social media
and networks
Subscribe to our
newsletter