The Turkish parliament has lifted the headscarf ban in Turkish universities. The Kemalist opposition sees this as a threat to basic democratic values, and intends to appeal to the supreme court. Susanne Güsten in Istanbul looks at the background to the issue 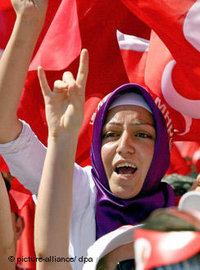 The proportions of Turkish society have been shifted. Two out of three Turkish women now wear headscarves, three out of four Turks approve of allowing the headscarf at universities

​​The two scenarios are similar. In the latest case, the leader of the opposition in the Turkish parliament, Deniz Baykal, has been unable to prevent the majority from passing legislation which, in his view, will call into question the principle of laicism. Baykal has warned, has issued appeals and threats – but to no avail. So the country's chief Kemalist is turning to the courts.

It was a similar story when the former foreign minister, Abdullah Gül, was a candidate for the presidency last year. Now that students will be allowed to wear Islamic headscarves, Baykal appeals to the constitutional court.

Last year, Baykal was only able to hold up Gül's election, but not prevent it. And as in the case of the presidency, while it's evident that Baykal may have the courts on his side, he certainly doesn't have the support of the people.

There is scarcely another topic which so divides Turkish public opinion as that of the headscarf. For some it is a matter of personal freedom. Of course the state should not tell an adult citizen what she is allowed to wear to university. For others it is an attack on the republic's fundamental principle of laicism. Of course the state cannot just watch while Islamists undermine it.

One thing is certain: the issue is a relatively new one in the history of modern Turkey. Headscarves at university only became an issue in the nineteen-eighties, when the country's economic success meant that the daughters of conservative religious Turks suddenly found themselves in higher education.

Until then, the urban Kemalist elite, which looked for its inspiration to the founder of the state, Mustafa Kemal Atatürk and which had been the defining force in Turkey for decades, had had the universities to themselves. Women with headscarves worked, if at all, in factories or as domestics.

Kemalists lose their grip on strongholds

But that has changed fundamentally, even if some Kemalists do not want to see it. Even an observer who can scarcely be accused of sympathy for the Islamists, like the editor of the liberal daily "Radikal", Ismet Berkan, accuses the Kemalists of closing their eyes to the reality in the country.

One sees women with headscarves even in the expensive shopping centres of metropolitan centres like Istanbul, or driving expensive jeeps. The conservative religious classes, who have been gaining wealth and self-respect under the government of the prime minister, Recep Tayyip Erdogan, are becoming more and more visible even at the heart of former Kemalist strongholds.

The headscarf is a symbol of this social revolution. The proportions of Turkish society have been shifted. Two out of three Turkish women now wear headscarves, three out of four Turks approve of allowing the headscarf at universities, four out of five members of parliament voted for the constitutional amendment getting rid of the ban.

Kemalist resistance in the constitutional court

But a clear majority is only one side of the story. The other side is the vehement resistance of the Kemalists, who may be in the minority, but who see themselves as the representatives of progress. Members of Baykal's party, the CHP, describe the lifting of the ban as "sick" and "mediaeval". 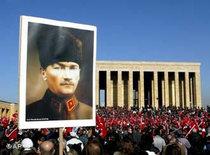 Turkey's old secular elite, which includes army generals, judges and university rectors, fears the lifting of the ban will boost the role of religion and undermine the secular system

​​Following the passing of the amendment to the constitution, Baykal himself said, "Our hopes rest with the constitutional court." The main argument behind their case is that lifting the ban on headscarves contradicts the pre-eminent national principle of laicism. Erdogan's party, the AKP, rejects the accusation that the presence of headscarves at university would undermine laicism. After all, students in the West don't have problems with headscarves.

And even in future, schoolgirls, teachers and members of parliament will still not be allowed to wear headscarves.

Baykal fears that the students' headscarf will only be the start of a process of Islamisation. One CHP member of parliament says that the process will only end with "Al-Qaeda terrorism." Baykal is confident that the constitutional court will quickly overturn the lifting of the ban. It was that court which, in 1989, determined that the headscarf was an Islamic symbol.

No polite exchange of well-thought-out arguments

The atmosphere is tense, and there is no room for subtlety. A group of intellectuals recently went public with the proposal that the ban on the headscarf should be lifted, but only after a thorough discussion throughout society, in which all views were considered. In the light of the vehemence with which the two main protagonists, Erdogan and Baykal, attack each other, the idea that there might be a polite exchange of well-thought-out arguments is likely to remain a pious hope.

Will the dispute over the headscarf end up like the battle over the presidency last year? There is one significant difference. Last year, the army, which is on the side of the Kemalists, threatened a putsch against a Gül presidency. This year, even arch-Kemalists like Baykal insist that the army must stay out of the debate.

The respected columnist, Murat Yetkin, says that Baykal realises that many voters wanted to punish his CHP party in July's parliamentary election, as a protest against the intervention of the military in the dispute about the presidency.

He considers that if Turkish politicians have really reached the conclusion that the interference of the military in political matters does more harm than good, then the row over the headscarf will have at least had the positive effect of helping Turkey in the process of its political maturity.

Constitutional Reform in Turkey
Entrenched Fronts
In the Turkish parliament a package of constitutional and statutory amendments is currently under discussion. A central issue is whether the ban on wearing headscarves at the universities should be repealed, as Erdogan's ruling AKP Party has proposed. Günter Seufert reports from Istanbul

Headscarf Debate in Turkey
A Political Issue Par Excellence
One of the biggest promises made by politicians of the current government was to lift the ban on headscarves at universities. Critics regard the attempt to lift the ban a fundamental threat to Turkey's secular state. Ömer Erzeren reports

END_OF_DOCUMENT_TOKEN_TO_BE_REPLACED
Social media
and networks
Subscribe to our
newsletter