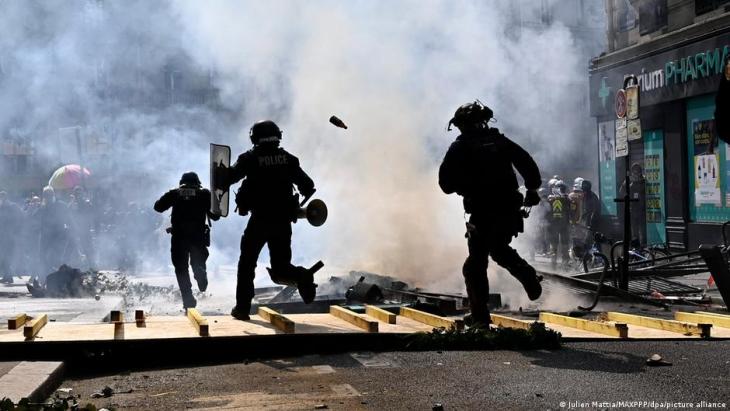 Turkish police on Sunday detained more than 160 protesters who were trying to hold a May Day rally in defiance of a ban imposed by the governor's office.

AFP images showed riot police clashing with protesters near Istanbul's Taksim Square, pinning some of them forcefully to the ground before rounding them up in a police car.

The Istanbul governor's office said 164 people were held after staging "an unauthorised rally" and refusing to disperse despite police warnings. An agency photographer saw around 20 protesters detained near Taksim Square.

There are often detentions during the annual May 1 workers' holiday. Taksim has been a flashpoint on May Day with frequent clashes since 34 people were killed there on 1 May 1977. A small group led by the Confederation of Turkish Revolutionary Trade Unions attended an officially approved event at Taksim Square.

A usually bustling square lined with cafes and hotels, Taksim was also the epicentre of 2013 anti-government protests. Protests initially erupted over an attempt to save adjacent Gezi park from demolition at the hands of the government but grew into a broader movement against President Recep Tayyip Erdogan, who was then prime minister.

An Istanbul court on Monday condemned leading rights activist Osman Kavala to life in prison, a ruling that stunned Turkish civil society and prompted criticism from Ankara's Western allies. He was convicted of financing the 2013 protests.

The court also handed 18-year jail terms to seven other defendants, including architects, urban planners, a film producer and academics.

In the meantime, thousands gathered on Sunday on the Asian side of Istanbul in an authorised rally to celebrate May Day.

END_OF_DOCUMENT_TOKEN_TO_BE_REPLACED
Social media
and networks
Subscribe to our
newsletter