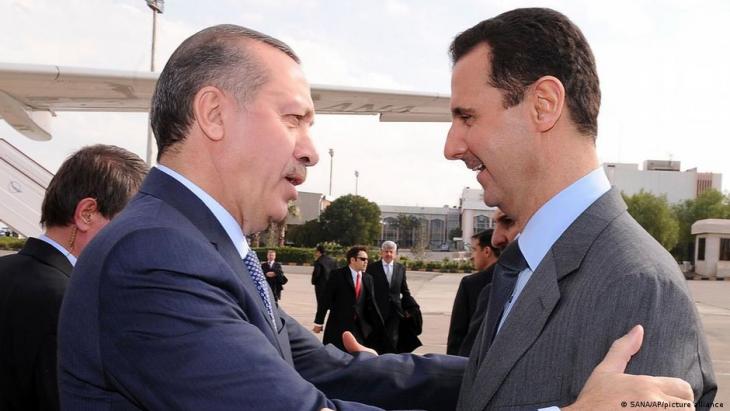 Any reconciliation between Turkey and Syria’s Assad regime would have disastrous consequences for many Syrians, explains Syria expert Kristin Helberg

Turkish President Recep Tayyip Erdogan has described his upcoming meeting with Syrian strongman Bashar al-Assad as a "new peace process". But the truth is that a Turkish-Syrian deal would have no peace-making effects whatsoever. On the contrary: it would only worsen the plight of many of those living in Syria, put Syrian refugees in Turkey in danger, spell the end of Kurdish self-determination, help to rehabilitate Assad in the international community and strengthen his criminal regime.

Erdogan's motivation for his about-face on Assad is to retain power. If he wants to win the parliamentary and presidential elections in early summer, he needs to present some concrete success stories. Erdogan hopes that two key campaign issues – the nearly four million Syrian refugees living in Turkey and the purported existential threat posed by Kurdish self-rule in north-eastern Syria – could be resolved with Assad's help.

At least that is the prospect being proffered by Russian President Vladimir Putin, who has been trying for years to bring the two rulers closer together. The Russians argue that were Ankara to normalise its relations with Damascus, the two countries could negotiate and jointly pursue both the repatriation of Syrian refugees and the dismantling of the Autonomous Administration of North and East Syria (AANES). 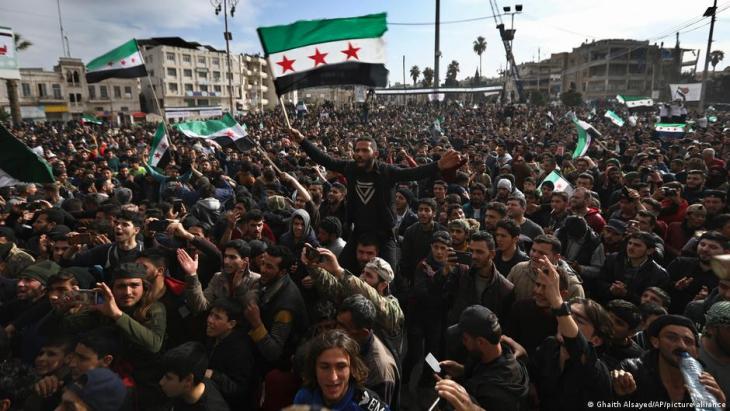 Anti-Assad protests in the province of Idlib in northwestern Syria, which is controlled by Islamist militias: Assad's recapture of Idlib is probably a long way off. Putin has evidently given Assad to understand that he should forget about retaking Idlib for the time being because Russia is currently embroiled in Ukraine and a military offensive would only drive millions of people into Turkey, leaving Erdogan to deal with even more refugees

Assad has indicated he would be open to such a plan, and yet he remains cautious, having no desire to aid Erdogan's campaign efforts. Turkey, after all, still occupies territory in northern Syria. In three military interventions in violation of international law, it has seized territory along the border between Afrin and Ras al-Ain (Sere Kaniye in Kurdish), which it controls with the help of Syrian Islamists and local governors. Several hundred thousand inhabitants, most of them Kurdish, have been displaced in the process.

Before agreeing to a meeting, Assad will want to see some gestures of goodwill that will allow him to save face – such as the opening of the strategically important M4 motorway, which runs through various zones of influence in northern Syria from the coast to the Iraqi border and is actually supposed to be secured by Russian-Turkish patrols.

Furthermore, Erdogan will have to show willing to withdraw Turkish troops from opposition territories and cede their administration to the Syrian regime. The Turkish president may agree to do so if the Syrian leader undertakes in turn to bring the northeast completely under his control again. The Kurdish-dominated autonomy project would then be dissolved, and Damascus would take over the administration of the area.

The Kurdish People's Defence Units (YPG) – regarded by the West as allies in the fight against the so-called Islamic State (IS), but by Ankara as terrorists due to their ideological ties to the PKK – would be incorporated into the Syrian army.

The implementation of all these plans would be complicated. What do Syrian refugees living in Turkey have to go back to if Assad controls all of northern Syria? Most of them fled the regime's violence and are neither welcome nor safe in the areas it controls. They will therefore not return voluntarily.

Although Human Rights Watch reports that Turkey is already deporting hundreds of Syrians back to their home country against their will, they usually end up either in Idlib province, controlled by the extremist HTS militia, or in Turkish-occupied areas. Once Syrian intelligence services are put in charge along the border, returnees will face persecution, extortion, forced recruitment, imprisonment, torture and death. Fearing the same consequences, people from north-eastern Syria can be expected to flee towards northern Iraq – because those who have been politically active in the past can no longer live under Assad's rule. 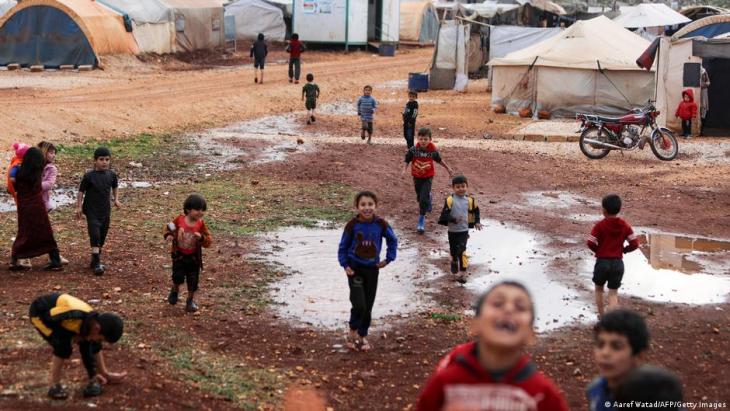 No prospects for Idlib: if Erdogan has his way, Idlib could become a gathering place for Syrian returnees – held in check by the HTS extremists and provided with makeshift humanitarian aid by the UN, funded predominantly by the West. This strategy would explain why Moscow so readily approved the extension of this cross-border support in the Security Council session on 9 January. For those in Idlib – four million civilians, many of them stranded in flimsy tents or ruined buildings without electricity or running water, without schools, regular work or any prospects for the future – life would become even more wretched

Russian support lacking for a Syrian reconquest of Idlib

The solution may lie instead in the northwest. Putin has evidently given Assad to understand that he should forget about retaking Idlib for the time being because Russia is currently embroiled in Ukraine and a military offensive would only drive millions of people into Turkey, leaving Erdogan to deal with even more refugees. Idlib could thus become a gathering place for Syrian returnees – held in check by the HTS extremists and provided with makeshift humanitarian aid by the UN, funded predominantly by the West.

This strategy would explain why Moscow so readily approved the extension of this cross-border support in the Security Council session on 9 January. For those in Idlib – four million civilians, many of them stranded in flimsy tents or ruined buildings without electricity or running water, without schools, regular work or any prospects for the future – life would become even more wretched.

Assad has adjusted his propaganda accordingly: enemy number one is no longer to be found in Idlib or the Turkish-occupied territories, but in the northeast. Instead of agitating against Ankara's "terrorists", the Syrian regime is now accusing the Kurdish fighters in the YPG of being "traitors" and "agents of the Americans". Imagined adversaries are always interchangeable – for Turkey as well as Syria. Turkey for its part is casting the Kurds as the common enemy, with fatal consequences for the self-determination they once wrested from the regime and fought for against IS.

For Assad, Erdogan's offer of talks is an opportune gift. A normalisation of relations between Ankara and Damascus would be a first major step back onto the international stage. He is already using the prospect of Turkish-Syrian talks to exert pressure on his Arab neighbours, who naturally want to keep Syria within their own sphere of influence rather than losing it permanently to their rivals Turkey and Iran.

What about Syria’s opposition exiled in Turkey?

The Syrian leader would definitely get the green light from Moscow should he set out to gradually supplant Kurdish self-rule and take over the oil and gas fields in the northeast. Under continued fire from Turkey, the AANES might agree to a deal with Damascus that Washington would have to accept. The Americans would withdraw, and thousands of foreign IS supporters would become Assad's pawns. 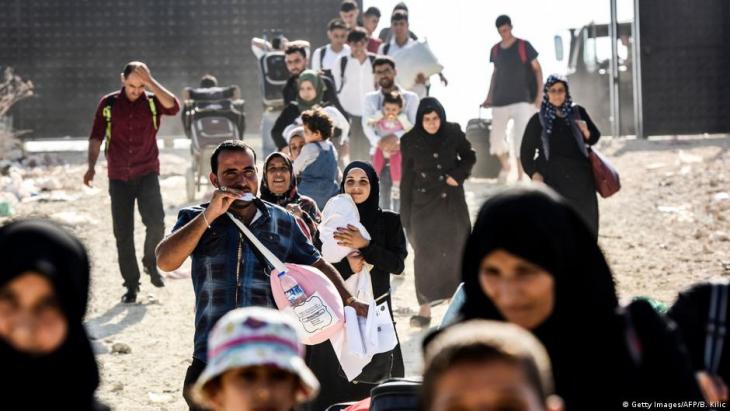 Turkey's Syrian refugees are an election issue: Erdogan wants to win the parliamentary and presidential elections in early summer and needs concrete successes to do so. He hopes two important campaign issues – Syrian refugees and the purported existential threat posed by Kurdish self-rule in northeastern Syria – could be resolved with Assad's help. The bitterest realisation for Syrians is that Erdogan's about-face will happen with or without him. If the majority nationalist opposition wins the presidential and parliamentary elections, it may come to an agreement with Assad even more quickly and send back more Syrians than the current government

Erdogan is already using the exiled opposition as a bargaining chip. Turkey not only finances the Islamist militias of the Syrian National Army (SNA) that are fighting their Kurdish compatriots on Ankara's behalf but is also harbouring the National Coalition, the largest alliance of opposition groups against Assad. Since the summer of 2022, Erdogan has been calling on the coalition to reconcile with Damascus – an outrageous demand from the opposition's point of view, given the Syrian regime's continuing crimes.

In the Turkish protectorates that the National Coalition co-administers, there have been repeated protests against any rapprochement with Damascus. In response, Turkish government officials have assured their Syrian allies they will not abandon them. And yet, in the event of an agreement, the National Coalition's days would be numbered.

Although many of its members have been discredited as incompetent vassals of Erdogan, the coalition has established itself over the years as the key voice of Syria’s opposition. If Turkey withdraws its support, there will be no official opposition organisation to take part in future diplomatic initiatives. This would be good for Assad, who would have even less reason to negotiate if there were no recognised counterpart. But perhaps it would also present an opportunity for millions of Syrians abroad to start thinking about new forms of self-organisation as they are forced to overcome ideological and social divides.

The bitterest pill for Syrians in all these developments is that Erdogan's about-face will happen with or without him. If the majority nationalist opposition wins the presidential and parliamentary elections in Turkey, it may come to an agreement with Assad even faster than Erdogan would have done and proceed to deport more Syrians than the current government has. And, since the party alliance also promises a return to the rule of law, Americans and Europeans could use the change in government as a chance to relaunch relations with Ankara. Criticism of Turkey's actions against the Kurds would then surely wane.

Political scientist and journalist Kristin Helberg lived in Damascus from 2001 to 2008, where she was the only officially accredited Western correspondent for a long time. Today she works as an author and Middle East expert in Berlin. She has written several non-fiction books, including "Verzerrte Sichtweisen – Syrer bei uns. Von Ängsten, Missverständnissen und einem veränderten Land" and "Der Syrien-Krieg. Lösung eines Weltkonflikts".

Iraq bears the scars of decades of conflict and has seen its antiquities plundered, yet the House of Manuscripts' collection has managed to survive END_OF_DOCUMENT_TOKEN_TO_BE_REPLACED

As Syrian camps housing families of Islamic State fighters get more dangerous, there are calls to bring children out, even if the mothers don't want to go. The idea of separating ... END_OF_DOCUMENT_TOKEN_TO_BE_REPLACED

Morocco has taken the 2022 World Cup by storm, with the northwest Africans reaching the semi-finals for the first time in their soccer history. As the knockout match approaches, ... END_OF_DOCUMENT_TOKEN_TO_BE_REPLACED

The Islamic Republic has been unable to quell the civil unrest that erupted three months ago, after Mahsa Amini died after being detained for violating hijab rules. Now the ... END_OF_DOCUMENT_TOKEN_TO_BE_REPLACED

The Kurds are under attack from two sides: from Turkey, and from Iran. The situation in their territories in northern Iraq is becoming increasingly desperate. Birgit Svensson ... END_OF_DOCUMENT_TOKEN_TO_BE_REPLACED

November 2022 sees the Arab world firmly in the spotlight with the COP27 in Egypt and the FIFA World Cup in Qatar. Public trust in MENA governments is weak, thanks to their ... END_OF_DOCUMENT_TOKEN_TO_BE_REPLACED
Author:
Kristin Helberg
Date:
Mail:
Send via mail

END_OF_DOCUMENT_TOKEN_TO_BE_REPLACED
Social media
and networks
Subscribe to our
newsletter