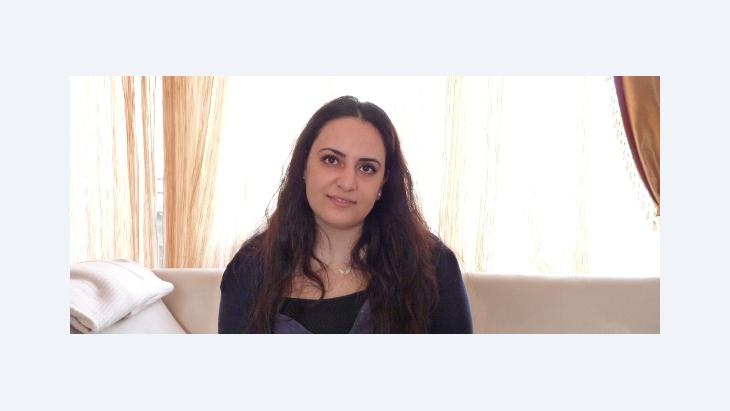 Turkish Victims of the NSU Murders in Germany

﻿Her father, Mehmet Kubasik, became eighth victim of the so-called NSU murders on April 4, 2006. In the lead-up to the neo-Nazi murder trials, daughter Gamze Kubasik discusses the terror of the past and her current hopes. Andrea Grunau reports

"Oh, no, now his daughter's got wind of it." That's the sentence Gamze Kubasik heard coming from the crowd that was standing outside her father's carry-out shop just after noon on April 4, 2006. Gamze was on her way to the kiosk to take over afternoon duties from her father. Instead, she was met with police cars, ambulances, flashing blue lights and sirens on four-lane Mallinckrodt Street in the northern part of Dortmund. A red-and-white plastic band barred entry to the shop; as Gamze attempted to go inside anyway, a police officer held her back.

Earlier that Tuesday morning, then 20-year-old Gamze had woken up her father to tell him she would take her little brother Mert to pre-school so that Mehmet could sleep a little longer. Her voice is shaky as she describes the encounter: "He said: 'Thanks for letting me know, sweetie," Gamze recalled. "That's the last time I saw him."

Mehmet Kubasik had lived in Germany for a decade and a half. As a Turkish-Kurdish Alevi and thereby part of a religious minority, he had no longer felt safe living in southeastern Anatolia at the end of the 1980s. He applied for asylum in Dortmund, and it was granted. Mehmet and his family became German citizens in 2003.

Mehmet always defended his new country, his daughter said. Germany and Mehmet were a good fit: the country was democratic "and so was he," his daughter observed. 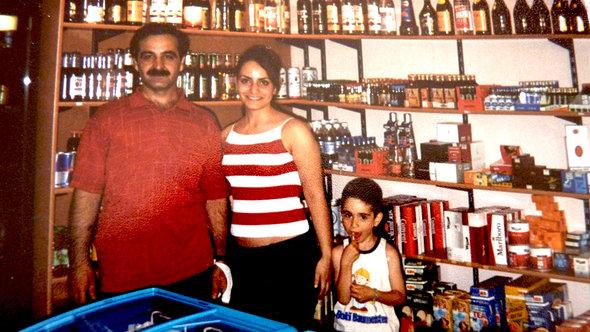 After Mehmet Kubasik was murdered by members of the racists NSU, the police suggested to his family he might have been involved in drug dealings. Mehmet Kubasik had come to Germany with his family as Turkish-Kurdish Alevi refugees. Gamze Kubasik says Germany and Mehmet were a good fit: the country was democratic "and so was he"

His murderer must have entered the kiosk between noon and 1 p.m. With a Ceska handgun, which had already been used to kill seven other men, the killer shot Mehmet Kubasik several times as he stood behind the sales counter. Two shots went to his head, catapulting him backwards against a shelf, according to a 2007 case analysis by the Baden-Württemberg State Office for Criminal Investigation, which Deutsche Welle has viewed.

It's been seven years since Mehmet died, but his murder still looms over the Kubasik Family. Just recently, said Gamze during this interview in her apartment in Dortmund, her mother Elif noticed two men behind her while she was shopping with a friend. Her mother thought they could well be neo-Nazis. She panicked.

Such encounters reoccur, said Gamze. She herself "often has panic attacks," she said, but she pulls herself together. The 27-year-old wants to be strong, especially during the trail of National Socialist Underground (NSU) supporters at the Munich Higher Regional Court. As one of around 70 joint plaintiffs, Gamze wants to see Beate Zschäpe and the other defendants in real life: "If they are truly human beings, they won't be able to deal with the family members [of the victims] being there and looking them straight in the eye," Gamze said.

Gamze said she wants justice for her father, but she also wants to prevent other families from having to suffer through what she and the families of the nine other NSU murder victims did. That's why she and Semiya Simsek, daughter of the first NSU victim Enver Simsek, spoke publicly to 1,200 people at the February 2012 commemoration service in Berlin. Gamze also spoke publicly at rallies in Dortmund. 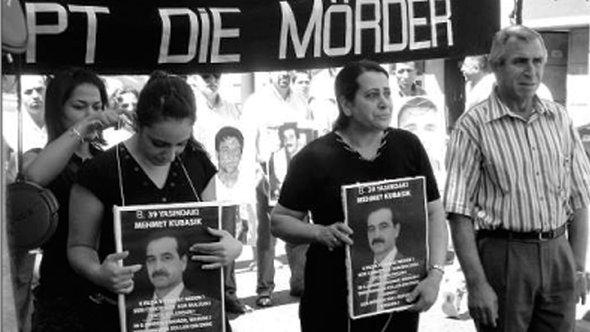 Gamze Kubasik says she wants justice for her father, but she also wants to prevent other families from having to suffer through what she and the families of the other NSU murder victims did. Pictured: The 2006 protest march in Kassel

In Berlin, German Chancellor Angela Merkel apologized for the suspicions surrounding the victims and their families that went on for years. The suspicions did not end until a video became public in November 2011 in which the National Socialist Underground claimed responsibility for the murders.

Elif and Gamze Kubasik were separately interrogated for six hours following Mehmet's murder. They were shocked by the questions they were bombarded with, said Gamze: "Did your father take drugs? Did your father sell them?" The police asked whether Mehmet was involved with the mafia and with the outlawed Kurdistan Workers' Party, PKK.

One police squad used dogs to search the Kubasiks' apartment; they pulled apart their father's car; they took saliva samples from Gamze and her two siblings. They found nothing. When Gamze suggested to them that right-wing extremists may have been responsible for her father's murder, police countered that there was no evidence of that.

Two days after Mehmet Kubasik's murder, 21-year-old Halit Yozgat was shot with the same Ceska weapon in Kassel. The media presented investigators' suspicions that the victims could have been involved in shady dealings. Gamze fell into "a big, black hole" as people began whispering behind her back all the time in Dortmund. She had no way of proving her father's innocence.

Carrying a burdon for years

The Kubasiks contacted the Yozgat Family, who also did not want to remain silent about their son Halit's murder. Kassel-based associations organized a demonstration in May 2006 entitled "No 10th murder," which saw 2,000 people participate, Gamze recalls. There, she met Semiya Simsek, with whom she is still friends. Semiya said back then: "Your father didn't have to die." 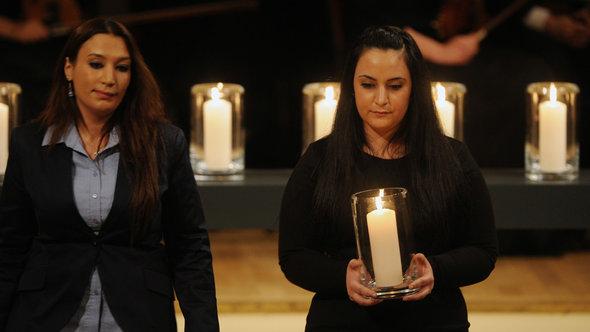 "Germany is where I'm from," she said. "I'm also German, and I won't let people take that away from me – or from my family. This country belongs to all of us, and not to the Nazis." Pictured: Semiya Simsek (l) and Gamze Kubasik at the commemorative service in Berlin in February 2012

In November 2011, one of Gamze's friends called her: "They found the people who killed your father, but they're probably dead. They just showed it on television," her friend said. Gamze tried calling her mother to tell her the news, but she can't speak through her tears. She had to calm down before she could continue.

It wasn't until that day that she realized what a burden she had been carrying all of those years. She was relieved that the suspicions surrounding her father had been refuted, she said. Although she herself suspected right extremists had murdered her father, she was still shocked that people are actually killed "simply because they have black hair or are of a different faith or look different," she said.

Shock and anger about investigation mistakes

Gamze was likewise shocked by and angry about the mistakes made during the investigations and by the Federal Office for the Protection of the Constitution, which in the meantime have come to light. The destruction of important files is just one of the mistakes. She cannot fathom how something like that could happen, given that Merkel had promised during the commemoration service that everything would be done to get to the bottom of the murders. As one of the family members of a murder victim, she asked, "Just how safe are we in this country?"

Even if she's aware that questions could remain unanswered during the NSU trial, she and her lawyer still want to fight for truth and justice. To that end, she would like support from Merkel and German President Joachim Gauck. The fact that the courtroom in Munich is much too small to accommodate all the journalists and observers covering the subject gives her the impression "that people want to push this trial to the sidelines," Gamze said.

Following her wedding, Gamze lived in Turkey for six months with her new husband, but they decided to come back.

"Germany is where I'm from," she said. "I'm also German, and I won't let people take that away from me – or from my family. This country belongs to all of us, and not to the Nazis."

Home
Print
Newsletter
More on this topic
Right-wing Extremism and Islamophobia in Germany: Sending out a Political SignalKenan Kolat: ''We Need an Open Debate about Institutional Racism''The Neo-Nazi Murders: When No One Takes a Stand for Decency
Related Topics
Integration in Germany, Islamophobia, Migration in Germany, NSU trial
All Topics

Ayaan Hirsi Ali’s new book "Prey" claims to examine how Muslim immigration threatens the rights of Western women. Indeed the injustices women face only seem to matter to her when ... END_OF_DOCUMENT_TOKEN_TO_BE_REPLACED

The Saudi national team is set to play the German Olympic squad at the Olympics in Tokyo later this month – a chance for the outsiders to make their mark. At the same time, and ... END_OF_DOCUMENT_TOKEN_TO_BE_REPLACED

I regret very much that I worked for the Bundeswehr. If the Taliban knock on my door, I hope they shoot me right away. Guest article by Ahmad Jawid Sultani END_OF_DOCUMENT_TOKEN_TO_BE_REPLACED

Muslims in Europe regularly experience threats, witness attacks and are the target of hate across national borders. Now the Council of Europe, the continent's leading human rights ... END_OF_DOCUMENT_TOKEN_TO_BE_REPLACED

The final defeat against Italy hurt England – but the racist insults against Saka, Sancho and Rashford were far more painful, revealing the deep rift running through English ... END_OF_DOCUMENT_TOKEN_TO_BE_REPLACED

END_OF_DOCUMENT_TOKEN_TO_BE_REPLACED
Social media
and networks
Subscribe to our
newsletter