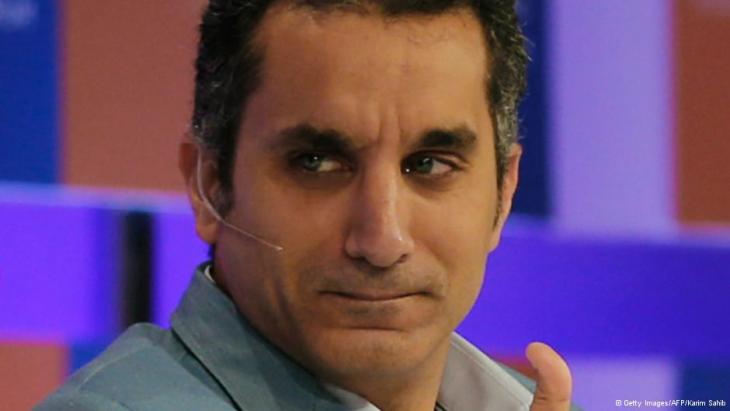 The political satire show "AlBernameg" attracted millions of Arab viewers each week before it was suddenly cancelled in November 2013. On Friday 7 February 2014, it returned to Egyptian TV screens on MBC Egypt. Jaafar Abdul-Karim and Khalid El Kaoutit spoke to its host and star, Bassem Youssef

Last time, your show was cancelled after just one episode. What's different this time?

Bassem Youssef: We only just finished producing, so if it's canned today, it would be like a false start [laughs]. I still hope that everything goes well, and I hope the decision makers are intelligent and reasonable enough not to make a fuss just because it's a satirical show.

There are people who criticise the show and say it's inappropriate to focus so much on political satire and criticism, and that at such a critical time for Egypt, everyone should stick together instead.

Are there certain issues that you've tried to steer clear of in this first episode?

Youssef: Which topics should we have avoided? We've been off air for six months, and a lot has happened in that time. So please reserve your judgment until the end of the season, not after a single episode. 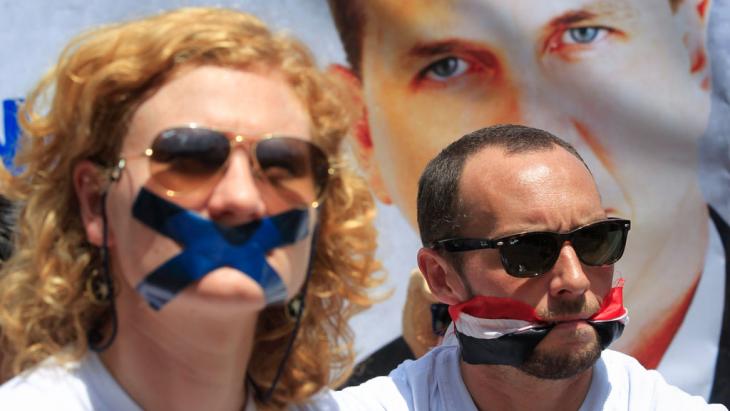 Nairobi-based foreign correspondents Phil Moore (R) and Jessica Hatcher (L) protesting against the imprisonment in Egypt of Al Jazeera journalist Peter Greste. On 29 January 2014, Egyptian prosecutors referred 20 people, including four foreigners, from the Al Jazeera TV network to trial for allegedly harming national security and spreading false news. The foreigners charged in the case include the Australian Peter Greste, a former BBC correspondent, who was arrested on 29 December, along with two Britons and a Dutch national

At the moment Egypt is quite a dangerous place for journalists. Many networks have red lines. How important is your programme for freedom of expression, particularly for young journalists?

Youssef: It's important to have other opinions out there. People should also be able to listen to different opinions. If the media always presents the same views, the people will turn their back on the media. It would be better if there was a kind of political movement. But I can understand that many people are scared and say it's not appropriate to broadcast differing opinions right now. I can understand that – in times when anxiety and fear prevail, it's always difficult to argue with logic, let alone with satire.

…people have certain expectations of you, they want to know what you're doing, how you are…

Youssef: … I try, and don't always succeed, to leave all the stress at work, so I can go home and sleep. It's pointless burdening yourself with all this pressure all day long. I try not to think about it too much. Last year was really stressful, and I hope this year will be better. The only pressure I really feel isn't political. It comes from wanting to live up to my expectations and present a really good show.

How has your life changed?

Youssef: I can't just freely walk on the street anymore. I don't have a private life. There's only work, and I spend the rest of my time with my wife and daughter. I don't go out as much. And as a public personality, people always point at you, and you're always getting accused of having said something or other.

Youssef: I just want to say to everyone, please take this show with humour and open-mindedness. Please don't get annoyed – there's nothing in the world that's worth getting angry about! Have fun!

Home
Print
Newsletter
More on this topic
Portrait of the Egyptian TV Satirist Bassem Youssef: Fighting over the ''Pantie Revolution''Egypt in Turmoil: Against the Tide of HatredInvestigations against a cloth puppet in Egypt: Theatre of the absurd
Related Topics
Abdul Fattah al-Sisi, Bassem Youssef, Democracy and civil society, Egypt Revolution 2011, Egypt's army, Freedom of the press, Power struggle in Egypt
All Topics

Algeria‘s regime is again cracking down on anti-fracking activists and the unemployed in the country‘s south. Yet EU countries remain keen to scale up their energy cooperation ... END_OF_DOCUMENT_TOKEN_TO_BE_REPLACED

The murder of a female student at Mansoura University in the Nile Delta has sparked a long overdue debate on femicide in Egypt. Karim El-Gawhary reports from Cairo END_OF_DOCUMENT_TOKEN_TO_BE_REPLACED

Syria, Egypt, Saudi Arabia and the UAE are among those countries increasingly misusing cybercrime legislation to silence dissent and curb freedom of speech. Could a new global ... END_OF_DOCUMENT_TOKEN_TO_BE_REPLACED

Egypt hopes to jump-start the action needed to face a warming world when it takes the presidency of major UN climate talks in November, but warns that countries need a "reality ... END_OF_DOCUMENT_TOKEN_TO_BE_REPLACED

A ceasefire has been in effect in Libya for the past year and a half. Yet after Russia's attack on Ukraine, another proxy war looms in Africa's most oil-rich country. Mirco ... END_OF_DOCUMENT_TOKEN_TO_BE_REPLACED

It is the biggest order in the history of the Siemens Group: a 2,000-kilometre railway network for high-speed trains is to be built in Egypt. But the project raises numerous ... END_OF_DOCUMENT_TOKEN_TO_BE_REPLACED
Author:
Jaafar Abdul-Karim and Khalid El Kaoutit
Date:
Mail:
Send via mail

END_OF_DOCUMENT_TOKEN_TO_BE_REPLACED
Social media
and networks
Subscribe to our
newsletter