UAE and Sheikh Maktoum under pressure
Dubai's double standards – where is Princess Latifa?

Dubai's ruler, Sheikh Mohammed bin Rashid Al Maktoum, has been doing a lot to change his country from a dusty oil-dependent spot in the desert to a modern, ultimately rich and oil independent business and tourism destination. Only last week, the country made headlines for its successful Mars space programme.

This week, however, the 71-year-old billionaire, who has been serving as vice-president and prime minister of the UAE since 2006, has been the focus of unwanted attention. In stark contrast to the country's otherwise well-administered news, growing pressure from global human rights organisations, the UN and international politicians have turned the focus on the alleged treatment of his daughter, Sheikha Latifa bint Mohammed Al Maktoum.

Princess Latifa is one of Al Maktoum's estimated 30 children of several wives and has two sisters bearing the same name. Ever since her escape and forced return to Dubai in March 2018, she has been held in a villa that she refers to as a "jail".

Tiina Jauhiainen and David Haigh, the co-founders of the Free Latifa campaign, have now released secretly recorded video footage, after they hadn't heard from Latifa in more than six months. "We lost contact over half a year ago, but I believe she is still alive," said Jauhiainen.

Following the publishing of secretly recorded videos shared with the BBC in which #SheikhaLatifa said she feared for her life, the @UN said it will question #UAE authorities about her detention and the UK's @DominicRaab is demanding proof of life. https://t.co/nYczgS6BmF

Latifa's lawyer, and co-founder of the campaign, David Haigh of Detained International, a legal advocacy NGO in the UK is also pressing for her release. He has called on UAE President Sheikh Khalifa bin Zayed Al Nahyan and Crown Prince Sheikh Mohammed bin Zayed bin Sultan Al Nahyan "to order the UAE Vice President and Dubai's ruler Sheikh Mohammed bin Rashid Al Maktoum to release his hostage daughter without further delay and end a horrendous period of parental and human rights abuse that has significantly damaged the reputation of the UAE and has disgusted the world."

Amnesty International, Human Rights Watch as well as the UN and several politicians have followed suit and have called on Sheikh Al Maktoum to present evidence that Princess Latifa is still alive.

Hiba Zayadin, a Gulf researcher for HRW, has also pointed out that Latifa's older sister, Princess Shamsa, "hasn't been seen since she was snatched off the streets of Cambridge in 2000." In 2019, London's High Court of Justice concluded that Shamsa, now around 40 years old, had been abducted, flown to France and had forcefully returned to Dubai. "In doing so, it [the court] cast a spotlight on the United Arab Emirates’ sheer disregard for the rule of law — both within and outside its borders," Zayadin posted on Twitter. 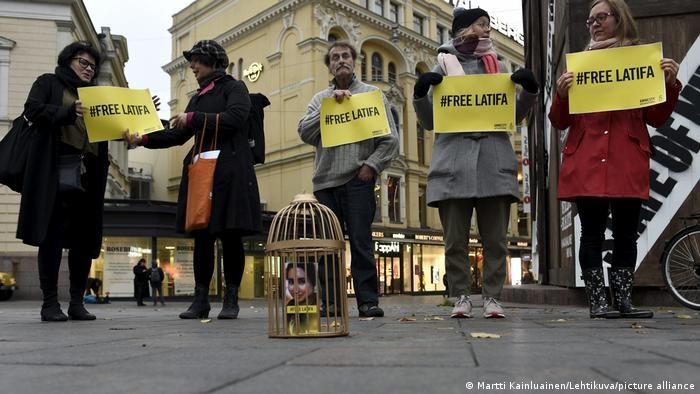 Pressure growing for Latifa's release: last week, Tiina Jauhiainen and David Haigh, co-founders of the Free Latifa campaign, released secretly recorded video footage received from Latifa, having heard nothing from her for more than six months. "We lost contact over half a year ago, but I believe she is still alive," said Jauhiainen. The Finnish sports instructor and Latifa's best friend of is pinning her hopes on U.S. Joe President Biden following his involvement in the release auf Saudi Arabia's human rights activist Loujain Al-Hathloul

Kenneth Roth, Executive Director at Human Rights Watch, is also scathing about Latifa's treatment. "Dubai benefits from a repressive neighbourhood to portray itself as a bastion of liberalism, but behind the glistening facade is an uglier reality where critics are jailed, the rights of migrant workers are limited, and the ruler of Dubai locks up his adult daughter for wanting to escape life under his thumb," he pointed out.

Rupert Colville, spokesperson for the Office of the United Nations High Commissioner for Human Rights confirmed on Twitter that "we will certainly raise these new developments with the UAE."

It should not be forgotten that a British court judgement issued in March 2020 already holds the Emir of Dubai responsible for the kidnapping of Latifa and another daughter, Sheikha Shamsa. The same court ruling found Sheikh Mohammed guilty of intimidating his sixth wife, Princess Haja Bint al-Hussein. The latter had caused an international stir in the summer of 2019 when she fled to the UK with her eight- and twelve-year-old children. The emir denied all accusations.

Dubai has been meticulously constructing and successfully investing in its reputation as an open-minded focal point in the UAE. As a tax-free business destination and hub for the Far East, it presents itself as far more liberal than its neighbours Saudi Arabia, Oman or Saudi Arabia.

Luxury hotels and a myriad of attractions have turned the country into a tourism magnet with the industry contributing around 12% (around $43 billion, €35 billion) of the country's GDP in 2019. That is expected to rise to 12.4% (around $72 billion) in 2027, according to the emirate's official numbers.

Alongside its focus on consumerism in the absence of historical or natural attractions, it has been also very open-minded about online influencers residing in the country to boost its image.

As early as 2018, Dubai's National Media Council issued licensing fees at the annual price of AED 15,000 (around $4,000, €3,000) for "any paid or unpaid form of presentation and/or promotion of ideas, goods, or services by electronic means, or network applications." The income generated by Dubai-based influencers remains tax-free.

International influencers have embraced the opportunity. Since then, the number of perfect sunsets and beautiful people have become even more conspicuous to help show off the way the country is seen, or likes to be seen. The trend picked up during the winter months of the pandemic, as Dubai welcomed people (provided they had a negative PCR-test) with open restaurants, shopping malls and tourist attractions.

Last week, Germany's satirist and TV-host Jan Bohmermann took a swipe at German influencers like Sami ‎Sliman (1.4 million followers on Instagram) or Simon Desue (2 million followers), who have recently moved to Dubai. While these Internet celebrities now benefit from the latest reforms of the Islamic laws in November 2020 that make "honour killings" a crime, allow unmarried couples to live together; and permit people above 21 to consume or bring alcohol to their private homes, they still have to stick to the emirate's rules on their Instagram or Twitter accounts.

Kissing, swearing or openly supporting LGBT-rights is not permitted. And while Princess Latifa's story would make a great plot for any James Bond movie, it certainly won't find its way into the official Instagram sunsets.

Arab youth express their hopes and wishes for the New Year, spanning everything from civil and political rights, to education, to arts and culture. By Rafiah Al Talei END_OF_DOCUMENT_TOKEN_TO_BE_REPLACED

With World Cup 2022 around the corner, Qatar has embarked on a campaign to clean up its school system. Distracting from grievous shortcomings in other areas by highlighting a ... END_OF_DOCUMENT_TOKEN_TO_BE_REPLACED

Moncef Marzouki was Tunisia's first democratically elected president after the fall of dictator Ben Ali. Today he is the most prominent critic of increasingly counter- ... END_OF_DOCUMENT_TOKEN_TO_BE_REPLACED

Asef Bayat, professor of Sociology at the University of Illinois, Urbana-Champaign, has been studying revolutions and how they affect people since 1979. In his recent book, " ... END_OF_DOCUMENT_TOKEN_TO_BE_REPLACED

The catastrophic human rights situation in Bahrain is being largely ignored by the rest of the world. Despite all the damning evidence, which includes a Human Rights Watch report ... END_OF_DOCUMENT_TOKEN_TO_BE_REPLACED

The city of Marib is the most important place of refuge in Yemen for those displaced in the country. But fighting between Houthi rebels and government troops is currently ... END_OF_DOCUMENT_TOKEN_TO_BE_REPLACED
Author:
Jennifer Holleis
Date:
Mail:
Send via mail

END_OF_DOCUMENT_TOKEN_TO_BE_REPLACED
Social media
and networks
Subscribe to our
newsletter