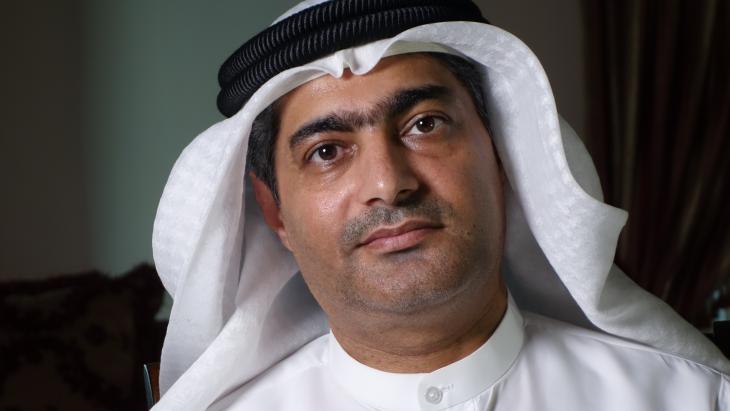 Germany's PEN has appointed blogger, poet and human rights defender Ahmed Mansoor, imprisoned in the United Arab Emirates since March 2017, as an honorary member and is demanding his unconditional and immediate release. Mansoor is one of the few independent voices to have publicly denounced human rights violations in the country.

More than a year after his arrest, on 31 December 2018, the State Security Chamber of the Supreme Court in Abu Dhabi confirmed the ten-year prison sentence and a fine of 1,000,000 UAE-Dirham (around 240,000 euros) against Mansoor. He was found guilty of, among other things, "insulting the rank and reputation of the United Arab Emirates and its symbols" and "spreading false information to damage the reputation of the United Arab Emirates abroad". Mansoor's appeals have now been exhausted. Mansoor has been on hunger strike several times in protest against his conditions of detention and beatings by the prison guards. He is in solitary confinement and is said to have neither a bed nor access to water. His state of health has deteriorated considerably.

"Freedom of expression and human rights have been severely restricted in the United Arab Emirates for many years. Neither Ahmed Mansoor's conviction nor the conditions of his imprisonment are acceptable. The Executive Board of the German PEN Center expresses its full solidarity with Mansoor and asks the German government to lobby the relevant authorities of the United Arab Emirates for the unconditional release of our honorary member," explains Ralf Nestmeyer, Vice President and Writers-in-Prison Commissioner of the German PEN.    (PEN)

Home
Print
Newsletter
More on this topic
Political activism in the Gulf: The UAEʹs policy of zero toleranceUAE foreign policy and the Crown Prince of Abu Dhabi: Hardly a ruler in waitingSaudi Arabian and UAE foreign policy: A finger in every pie
Related Topics
All Topics
Date:
Mail:
Send via mail

END_OF_DOCUMENT_TOKEN_TO_BE_REPLACED
Social media
and networks
Subscribe to our
newsletter