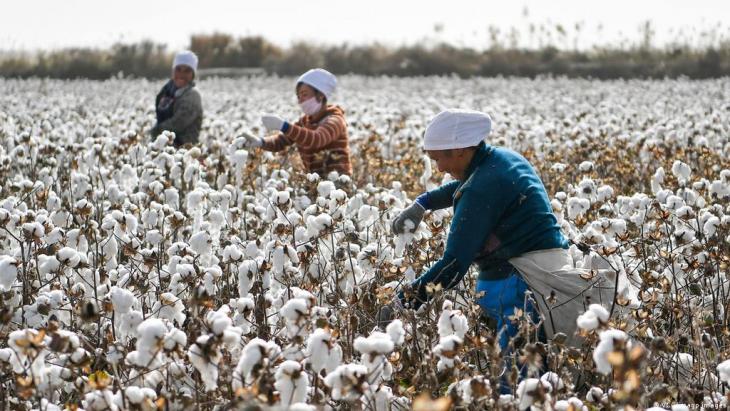 A Uighur organisation and a human rights group are taking the U.K. government to court to challenge Britain's failure to block the import of cotton products associated with forced labour and other abuses in China's far western Xinjiang region.

Tuesday's hearing at the High Court in London is believed the first time a foreign court hears legal arguments from the Uighurs over the issue of forced labour in Xinjiang. The region is a major global supplier of cotton, but rights groups have long alleged that the cotton is picked and processed by China's Uighurs and other Turkic Muslim minorities in a widespread, state-sanctioned system of forced labour.

The case, brought by the Munich-based World Uighur Congress and the Global Legal Action Network, a non-profit, is one of several similar legal challenges aimed at putting pressure on the U.K. and European Union governments to follow the lead of the United States, where a law took effect this year to ban all cotton products suspected of being made in Xinjiang.

Researchers say Xinjiang produces 85% of cotton grown in China, constituting one-fifth of the world's cotton. Rights groups argue that the scale of China's rights violations in Xinjiang – which the U.N. says may amount to "crimes against humanity" – means that numerous international fashion brands are at high risk of using cotton tainted with forced labour and other rights abuses.

Gearoid O Cuinn, the Global Legal Action Network's director, said the group submitted almost 1,000 pages of evidence – including company records, NGO investigations and Chinese government documents – to the U.K. and U.S. governments in 2020 to back its case. British authorities have taken no action so far, he said.

"Right now, U.K. consumers are systematically exposed to consumer goods tainted by forced labour," O Cuinn said. "It does demonstrate the lack of political will."

Researchers and advocacy groups estimate that 1 million or more people from Uighur and other minority groups have been swept into detention camps in Xinjiang, where many say they were tortured, sexually assaulted, and forced to abandon their language and religion. The organisations say the camps, along with forced labour and draconian birth control policies, are a sweeping crackdown on Xinjiang's minorities.

A recent U.N. report largely corroborated the accounts. China denounces the accusations as lies and argues its policies were aimed at quashing extremism.

In the U.S., a new law gives border authorities more power to block or seize cotton imports produced partly or wholly in Xinjiang. The products are effectively banned unless the importer can show clear evidence that the goods were not produced using forced labour.

The European Commission last month proposed prohibiting all products made with forced labour from entering the EU market. The plans haven't been agreed upon yet by the European Parliament.

The British government's Modern Slavery Act requires companies operating in the U.K. to report what they have done to identify rights abuses in their supply chains. But there is no legal obligation to undertake audits and due diligence. In a statement, the U.K.'s Conservative government said it is "committed to introducing financial penalties for organisations that do not comply with modern slavery reporting requirements."

Lawyers representing the Uighurs will argue at the High Court on Tuesday that the British government's inaction breaches existing U.K. laws prohibiting goods made in foreign prisons or linked to crime.

Former Conservative Party leader Iain Duncan Smith, one of the most vocal China critics in Britain's Parliament, said the U.K. has been "dragging its feet" on the issue because of "huge institutional resistance to change" after years of dependence on trade with China. Britain's Conservative government has not taken the China threat seriously enough, he argued.

"Treasury and the business department are desperate not to destroy ties with China and (officials) are still living in project kowtow," Duncan Smith said. Compared to the U.S. and the EU, "we are bringing up the rear" on the cotton issue, he added.

Earlier this month, O Cuinn's organisation made a separate submission to the Irish government demanding a halt to the import of forced labour goods from Xinjiang. Meanwhile, lawyers representing a survivor of detention and forced labour in Xinjiang have also written to the U.K. government threatening to sue over the issue.

The claimant in that case, Erbakit Ortabay, said he was detained in internment centres, where he was tortured and beaten, and later forced to work for no pay in a clothing factory. Ortabay, who was eventually released in 2019, is currently seeking asylum in Britain.

Clothing is among the top five type of goods the U.K. imports from China, accounting for about 3.5 billion pounds ($4 billion) in imports in 2021. The U.K. does not publish shipping data detailing trade with the Xinjiang region.

But Laura Murphy, a professor of human rights at Sheffield Hallam University, has identified 103 well-known international fashion brands – including some trading in the U.K. – at high risk of having Xinjiang cotton in their supply chains because they buy from intermediary garment manufacturers, which in turn are supplied by Chinese companies that source cotton in Xinjiang.

"What we find is that a lot of Xinjiang cotton is also sent out to other countries to be manufactured into apparel. So it's not always coming directly from there – it might be coming from a company making clothes in Indonesia or Cambodia," Murphy said.

In the U.S., the new ban on Xinjiang cotton has forced apparel companies to step up tracking technologies to map out routes for their products' origin, according to Brian Ehrig, partner in the consumer practice of management consulting firm Kearney. The ban is also accelerating the migration of apparel production in China to other regions like Vietnam and Cambodia.

Some experts believe that U.S. law has also compelled companies to block Xinjiang cotton products from other markets. Scott Nova, executive director of the Worker Rights Consortium, a labour rights monitoring organisation, said even if companies want to reroute Xinjiang-linked products to other markets, it would require a "substantial reorganisation" of their supply networks.

Figures from the China National Cotton Information Center show that sales of cotton produced in Xinjiang in the year to mid-June fell 40% from a year earlier to 3.1 million tons. The commercial
inventory of cotton produced in Xinjiang was 3.3 million tons at the end of May, up 60% from a year earlier, according to Wind, a Chinese financial information provider.    (AP)

More on this topic
Dolkun Isa: Does no-one have the guts to tackle China on the Uighurs?Chinaʹs oppression of the Uighurs: Save our Turkic brothers, Mr. President!Kristin Shi-Kupfer: "The aim is to rob the Uighurs of their identity"
Home
Print
Newsletter
MoreAll Topics

END_OF_DOCUMENT_TOKEN_TO_BE_REPLACED
Social media
and networks
Subscribe to our
newsletter