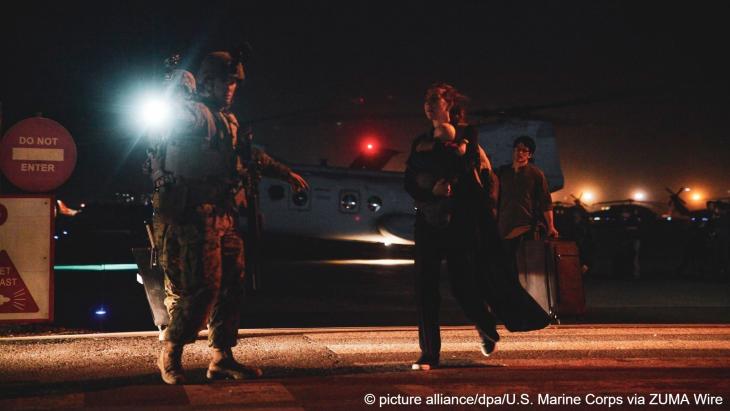 The UK's chaotic withdrawal from Afghanistan last year showed "systemic failures of leadership, planning and preparation", according to a scathing inquiry by MPs published on Tuesday.

The House of Commons Foreign Affairs Committee probe revealed a "fundamental lack of planning, grip or leadership at a time of national emergency" before and during the Taliban takeover of Kabul in August 2021.

"The manner of our withdrawal from Afghanistan was a disaster and a betrayal of our allies that will damage the UK's interests for years to come," the report said.

Already in August, the government faced a torrent of criticism over its hurried withdrawal following the decision of its ally the United States to end its 20-year presence.

Hundreds of Afghans eligible for relocation were left behind, many with their lives potentially at risk after details of staff and job applicants were left at the abandoned British embassy compound in Kabul.

At the time, Prime Minister Boris Johnson hailed a mission "unlike anything we have seen in our lifetimes" with the UK airlifting over 15,000 people in two weeks.

The foreign secretary at the time, Dominic Raab, was heavily criticised for not immediately leaving a beach holiday when the Taliban took control.

Committee MPs spoke with UK officials as well as Afghans who were evacuated, and received evidence from a "wide range of stakeholders".

During the run-up to the Taliban takeover, the government and civil servants suffered from an "optimism bias" that the U.S. would change its mind about withdrawing, despite it having been announced by President Donald Trump in February 2020, said the report.

"The UK government failed adequately to shape or respond to Washington's decision to withdraw, to predict the speed of the Taliban's takeover, or to plan and prepare for the evacuation of our Afghan partners," it added.

"Most damning for the Foreign Office is the total absence of a plan for evacuating Afghans who supported the UK mission, without being directly employed by the UK government, despite knowing 18 months before the collapse of Afghanistan that an evacuation might be necessary."

In responding to questions from the Committee, which started work on the report in September, the Foreign Office "provided answers that were intentionally evasive and often deliberately misleading".

Instead, two whistle-blowers provided crucial testimony to the committee.

"Those who lead the Foreign Office should be ashamed that civil servants of great integrity felt compelled to risk their careers to bring the situation to light", the report said.

The report highlighted the lack of a line of command within the government, and "untraceable and unaccountable political interventions".

Particularly controversial was the evacuation by a British ex-serviceman of around 150 dogs and cats from his Nowzad animal charity on a privately chartered plane, reportedly following Johnson's intervention.

"Senior officials believed that the prime minister played a greater role in some decisions than has been admitted," the report said.

The foreign office's top civil servant, Philip Barton, should now "consider his position", the report said, effectively calling on him to resign.

The committee chair, Conservative MP Tom Tugendhat, said "the UK's part in this tragedy exposes a lack of seriousness in achieving coordination, a lack of clear decision-making, a lack of leadership and a lack of accountability.

"At a time when we face critical foreign policy challenges, and the risks to our lives and economy are so serious, including from the current energy and inflation pressures, our diplomacy and security cannot be so confused and unstructured."

The committee called on the government to "commit to a serious strategy for future engagement with Afghanistan", warning that "attempts to isolate the new regime entirely may only hurt the Afghan people and leave a vacuum to be filled by China.

"Failure to do so would abandon women and girls in the single biggest reversal of rights in a generation," it said.

It called on the UK to re-establish a diplomatic presence "as soon as it is safe to do so, and to work with those on the ground who can support civil society".    (AFP)

END_OF_DOCUMENT_TOKEN_TO_BE_REPLACED
Social media
and networks
Subscribe to our
newsletter