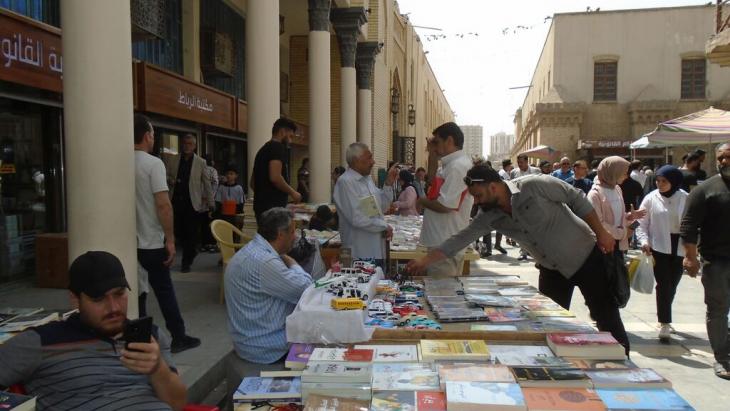 Iraq is in a quandary over Russia and Ukraine. Its attitude toward Kiev is ambivalent, yet it still hopes to emerge as one of the winners in this war. If Russia fails as an oil supplier, Iraq could step in. Birgit Svensson reports from Baghdad

Mohammed from Basra has made it. Six years ago, he left his hometown in southern Iraq and fled to Europe – via the Balkan route like thousands of Iraqis and Syrians at the time. The Islamic State (IS) terrorist militia was establishing its caliphate, while young men like Mohammed were enlisting in the Popular Mobilisation Forces, an alliance of militias to fight the jihadists.

His family wanted at least one male family member to be safe, scraped together $2,000, paid smugglers. Mohammed made his way to Greece, from there to Austria and finally to Poland. There he met and fell in love with his Polish wife.

Now they both live in Berlin, are in work and have a little daughter. "I have a good life," Mohammed says on the plane to Basra. He is excited because it is the first time since he fled that he will have seen his family. He wants to stay for a month, to spend Ramadan with them. His wife accepts this, happy to let him practice his religion. In Germany – and Poland even more so – everyone is currently focused on Ukraine anyway.

But he is not one of those refugees who think that Ukrainians have it better in the European Union than Syrians and Iraqis. They, too, were welcomed with open arms, at least in Germany, says the 28-year-old. Nevertheless, Mohammed has his reservations about Ukraine. His reasons run deep.

"When someone shoots at you, you don't forget it"

What the young man from Basra then says can also be heard elsewhere in Iraq: on Mutanabbi Street in Baghdad, where the Iraqi cultural scene always meets on Fridays, or in the shopping mall in the Mansour district, where families enjoy themselves after breaking their fast. "We empathise because they are going through what we went through."  Most feel deep compassion for the Ukrainians, whose fate is much like theirs: three wars, invasion, occupation, terror. The destruction of Iraq went on for over 30 years. So when images of the war in Ukraine flicker across Iraqi TV screens, most people just nod silently, absorbed. 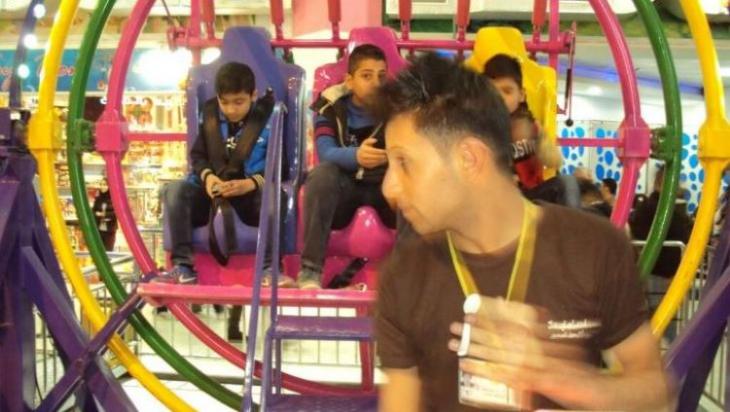 Iraq, a potential winner in this war: in March, Iraq produced almost 4.5 million barrels of crude oil a day again, with the trend continuing to rise. As a result of the Ukraine war, Baghdad raked in as much money last month as it last did before the 1973 oil crisis. Iraq is aiming to double its output by 2025. This additional revenue would more than compensate for higher food prices, caused by the loss of wheat and, above all, sunflower oil from Ukraine. The picture shows young people enjoying Ramadan in a shopping mall in Baghdad's Mansour district

But there is no real sympathy for the people there. Compassion yes, sympathy no. The Iraqis have not forgotten that Ukraine was part of the 2003 U.S.-led military alliance that inflicted severe suffering on their country. Without a UN mandate, troops under the command of the Americans and British invaded Iraq. Based on a lie, the reason for war was contrived. The weapons of mass destruction that Saddam Hussein was supposed to possess were never found. At the time, Kiev sent a rather large contingent of soldiers to Iraq – 1,650 troops were stationed in Wasit province, southeast of Baghdad. Quite a few in Iraq are now drawing parallels with the Russian invasion of Ukraine and Putin's lies. "When someone shoots at you, you don't forget it," they say.

Not even when, after the withdrawal of troops, Ukraine opened its gates to Iraqis, took in many students, generously granted visas and attracted so many Iraqi tourists who previously had only been allowed to vacation in Iran. Ukraine became a symbol of freedom for Iraqis. Men in particular raved about the beautiful blonde women there. And yet: an uneasy feeling towards Ukraine has remained.

Iraq – a winner in this war?

So far, Iraq's stance towards Vladimir Putin remains unclear; it abstained from the UN resolution that condemned Russia's attack on Ukraine by a large majority. This was tantamount to a vote of approval for the Kremlin's actions. But now we are seeing a shift. Effective immediately, posters of Putin or his war against Ukraine have been banned in Iraq. Previously, a banner reading "We support Russia" hung in the capital Baghdad.

Now, as Western government officials and presidents flicker across screens on a shopping spree with the sheikhs or emirs of the Gulf, striking one gas or oil deal after another, Iraq is not about to be left empty-handed and is looking to profit After all, the country is the second largest oil producer in the Middle East after Saudi Arabia. If Russia fails as an energy supplier, Iraq could step in. Its capacities are far from exhausted. 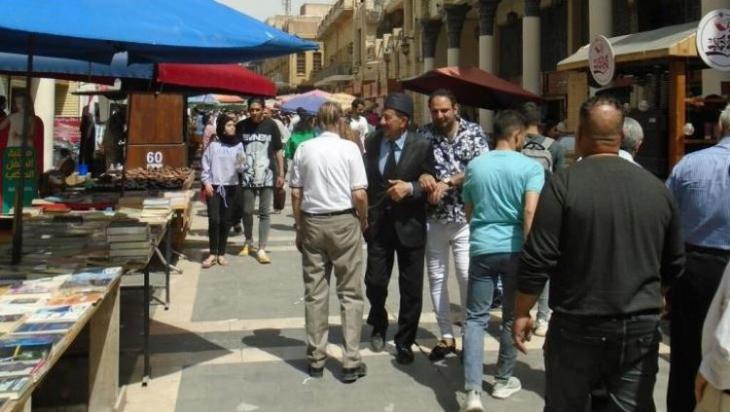 Cultural meeting place: people meet up on Baghdad's Mutanabbi Street on Fridays to exchange opinions. Birgit Svensson asked around to find out what people think about the war in Ukraine. "Most feel deep compassion for the Ukrainians, whose fate is much like theirs: three wars, invasion, occupation, terror," writes Svensson. "The destruction of Iraq went on for over 30 years. So when images of the war in Ukraine flicker across Iraqi TV screens, most people just nod silently, absorbed." Nevertheless, reservations remain. Ukraine was, after all, part of the 2003 U.S.-led military alliance "that inflicted severe suffering on their country. Without a UN mandate, troops under the command of the Americans and British invaded Iraq"

Although the Mesopotamian country was forced to cut production in the last two years due to OPEC quota restrictions and output slipped below four million barrels a day, volumes are now being increased again. The price of oil has skyrocketed and no longer needs any artificial influence.

In March, Iraq produced almost 4.5 million barrels a day again, with the trend continuing to rise. As a result of the Ukraine war, Baghdad raked in as much money last month as it last did before the 1973 oil crisis. Iraq is aiming to double its output by 2025. This additional revenue would more than compensate for higher food prices, being caused by the loss of wheat and, above all, sunflower oil from Ukraine. In other words, Iraq – along with the other oil- and gas-producing states – stands to emerge from this war a winner.

Yet so far, no additional supply contracts have been signed. Neither Austria, Germany, France nor Great Britain have sent their economic ministers to Baghdad to buy Iraqi oil or even gas, which though still produced on a small scale, is also increasing.

The reason has to do with economics: various Russian companies play a central role in the Iraqi energy sector. Lukoil operates in the second largest oil field in southern Iraq, West Qurna2, with a production capacity of 400,000 barrels per day. And Rosneft has an important controlling stake in the Kurdistan Pipeline Company (KPC), which pipes oil from both the Kurdish autonomous regions and Kirkuk to the Turkish port of Ceyhan. Some 500,000 barrels of Iraqi oil are shipped daily from there to destinations around the world.

Alarmed by the sanctions imposed by the EU and other Western countries, the governor of the Central Bank of Iraq, Mustafa Ghalib Mukhaif, recently sent a letter to the Iraqi government drawing attention to the consequences for Russian companies in Iraq. "In order to protect Iraq's financial system, we propose," reads the letter, which was published by the Iraq Oil Report, "postponing contracts or agreements at government level and delaying financial transactions within the framework of the Russian financial system."

Once again, this highlights the predicament Iraq is in over Russia and Ukraine.

Dalia Hatuqa is an experienced journalist who has reported on the Israeli-Palestinian conflict from Ramallah, Washington DC and Amman. A writer for Time Magazine, Foreign Affairs ... END_OF_DOCUMENT_TOKEN_TO_BE_REPLACED

Since President Abdul Fattah al-Sisi seized power in Egypt in 2013, he has ruled the country with an iron fist. Civil society, opposition and free press struggle to survive. Tens ... END_OF_DOCUMENT_TOKEN_TO_BE_REPLACED

Many Turks are dissatisfied with the international status of their country. At the same time, opinion polls reveal great scepticism among the Turkish population towards the USA. ... END_OF_DOCUMENT_TOKEN_TO_BE_REPLACED

The German government is planning to legalise cannabis before the end of this legislative period. So what does Islam have to say about its consumption? Will changing the law alter ... END_OF_DOCUMENT_TOKEN_TO_BE_REPLACED

In his latest book, Navid Kermani poses questions about God. It feels like no one could have done it better. His writing elicits smiles, doubt and wonder. By Melanie Christina Mohr END_OF_DOCUMENT_TOKEN_TO_BE_REPLACED
Author:
Birgit Svensson
Date:
Mail:
Send via mail

END_OF_DOCUMENT_TOKEN_TO_BE_REPLACED
Social media
and networks
Subscribe to our
newsletter