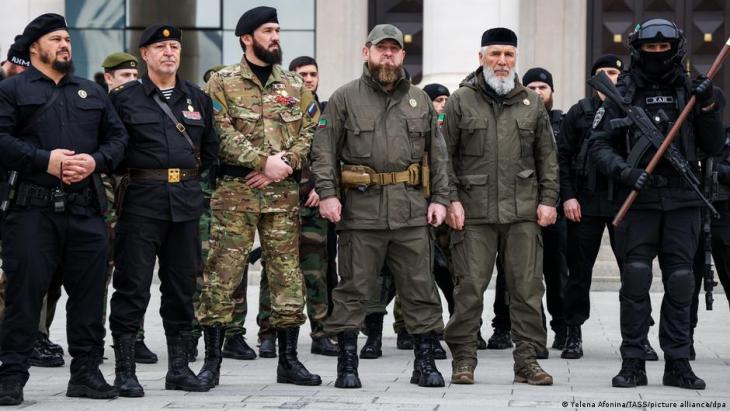 Chechen warlord and Putin ally Ramzan Kadyrov has boasted of his soldiers' part in Russia's war in Ukraine. But many Chechen and Tatar Muslims are defending Ukraine and settling scores with the rulers of their homelands. By Monir Ghaedi

The number of these fighters deployed to Ukraine is unknown, but their reputation for brutality and ruthlessness in enforcing domestic rule is well-known, and their presence has raised memories of grisly urban combat and guerrilla fighting from the Chechen wars in the 1990s and early 2000s.

Head of the Chechen Republic Ramzan Kadyrov, known as one of the most loyal allies of President Vladimir Putin, announced on his Telegram channels that his men would be fighting in the "hottest hot spots in Ukraine". However, some military analysts have cast doubt on whether his braggadocio on social media has accurately reflected his troops' performance on the battlefield.

Across the front lines, another group of Chechens has also joined the war – but they intend to defend Ukraine against the Russian invasion. "Dear Ukrainians, please do not see those people as Chechens," said Adam Osmayev, an exiled Chechen leader, in a video published on social media, referring to Kadyrov's soldiers. "They are traitors … puppets of Russia." "Real Chechens are standing with you, bleeding with you, as they have in the past eight years," he said, holding a gun and standing next to three other armed men with masked faces.

Osmayev leads the Dzhokhar Dudayev Battalion, named after the late Chechen rebel leader. The group is one of the two publicly known Chechen volunteer groups fighting against Russian-backed separatists and Russian forces in Ukraine since 2014. The other one is called the Sheikh Mansur Battalion and is headed by a commander called Muslim Cheberloevsky. 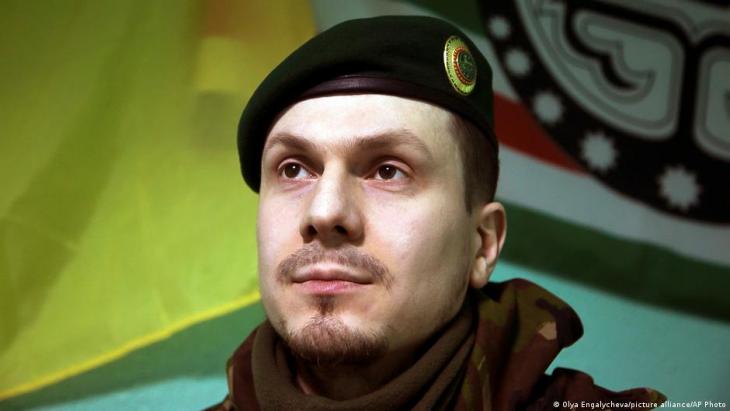 "Dear Ukrainians, please do not see those people as Chechens," said Adam Osmayev in a video published on social media, referring to Kadyrov's soldiers. He calls the soldiers of Chechnya's strongman Kadyrov "traitors" and "puppets of Russia"."Real Chechens are standing with you, bleeding with you, as they have in the past eight years"

Both the identity and the exact number of the Chechen volunteers is unknown. But most of them are believed to be people who left Chechnya either after the end of the war there in 2003, or who have escaped Kadyrov's despotic rule in recent years.

In 2013, the Ukrainian government, then a Moscow ally, imprisoned Osmayev for plotting to assassinate Putin – an accusation he denies. When he was released a year later, he went to the Donbas region to fight against the pro-Russian separatists. Both Russian and Western media have reported alleged links between the Sheikh Mansur Battalion and Islamic State.

When Putin's army began marching toward Kyiv, leaders of both battalions, along with thousands of other foreign volunteer fighters, announced they would continue to defend Ukraine against "their common enemy". Their determination to assist Ukraine amid the ongoing Russian invasion stems from similarities they see between what Ukrainians are going through and their own fate.

A long and violent history

Chechnya, now a Russian republic, is home to a majority-Muslim population and has a complicated and often violent history with Moscow.

After the collapse of the Soviet Union, Russia waged two devastating wars to keep Chechnya from becoming independent, a goal to which it had been aspiring since the collapse of the Soviet Union. The first conflict broke out in 1994 when Russia sent troops to the Chechen Republic to quash its attempt to break away. Fighting paused only two years later, in 1997, following the signing of a peace agreement in August 1996.

But in 1999, the Russian army returned after a series of deadly terror attacks organised by Chechen warlords on the territory of Russia. A new war erupted, lasting 10 years and culminating in the siege of Grozny by the Russian troops, resulting in enormous destruction and tens of thousands of civilian casualties.

The first two years of that war coincided with Putin's ascension to power. The active phase of the war was over in April 2000. Two months later, Putin appointed Akhmad Kadyrov as head of the Chechen Republic, who would rule until he was assassinated by Islamist rebels in 2004. His son Ramzan Kadyrov became Chechen leader in 2007 and has remained in office ever since. 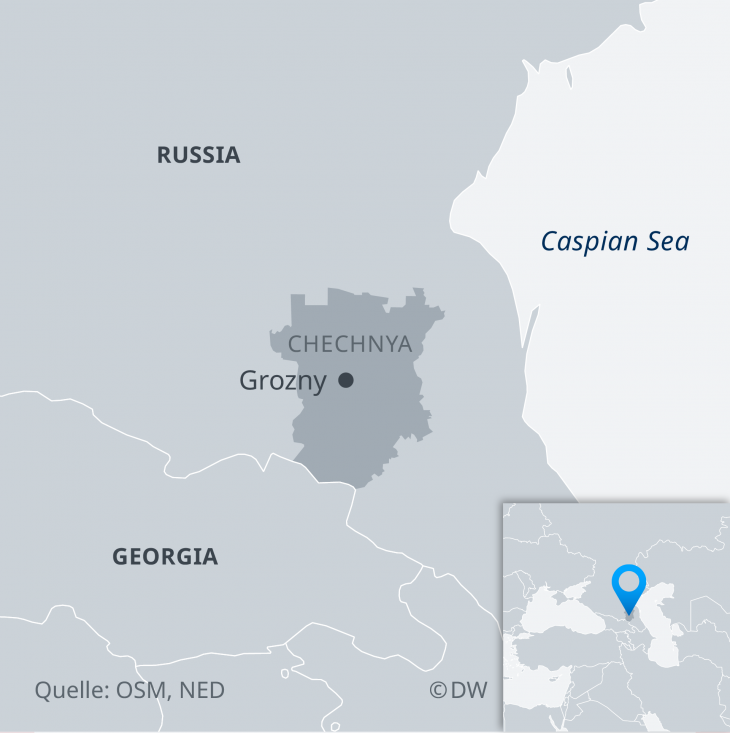 All but ignored in Europe: following the collapse of the Soviet Union, Chechnya aspired to independence, but Russia waged two devastating wars (1994-1996 and 1999-2009) to prevent it. For many Chechens, Putin deals with Ukraine today no differently than he did with them then. "Moscow's attempts today to impose its control over independent Ukraine resonates in the hearts and minds of many Chechens who remember their struggle for independence against the Russian colonising machine," says Albert Bininachvili, professor of politics at the University of Bologna. "Chechens consider the war in Ukraine as a continuation of the war in Chechnya," Marat Iliyasov, a researcher at Lithuania's Vytautas Magnus University, explains

Under Kadyrov's rule, human rights have deteriorated as critics, activists and journalists face clampdowns. He is suspected of having been involved in the killings of several critics outside Chechnya, including Zelimkhan Khangoshvili, a former military commander gunned down in Berlin in 2019. "It is safe to say that a great majority of the Chechen diaspora left their homeland after Kadyrov came to power, not during the war," says Marat Iliyasov, a researcher at Lithuania's Vytautas Magnus University.

For many exiled Chechens, Putin is treating Ukrainians the way he treated them. "Moscow's attempts today to impose its control over independent Ukraine resonates in the hearts and minds of many Chechens who remember their struggle for independence against the Russian colonising machine," explains Albert Bininachvili, a professor of political science at Bologna University.

Putin aspires to expand Russia's domination to the Soviet borders, he continued, but without the intention of bringing back the Soviet system, "which in effect leaves us with nothing but Russian colonialism."

"Chechens consider the war in Ukraine as a continuation of the war in Chechnya," Iliyasov adds. "So they want to contribute to eventual victory against this perceived evil – something not achieved on Chechen soil."

"That's alongside another motivation, which is a kind of moral obligation to help people who are in such situations, and showing solidarity with them," he concludes.

Cheberloevsky, the head of the Sheikh Mansur Battalion, also considers the latest fighting as part of a much longer conflict. He said in an interview with Radio Free Europe's Caucasus service, "We have been fighting in Ukraine since 2014 to beat our common enemy."

Akhmed Zakayev, the head of the Chechen separatist government in exile, encouraged all Chechens living abroad to fight alongside the Ukrainian government in a video shared on social media. 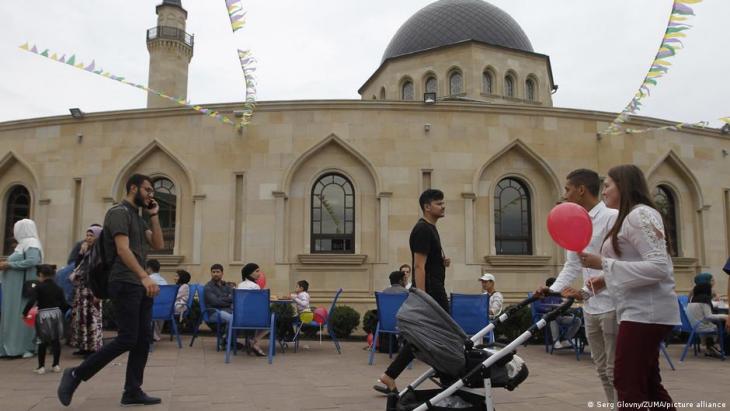 An image from happier times. Muslims in Ukraine celebrating the Islamic festival of sacrifice Eid al Adha. Today, Ukrainian Muslims support their country's struggle against the Russian invasion. Said Ismagilov, one of the spiritual leaders of the Muslim community in Ukraine, is of Tatar origin. He posted a picture of himself in military uniform next to members of the Ukrainian defence forces in Kiev. In another video, he called on Muslims worldwide to show solidarity with Ukraine. The Crimean Tatars, a Muslim ethnic minority on the Crimean peninsula annexed by Russia in 2014, have been resisting the occupation since Russia annexed Crimea in 2015

Chechens are not the only Muslim group assisting Ukrainians. Said Ismagilov, one of Ukraine's top Islamic leaders, who is of Tatar origin, posted a picture of himself in a military uniform beside the members of the Territorial Defence Forces in Kyiv. In another video, he called on the Muslims in the world to stand in solidarity with Ukraine.

The Crimean Tatars, a Muslim ethnic minority indigenous to Crimea, a Ukrainian peninsula annexed by Russia in 2014, have been resisting Russian occupation since 2015, with some of them fighting in the Ukrainian armed forces. In a video widely shared by Ukrainian media, Ayder Rustemov, the head of Crimea's Muslim community as recognised by Ukraine, urged Ukrainian Muslims to defend their country and called on Russian Muslims to denounce Russia's aggression.

Kadyrov, who adheres to Sufism, a moderate sect of Islam with deep historical roots in Chechnya, has tried to brand the battles in Ukraine as jihad, the Islamic term for holy war. "We have an order, we have jihad!" He wrote on his Telegram channel on 4 March.

Rights groups, including Human Rights Watch, have said Kadyrov’s paramilitary forces have a long record of terrorising, torturing and killing political dissidents claiming they were Islamic rebels. Kadyrov’s latest claims have particularly come under criticism not just from Muslim activists and leaders, but even from believers in the holy war, including jihadists in Syria and Iraq. "Russia has killed thousands of Muslims and is still killing them," wrote Maysara bin Ali, also known as Abu Maria al-Qahtani, a commander of the Islamist group Heyaat al Tahrir Sham, on Telegram. "Strengthening Russia in Ukraine means strengthening criminals."

Dalia Hatuqa is an experienced journalist who has reported on the Israeli-Palestinian conflict from Ramallah, Washington DC and Amman. A writer for Time Magazine, Foreign Affairs ... END_OF_DOCUMENT_TOKEN_TO_BE_REPLACED

Since President Abdul Fattah al-Sisi seized power in Egypt in 2013, he has ruled the country with an iron fist. Civil society, opposition and free press struggle to survive. Tens ... END_OF_DOCUMENT_TOKEN_TO_BE_REPLACED

Very different Western reactions to the suffering in Ukraine and the Arab world show that there is a profound rift among cultures. Essay by Michael Young END_OF_DOCUMENT_TOKEN_TO_BE_REPLACED

Many Turks are dissatisfied with the international status of their country. At the same time, opinion polls reveal great scepticism among the Turkish population towards the USA. ... END_OF_DOCUMENT_TOKEN_TO_BE_REPLACED

Since Spain abandoned its traditional neutrality towards the conflict in Western Sahara, Morocco has announced a "new phase" in relations between the two countries. But what is ... END_OF_DOCUMENT_TOKEN_TO_BE_REPLACED

Tunisia's president has been carrying out a coup by degrees, demolishing the country's hard-fought democratic gains bit by bit. With an economy in turmoil and a splintered ... END_OF_DOCUMENT_TOKEN_TO_BE_REPLACED
Author:
Monir Ghaedi
Date:
Mail:
Send via mail

END_OF_DOCUMENT_TOKEN_TO_BE_REPLACED
Social media
and networks
Subscribe to our
newsletter