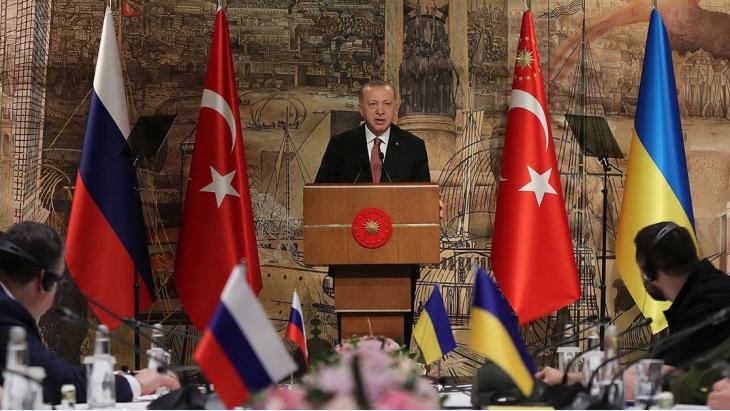 Turkey has played a major role in the search for an end to the Ukraine war as the host for this week’s talks between Moscow and Kyiv – the product of an ambivalent stance experts say is largely rooted in the troubled Turkish economy’s deep links to both countries.

Weeks before Russia and Ukraine agreed on Istanbul as the site for the March 28-30 peace talks, President Recep Tayyip Erdogan made Turkey’s equivocal position clear, saying “we cannot give up” on either nation the day before Russia invaded.

Ankara has stayed true to this approach. The Turkish foreign ministry called the invasion “unacceptable” and a “grave violation of international law” when it began on February 24. Four days later Turkey followed Ukraine’s request to recognise the conflict as a war, allowing it to close the Bosphorus and Dardanelles straits to most warships under the 1936 Montreux Convention.

However, Turkey also opposes the Western sanctions imposed on Russia – with Foreign Minister Mevlut Cavusoglu emphasising that Russian oligarchs are “of course” welcome in Turkey and free to do business there in accordance with international law.

These statements exemplify Turkey’s distinct position on the conflict – “pro-Ukrainian” but “not outright anti-Russian”, as summarised by Ozgur Unluhisarcikli, director of the German Marshall Fund’s Ankara bureau, in interview.

Home
Print
Newsletter
More on this topic
Arms to Ukraine: How useful are Turkish-made drones fighting in Ukraine?Ukraine conflict: Turkey and Israel eye co-operation in Central AsiaRussia's interventions in Ukraine and Syria: What drives Putin is evident from Syria
Related Topics
All Topics
Date:
Mail:
Send via mail

END_OF_DOCUMENT_TOKEN_TO_BE_REPLACED
Social media
and networks
Subscribe to our
newsletter