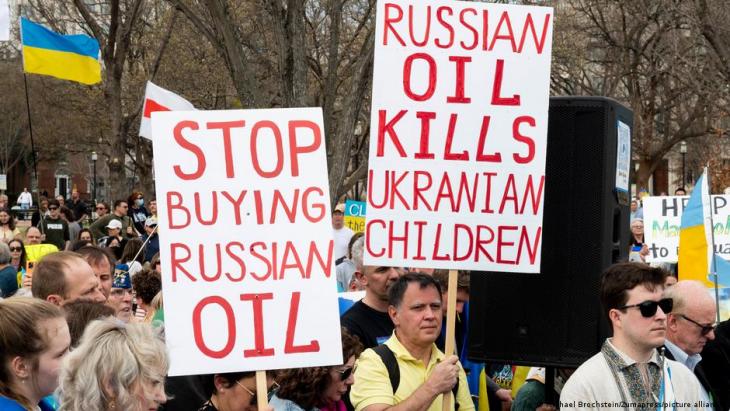 Ukraine conflict
Will Arab oil save the world from soaring prices?

Sanctions on Russia won't work unless the world reduces its use of Russian oil and gas. But it's difficult to do this without also increasing prices. Middle Eastern oil producers could help. But do they want to? Cathrin Schaer reports

As the Russian invasion of Ukraine intensifies, calls have been growing to boycott Russian oil. In an appeal released last week, 465 organisations in 50 countries asked their governments to stop using Russian energy.

"The world's fossil fuel addiction is funding Putin's warmongering," said the statement, which was signed by organisations like Greenpeace, Extinction Rebellion and Fridays for Future, among many others.

In an oil market analysis published by The Oxford Institute for Energy Studies at the beginning of March, Russia is ranked as the second-biggest producer of crude oil in the world, pumping around 14% of the world's total output in 2021. About 60% of Russian crude exports go to Europe, with another 35% heading to Asia. Experts say Europe alone is paying Russia around €350 million a day for it.

As the letter writers and others, including Ukrainian Foreign Minister Dmytro Kuleba on Twitter, have pointed out, if the world keeps using Russian oil and gas, this negates the international sanctions and boycotts that are supposed to persuade Russia to withdraw from Ukraine.

I am told that Shell discretely bought some Russian oil yesterday. One question to @Shell: doesn’t Russian oil smell Ukrainian blood for you? I call on all conscious people around the globe to demand multinational companies to cut all business ties with Russia.

[Editor's note: on 8 March, Shell announced its intent to withdraw from its involvement in all Russian hydrocarbons, including crude oil, petroleum products, gas and liquefied natural gas (LNG) in a phased manner]

The importance of Russian oil is part of the reason why it has not been sanctioned. Even if governments would want to ban Russian oil, they would be hard-pressed to replace it and, most importantly, would find it difficult to avoid causing oil prices to skyrocket.

Even before the Russian invasion of Ukraine, oil prices were high. As the world is recovering from the COVID-19 pandemic, higher-than-expected demand met sluggish supply from producers.

Due to the war in Ukraine and fears of further market disruption, oil prices are now rising even higher.

(Let’s ignore for a second whether this is a good political weapon—as in, do you think Putin will pull rethink the war if Europe stops buying Russian gas? I doubt it).

According to the Oxford Institute's report, analysts expect an average oil price of around $116 a barrel this year.

Higher prices obviously benefit Russia and are also negatively impacting Western economies. So the search for substitutes for Russian oil, as well as ways to counteract energy price rises, has become even more urgent.

Output up, prices down

Part of the answer could lie with the world's largest producer of crude oil, Saudi Arabia. Saudi Arabia and neighbouring United Arab Emirates (UAE) are thought to be the only two major oil producers who could ramp up spare production comparatively easily.

It would still be difficult for their oil to quickly replace supply coming out of Russia, said Karen Young, founding director of the Program on Economics and Energy at the Middle East Institute, based in Washington. "Increasing production does not mean increasing exports directly to Europe," she explained. "Oil markets are not that easily redirected."

Young said the biggest difference the Saudis could make is producing more oil to bring prices on the global market down. In mid-February, even before the Russian invasion began, the U.S. government already asked the Saudis and UAE to pump more oil to ease prices. 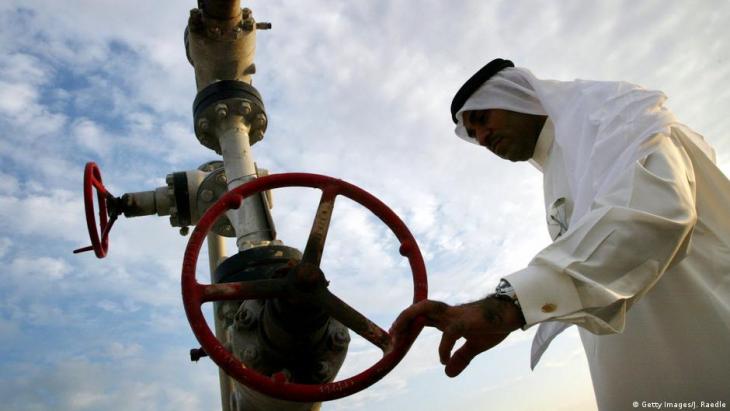 Middle Eastern oil producers, notably Saudi Arabia and the UAE, are resisting global pressure to boost oil and gas output: "OPEC has had a long-standing policy of not changing production or supply on the basis of geopolitical events," confirmed Hasan Alhasan, a research fellow on Middle East policy for the International Institute for Strategic Studies in London. "They only change in response to changes in market fundamentals"

At the most recent meeting of OPEC+ – the Organisation of the Petroleum Exporting Countries plus allies led by Russia – members agreed not to deviate from their output plan made earlier this year. The group wants to only slowly increase output in 2022 after the COVID pandemic led to a historic fall in demand.

During a meeting on 2 March that lasted only 13 minutes, the 23 OPEC+ members simply said they would increase output by an agreed 400,000 barrels per day in April; the war in Ukraine was not even mentioned in their final document.

Not turning to Russia

"OPEC has had a long-standing policy of not changing production or supply on the basis of geopolitical events," confirmed Hasan Alhasan, a research fellow on Middle East policy for the International Institute for Strategic Studies in London. "They only change in response to changes in market fundamentals."

With an embargo of Russian oil in the works, this is a moment when Saudi Arabia will have to choose which side it is on. It is the only oil producer with significant spare capacity (1-2mbd). 1/2

Alhasan suggested that more U.S. pressure might help. After all, the United States is a traditional security partner for the Gulf nations and they are not pivoting toward Russia. But right now, Alhasan cautioned, this is technically a conflict between third parties.

The Saudi's perception of the conflict could change, though, if the war continues to worsen and other countries – or even NATO – gets involved, or if a total ban on Russian oil is introduced.

The lack of sanctions on Russian energy exports undermines Europe's argument, Alhasan said. Without those sanctions, "it makes it difficult to make a case for why the Gulf states should stick their necks out," he admitted.

"I think a warmer reception and a direct request from President Biden to [Saudi Crown Prince] Mohammed bin Salman could also go a long way to encourage more Saudi production," said Young of the Middle East Institute. But the U.S. president has yet to speak directly with the Saudi leader.

The global pushback against Russia's war on Ukraine, including so-called self-sanctioning strategies, may also have an impact on Saudi Arabia's willingness to change output policy. Port workers all around the world have refused to unload Russian oil, while financiers, spooked by sanctions, are refusing to provide credit or payment methods for Russian oil deals.

Oil Products Tanker MONTEGO departed Russia carrying fossil fuels on Mar 08, 2022 has a new destination. Now scheduled to arrive in Denmark on Mar 11, 2022 Track them with the #RussianTankerTracker:https://t.co/jQQv2Tk7wP pic.twitter.com/nH9ZfTEmDH

Some market analysts also argue relationships in the Middle East should have been more carefully nurtured by the U.S. and European Union, especially now that Russia's war has made oil producers in the region important again.

"Even if Western diplomacy succeeds in bringing these countries on board, their [the Middle Eastern countries] worry is that this will be only temporary," Cinzia Bianco, an expert on the Gulf region at the Berlin office of the European Council on Foreign Relations, revealed.

Dina Esfandiary, an adviser to the Middle East and North Africa programme at the International Crisis Group think tank, believes the importance of Arab oil-producing countries waxes and wanes. In the long term, she said, "I think there has also been a realisation among these energy producers that they are not as important now as when the world was highly dependent on them."

This is why any pressure on Middle Eastern oil producers needs to be carefully considered, said Alhasan. If there's too much coercion, he argued, it will only validate their concerns "and, in the medium term, accelerate their efforts to expand their circle of international allies."

Since Ali Khamenei, Iran's most powerful man, has openly and unconditionally come out in support of Putin's war in Ukraine, logistical help is on its way, with an allegedly ... END_OF_DOCUMENT_TOKEN_TO_BE_REPLACED

Tourists have been returning to Tunisia, Egypt and Morocco. But, given the global uncertainty caused by the Ukraine war, will the comeback be enough to save a struggling sector, ... END_OF_DOCUMENT_TOKEN_TO_BE_REPLACED

The highly controversial Indian blockbuster "The Kashmir Files“, on the exodus of Kashmiri Hindus in the 1990s, is characterised by unilateral representations, negative ... END_OF_DOCUMENT_TOKEN_TO_BE_REPLACED

"Flugt" is the world's first museum dedicated to the stories of those forced to flee. The new museum, which focuses on the fates of refugees then and now, is housed in a former ... END_OF_DOCUMENT_TOKEN_TO_BE_REPLACED
Author:
Cathrin Schaer
Date:
Mail:
Send via mail

END_OF_DOCUMENT_TOKEN_TO_BE_REPLACED
Social media
and networks
Subscribe to our
newsletter