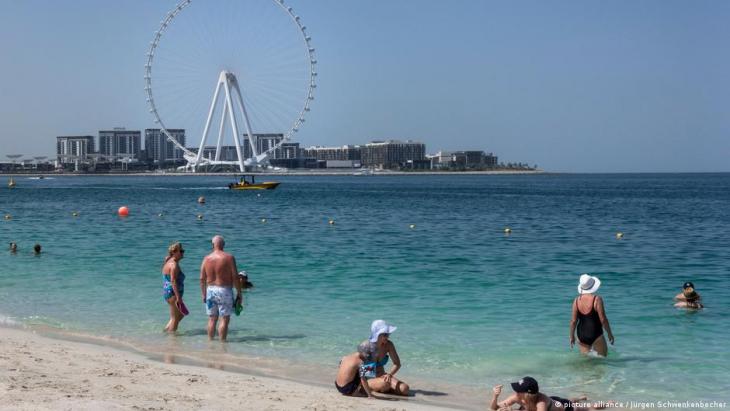 It's sunny and politically stable, there is little financial transparency and it's easy enough to invest in a business or property and get a residency visa in return, writes Cathrin Schaer

On its website, the Dubai-based lifestyle magazine Russian Emirates offers readers a selection of commonly asked questions. They include everyday queries about where to find Russian food in the United Arab Emirates, and whether there are Russian-speaking doctors there. But by far the most popular question on the Russian-language magazine is this one, with over 83,000 views: "Can I get UAE citizenship?"

In recent weeks – that is, since Russia invaded Ukraine and Western nations imposed sanctions as a result – the readership of the Russian Emirates website has almost doubled to nearly 300,000 views in a week. That trend is likely to continue, experts say, as Russians look for ways to avoid sanctions and secure their wealth. Some are likely also trying to escape what they see as an increasingly perilous political situation at home.

One oil industry insider, who visited the emirate of Dubai at the beginning of March, reported a palpable change in atmosphere there. "There's the feeling that this is an incredible game-changer, in terms of the influx of capital to Dubai as a result of Russians exiting [their country] and looking for safe havens financially," the insider said.

Elsewhere, there have been reports of Russian oligarchs' private jets flying back and forth from Moscow to Dubai. A Ukrainian newspaper reported local intelligence agency suspicions that the oligarchs were ferrying private property to Dubai for safety. Open source investigators, using maritime traffic websites, also spotted several superyachts moored in Dubai. Because the UAE hasn't imposed the same tough sanctions on Russia, the superyachts are safe there.

“Having a Russian passport or Russian money now is very toxic — no one wants to accept you, except places like Dubai,” said a Russian businessman who took refuge there” #UAE #Dubai #corruption #Russia #oligarchs https://t.co/3aODJDrzds

Dubai – now an even greater hub for Russian oligarchs' money

Despite its long-term security relationship with the United States, the UAE has attempted to avoid taking sides in the Russia-Ukraine war and has not imposed sanctions. As a result, Russian-speaking business consultants in Dubai have told international media there is a huge increase from inside Russia in requests for information.

"There is increasing concern that Dubai will indeed become an even greater hub for Russian oligarchs' money," Jodi Vittori, a professor at Georgetown University in Washington and expert on corruption, illicit finance and state fragility, confirmed. The flow of ill-gotten Russian gains has actually been washing through Dubai since the late 1990s, Vittori, who was previously assigned to NATO's counter-corruption task force, added.

But it's going to be hard for anybody to tell how much of an increase there might be now. "Because most of it won't be visible," Vittori explained. When it comes to working out who owns what in the UAE, corruption investigators have mostly had to rely on leaked documents, she continued. This is because the UAE authorities don't actually collect the relevant information, Maira Martini, a researcher with Transparency International, pointed out.

Thanks to increased scrutiny by organisations like the Financial Action Task Force, or FATF, a global money-laundering watchdog, there have been some recent rule changes, Martini said. At the beginning of March 2022, after a year of observation, the watchdog put the UAE on a so-called "grey list", which means "a jurisdiction under increased monitoring". 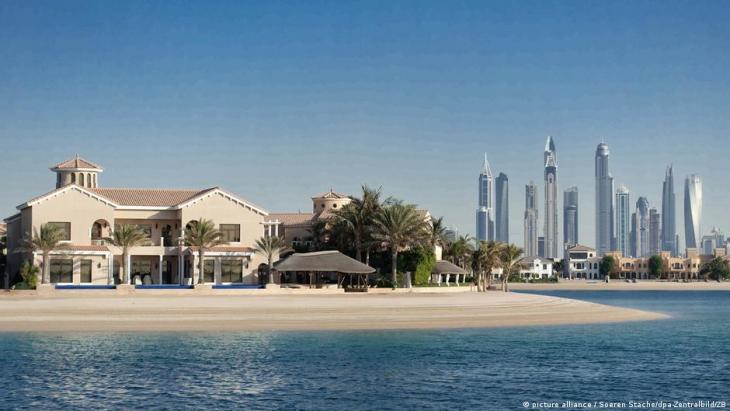 The ease of relocation: buying property in the UAE is comparatively frictionless and offers investors a residency visa, without needing local sponsorship. Paperwork to buy an apartment or start a business is minimal and cash is king, investigators have found. Investing in real estate worth around $272,000 (€185,000) gets the buyer a three-year UAE visa. Investing about $1.36 million (€1.18 million) buys a five-year visa. Moreover as Jodi Vittori, fomerly a member of NATO's counter-corruption taskforce, explains, "It's the combination of clean and dirty that makes Dubai so attractive"

The UAE has come up with a number of new rules to better control potentially illicit financing, though Martini and Vittori agreed they haven't actually done much about enforcing those rules. "Now if you start a company in the UAE, you are finally going to be asked who is really behind it," said Martini.

Despite more rules about company ownership, it would still be easy to hide wealth in the UAE, Martini continued. For example, the UAE has 39 different company registries across its seven emirates. "How can that be an effective system?" Martini argued. "It's a mess." There are also more than 40 of what are known as "free zones" in the UAE, mostly in Dubai, where foreigners can locate (or relocate) companies. "And with real estate or investment funds, nobody is going to ask you any questions," she added.

Buying property in the UAE is comparatively frictionless and offers investors a residency visa, without needing local sponsorship. Paperwork to buy an apartment or start a business is minimal and cash is king, investigators have found. Investing in real estate worth around $272,000 (€185,000) gets the buyer a three-year UAE visa. Investing about $1.36 million (€1.18 million) buys a five-year visa.

Ordinary, upper middle-class Russians, looking to avoid their business being appropriated by their own government or the economic meltdown back home, might well have the funds to set up a safe haven here too. The Organized Crime and Corruption Reporting Project, a global network of investigative reporters, runs a database that includes foreign property Russian politicians have declared under Russian law. In the UAE, only 62 properties – including garages, apartments and residential buildings – are registered.

Why are Russians so keen on the UAE?

Of course, the UAE is not the only place where wealthy individuals fleeing sanctions could hide money. There are 23 countries on FATF's grey list, including Pakistan, South Sudan, the Cayman Islands, Yemen and Morocco, among others. But some of these nations are now supporting efforts to cut off Russia economically and, besides, there are other reasons why UAE remains attractive.

"It's a unique location," Vittori explained. "It's not a transit point like the Cayman Islands, it's more of a one-stop shop for illicit finance." Dubai also has a lot of what Vittori calls "clean money". Many multi-national businesses operating in the Middle East base themselves here and operate legally. 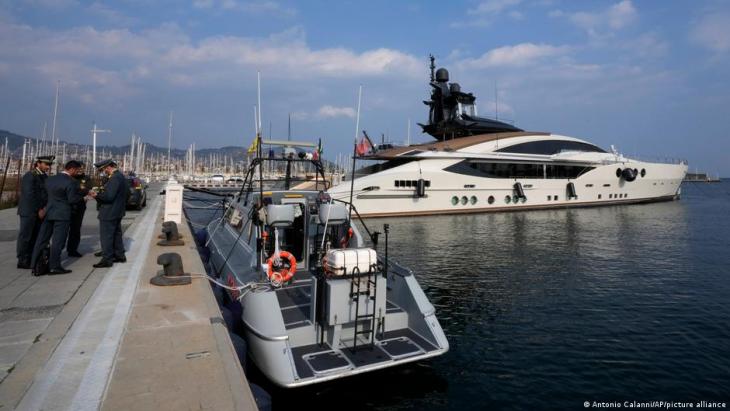 The UAE is not the only place where wealthy individuals fleeing sanctions could hide money. There are 23 countries on FATF's grey list, including Pakistan, South Sudan, the Cayman Islands, Yemen and Morocco, but it is arguably the best. The UAE has 39 different company registries across its seven emirates. "How can that be an effective system?" exclaims Maira Martini from Transparency International. "It's a mess." There are also more than 40 of what are known as 'free zones' in the UAE, mostly in Dubai, where foreigners can locate (or relocate) companies. "And with real estate or investment funds, nobody is going to ask you any questions"

"Nobody invests in 'dirty money' locations, because everybody knows it's dirty there. It's too obvious," Vittori explained. "It's the combination of clean and dirty that makes Dubai so attractive."

Dubai has also long been a popular visa-free holiday destination for Russians, attracting around 730,000 Russian tourists in 2019, before the pandemic curtailed travel. Around 100,000 Russian-speakers are thought to be living in the UAE currently, with about 40,000 from Russia and the rest from post-Soviet states.

The political situation is also advantageous. Each of the UAE's emirates is run by a monarchy, based on tribal authority. Human rights activists describe the emirates as authoritarian, with no real political opposition, where civil society, freedom of speech and the free press are muzzled.

This means less scrutiny from journalists or activists, Vittori said, while at the same time there is comparative political stability. "They might not care about stability at home, but when it comes to where they keep their money, the kleptocrats and the corrupt care about law and order," Transparency International's Martini added.

She believes there are two other main reasons why the UAE is a great hiding place for ill-gotten gains. Firstly, the secrecy around financial transactions and then secondly, the fact that the UAE "doesn't cooperate too much with other countries on these issues," she said.

The FATF reported that Dubai received about 300 requests for assistance from abroad between 2013 and 2018, but only acted on 89 of them. "[UAE authorities] are very slow and they're definitely not proactive," Martini concluded. "If, for example, an individual physically moves there, it would be very unlikely they would be extradited. All of these qualities make it very, very attractive to those wanting to avoid sanctions or hide wealth."

Just as the Islamic Revolution fundamentally changed Iran 43 years ago and had an impact far beyond the country's borders, the current wave of protests sweeping the country is set ... END_OF_DOCUMENT_TOKEN_TO_BE_REPLACED

Unflattering terms were used at a German Football Association human rights congress aimed at "intensifying the discussion" ahead of the World Cup. One speaker in particular made ... END_OF_DOCUMENT_TOKEN_TO_BE_REPLACED

While the ongoing legal dispute between Qatar Airways and European aircraft manufacturer Airbus has sent shockwaves across the entire global aviation sector, it may also threaten ... END_OF_DOCUMENT_TOKEN_TO_BE_REPLACED

Like Christianity, Europe's history is one of migration. Both have strong roots in the Orient and in cultures thousands of years old. Cultural historian Bernhard Braun invites us ... END_OF_DOCUMENT_TOKEN_TO_BE_REPLACED
Author:
Cathrin Schaer
Date:
Mail:
Send via mail

END_OF_DOCUMENT_TOKEN_TO_BE_REPLACED
Social media
and networks
Subscribe to our
newsletter