An exhibition in the Parisian Institut du Monde Arabe is dedicated to the life and work of renowned Egyptian singer Umm Kulthum, whose repertoire is still popular with stars such as Franco-Moroccan Sapho and up-and-coming singers such as Lebanese Nancy Agram. Mona Sarkis reports

The Voice of Egypt: like few other singers, Umm Kulthum embodied the principle of "al Tarab", the emotional rapture of musician and audience

​​On four intersecting paths the Institut du Monde Arabe wants to offer viewers an up-close look at the "Fourth Pyramid", as Umm Kulthum is called in her native country on the Nile. The first section presents the roots and career of the Egyptian diva. Documents, objects, photographs, video and recording sequences take viewers back to the era of the British mandate, the rule of Kings Fuad and Faruq, the revolution of 1952, and Presidents Gamal Abdel Nasser and Anwar Sadar, and naturally to the period of the epochal defeat of 1948.

Umm Kulthum, born in 1904 as the child of farmers in the impoverished Nile delta, dressed as a boy for her first performance. In the 1940s and 1950s she had already reached the height of her fame.

As a devout adherent to pan-Arabism she supported the war against Israel. And when her admirer and mentor Nasser led the Arabs into the trauma of 1967, she demonstratively and majestically launched a concert tour that visited nearly every Arab country. In the same year she declared in Paris, where she gave her first and only concert in a non-Arab city: "We would rather die than surrender. There is no ceasefire in the battle." 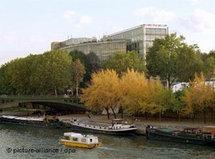 The Institut du Monde Arabe was founded in 1980. Its main purpose is to foster the dialogue between France and the Arab world, and to put on display the Arab world's cultural and spiritual values

​​But Umm Kulthum was not only a fervent nationalist. She was also known for her passion, the almost unending love cry in "El-Atlal" (The Ruins), probably the most famous song in her repertoire, written by Ibrahim Naji for Riad al-Sunbati's composition. In "El-Atlal" song and passion merge, underscoring what Umm Kulthum stands for musically: "Al-Tarab".

Exhibition viewers can also immerse themselves in her music. Concert excerpts enable the viewer to experience the singer, savour every intonation, at times with hours of her improvisations in direct emotional interaction with the audience. This second section, "The Talent", also includes interviews with music experts as well as the stage costumes of Umm Kulthum.

"Unveil yourselves, my sisters"

Section three is devoted to the music icon's public engagement. Before her spectacular rise to fame Umm Kulthum often performed in front of a primitive public, as she later recounted: " [In the beginning] we were often threatened by drunks, and the public requested vulgar songs such as 'Let's pull the curtains shut so that neighbours wont' see us'". 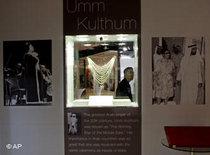 Umm Kulthum was courted even by the ruling class - this chain of pearls was presented to her as a gift by Sheikh Zayed bin Sultan Al Nahyan, president of United Arab Emirates from 1971-2004

​​Later her Muslim brothers suspected her of blasphemy for her "taiwid", the musical Koran recitations she pushed to perfection. But such accusations did not bother the daughter of an Imam, who sought to calm her nerves before performances with lectures from the Koran – at least externally. Nor did rumours about her strictly guarded private life and the insinuation that she married late only to seek refuge behind an honourable façade.

During her last concert abroad in Libya she called out to her backstage women assistants: "Unveil yourselves, my sisters. We are the productive power of our societies. We can carry our heads high and bare!"

The fourth exhibition section demonstrates that Umm Kulthum's legacy is still alive: 25 artists from Saudi Arabia to Pakistan, from the Czech Republic to Italy, from the Sudan to the Netherlands, encircle the "Egyptian nightingale" with their works: whether in Huda Lufti's representation of Umm as a statue of liberty; whether with a playful wink, as with Sarah Baydoun's und Sarah Nahhouli's purses that portray the diva in pop art manner with trendy chignon, glasses, and pearl necklace.

Interview with Rafael Alcántara
Cairo's Music Scene between Censorship and Awakening
Last fall, the Munich saxophonist and singer Rafael Alcántara was invited to Cairo by the Institute for Foreign Cultural Relations. In this interview with Stefan Franzen, he talks about his impressions of Cairo's music scene and the influence of the state

www
Further information on the exhibition (in French)

END_OF_DOCUMENT_TOKEN_TO_BE_REPLACED
Social media
and networks
Subscribe to our
newsletter