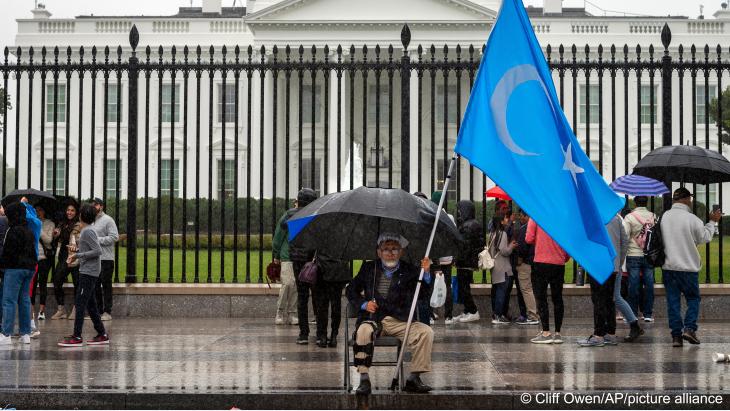 In a close diplomatic victory for China, the U.N.'s top human rights body on Thursday voted down a proposal from Britain, Turkey, the United States and other mostly Western countries to hold a debate on alleged rights abuses against Muslim Uighurs and other ethnic minorities in China's western Xinjiang region.

At the 47-member state Human Rights Council, 17 countries voted in favour, 19 were against, and 11 abstained in a vote to hold a debate on Xinjiang at its next session in March. The vote amounted to a test of political and diplomatic clout between the West and Beijing, and would have marked the first time that China's record on human rights would merit a specific agenda item at the council.

The result, prompting a smattering of applause in the chamber, followed days of diplomatic arm-twisting in Geneva and in many national capitals as leading Western countries tried to build momentum on a report from former U.N. human rights chief Michelle Bachelet's office, released 31 August, which found that possible "crimes against humanity" had occurred in Xinjiang.

A simple majority of voting countries was required.

China locked down "no" votes among its usual allies, plus many African countries and Persian Gulf states Qatar and the United Arab Emirates. Somalia was the only African country, and only member state of the Organisation of Islamic Cooperation, to vote "yes". Turkey is in the OIC, but doesn't have a council seat right now. Argentina, Brazil, India, Malaysia, Mexico and Ukraine were among countries that abstained.

"This is a missed opportunity by council members to hold China to the same standard as other countries," Dolkun Isa, president of the World Uighur Congress, said in a statement. "The international community cannot fail the victims of the Uighur genocide."

The U.N. rights office's report stopped short of referring to abuses against Uighurs as genocide, but some Western countries have. The make-up of the council rotates among U.N. member states each year, and China – a powerful country with a permanent seat on the Security Council – has never been the subject of a country-specific resolution at the council since it was founded more than 16 years ago.

The proposal was just to hold a debate, with no consistent monitoring of the rights situation, and amounted to just about the least intrusive form of scrutiny that the council could seek. The call stopped short of creating a team of investigators to look into possible crimes in Xinjiang, or appointing a special rapporteur – a tacit acknowledgement by the Western countries that going after increasingly influential China would be a tall order.

After the vote, China's Foreign Ministry issued a lengthy statement saying that "for some time now, the U.S. and some other Western countries have been misinforming the public about Xinjiang and seeking political manipulation in the name of human rights simply to smear China's image and contain China's development."

"The issues that the Human Rights Council truly needs to focus on are the serious human rights violations concerning the U.S., the UK and some Western forces, including systemic racism and racial discrimination, the rights of refugees and migrants, rampant gun violence, unilateral coercive measures, and massive killings of innocent civilians in overseas military operations," said the statement, dated Friday but unsigned.

China says it never gave its support to Bachelet's report, and warned of a bad precedent. Michele Taylor, the U.S. ambassador, said the request for the debate aimed simply to "provide neutral forum for discussion".

"No country represented here today has a perfect human rights record,"she said. "No country, no matter how powerful, should be excluded from council discussions. This includes my country – the United States – and it includes the People's Republic of China."

Human rights groups have accused China of sweeping a million or more people from minority groups into detention camps where many have said they were tortured, sexually assaulted, and forced to abandon their language and religion. The camps were part of what the rights groups have called a ruthless campaign against extremism in Xinjiang that included draconian birth control policies and restrictions on people's movement.

Some leading human rights advocacy groups expressed disappointment, but vowed to keep working for victims of abuses against Uighurs and others in Xinjiang.

"Today's vote protects the perpetrators of human rights violations rather than the victims – a dismaying result that puts the U.N.'s main human rights body in the farcical position of ignoring the findings of the U.N.'s own human rights office," said Amnesty International Secretary-General Agnes Callamard. "Thirty member states' silence – or worse, blocking of debate – in the face of the atrocities committed by the Chinese government further sullies the reputation of the Human Rights Council," she added.

China called the prison-like camps, complete with barbed wire and guard towers, centres for job training and de-radicalisation. It says they have since been closed, although monitoring groups say many formal inmates have merely been shifted to ordinary prisons to serve lengthy sentences.

On Friday, as part of dozens of proposals before the council, member states are also to consider a proposal from 26 European Union countries to appoint a "special rapporteur" on Russia, citing a string of concerns about mass arrests and detentions; harassment of journalists, opposition politicians, activists and rights defenders; and crackdowns – at times violent – on protesters against President Vladimir Putin's war in Ukraine.    (AP)

More on this topic
Dolkun Isa: "Does no-one have the guts to tackle China on the Uighurs?"China in the Middle East: Beijing's new charm offensiveChinaʹs oppression of the Uighurs: Save our Turkic brothers, Mr. President!
Home
Print
Newsletter
MoreAll Topics

END_OF_DOCUMENT_TOKEN_TO_BE_REPLACED
Social media
and networks
Subscribe to our
newsletter