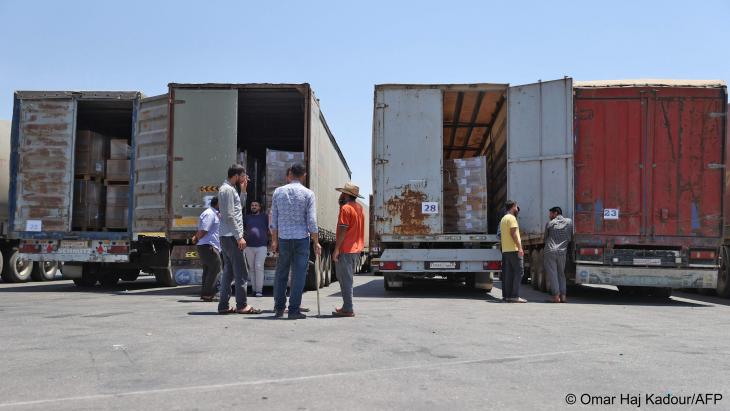 A U.N. Security Council mandate for U.N. aid deliveries to some 4 million people in Syria from Turkey expired on Sunday as diplomats struggled to find a deal with Russia, which traded barbs with the United States over the renewal of the operation.

Ireland and Norway are still working to reach a compromise, diplomats said, but a vote on Sunday was unlikely so the huge U.N. aid operation would be shut down. In 2020 the mandate ran out, but was renewed a day later on the council's fifth attempt.

U.N. aid chief Martin Griffiths told Canada's CBC television on Sunday that the operation, which delivers aid including food, medicine and shelter, was a lifeline and that if it cannot continue "people will die".

Russia vetoed a one-year extension on Friday and then failed in its own push for a six-month renewal, which would have required the 15-member body to adopt a new resolution in January to extend it for another six months.

The United States, Britain and France have said a six-month extension is not long enough for aid groups to plan and operate effectively.

U.S. Ambassador to the United Nations, Linda Thomas-Greenfield, spoke to aid groups on Sunday, who told her that "without the U.N. operation 70% of food needs would go unmet".

"An entire generation is at risk," she posted on Twitter. "The NGOs (aid groups) asked the UNSC to continue fighting to save these lives ... We have been working all weekend with the UNSC to find compromise."

Russia's Deputy U.N. Ambassador Dmitry Polyanskiy replied on Twitter: "There's no need to fight and you know it perfectly well!" He said Russia was not trying to kill the U.N. operation and just wanted to make it more efficient and transparent.

After the two council votes on Friday, Polyanskiy said that Moscow would continue to veto any text other than its own.

Russia argues that the U.N. aid operation violates Syria's sovereignty and territorial integrity. It says more aid should be delivered from inside the country, raising opposition fears that food and other aid would fall under government control.

The Security Council vote on the authorisation of the aid operation has long been a contentious issue, but this year also comes amid heightened tensions between Russia and Western powers over Moscow's February 24 invasion of Ukraine.

In 2014, the Security Council authorised humanitarian aid deliveries into opposition-held areas of Syria from Iraq, Jordan and two points in Turkey. But veto powers Russia and China have whittled that down to just one Turkish border point.    (Reuters)

More on this topic
Syria and Ukraine: Humanitarian aid is Russia's political footballSyrians and the Ukraine war: "We share a similar suffering"Russia's interventions in Ukraine and Syria: What drives Putin is evident from Syria
Home
Print
Newsletter
MoreAll Topics

END_OF_DOCUMENT_TOKEN_TO_BE_REPLACED
Social media
and networks
Subscribe to our
newsletter