UN urges Libya's rivals to agree on elections this week 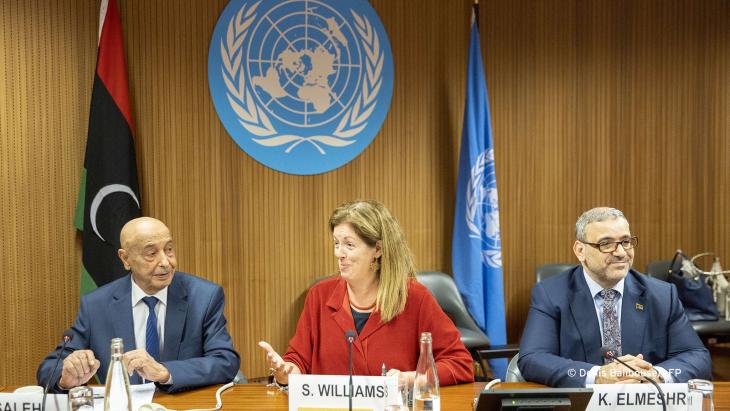 The U.N. political chief urged Libya's rival factions on Monday to agree on measures governing the transition to elections during talks in Geneva on Tuesday and Wednesday this week, expressing hope this will lead to long-awaited voting "at the earliest possible date".

Rosemary DiCarlo told the U.N. Security Council that during talks in Cairo from 12-20 June the rivals reached "a broad consensus on most of the contentious articles" in the proposed 2017 constitution, which she called "commendable".

Oil-rich Libya has been wracked by conflict since a NATO-backed uprising toppled and killed longtime dictator Muammar Gaddafi in 2011. The country was then split by rival administrations, one in the east, backed by military commander Khalifa Haftar, and a U.N.-supported administration in the capital of Tripoli. Each side is supported by different militias and foreign powers.

The Cairo meeting was the first to see Libya's east-based parliament, the House of Representatives, and west-based High Council of State in Tripoli engage in "a serious review" of the constitutional proposal since its adoption in 2017, DiCarlo said.

"We are encouraged that the leaders of both chambers have accepted the invitation of (U.N.) special adviser Stephanie Williams to meet in Geneva from 28-29 June to discuss and reach agreement on the measures governing the transitional period leading to elections," she said.

DiCarlo urged the Security Council's 15 member nations and all of Libya's international partners "to call on the leadership of the two chambers to seize the opportunity presented by the agreement reached in Cairo" and "make elections happen".

Libya's plan for elections last December fell through after the interim administration based in Tripoli, headed by Prime Minister Abdul Hamid Dbeibah, failed to go ahead with the vote. The failure was a major blow to international efforts to end a decade of chaos in Libya.

Dbeibah refused to step down, raising questions over his mandate.

In response, the country's east-based lawmakers elected a rival prime minister, Fathy Bashagha, a powerful former interior minister who is now operating a separate administration out of the city of Sirte. The rival administrations are now claiming power, after tentative steps toward unity last year.

DiCarlo called for national reconciliation efforts, warning that "continued political divisions are contributing to a tense security environment in and around Tripoli". The issue of Libya's chief executive has not been resolved and she warned that as armed group position themselves to support Dbeibah or Bashagha "the risk of escalation increases".

After the recent Cairo meeting, Libyan media reports claimed that the main contested topic was the criteria for a presidential candidacy. According to the reports, the Tripoli-based council insisted on banning military personal from running for the country's top post – apparently a move directed at Haftar, a divisive military leader who announced his bid to run in December's elections, while the east-based lawmakers called for allowing military personnel to run.    (AP)

More on this topic
Libya and the Ukraine conflict: The ever-present threat of warLibya's double tragedy: How domestic conflict and misguided intervention have destabilised LibyaA truly international conflict: How can Europe help prevent the carving-up of Libya?
Home
Print
Newsletter
MoreAll Topics

END_OF_DOCUMENT_TOKEN_TO_BE_REPLACED
Social media
and networks
Subscribe to our
newsletter