In June 2009 presidential elections will be called in Iran. The reform lobby's great hope is a man who had actually abandoned all ambitions to return to the political arena: ex-president Mohammad Khatami. Marcus Michaelsen reports from Teheran

​​ Reform activist and sociology professor Hamid Reza Jalaeipur lists forty good reasons for Khatami to stand, beginning with his charismatic charm and extending to a reduction in tensions with the west. He sees Iranian society as being on "standby".

Students, women, trade-unionists: he feels Iran's entire civilian society has been paralysed by Ahmadinejad's repressive regime, but is holding out for the chance to regain a public voice. If Khatami were to come to power it would send out the right signal and would be as popular as his previous election in 1997.

Divisions in the conservative camp

Six months before the elections, speculation in Iran about potential candidates is well under way. Criticism of current president Mahmud Ahmadinejad's style of government and his short-sighted economic policies is increasing continually. Now his re-election is being questioned even in conservative circles. This would make him the first president in the Islamic republic's history not to be routinely re-elected for a second term. Nevertheless, the divisions in the conservative camp coupled with the populace' growing dissatisfaction are feeding reformers' hopes of a comeback for Khatami. 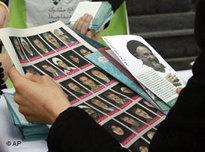 ​​ Jalaeipur published his list on the website Mowj-e Sevvom (third wave), part of a campaign intended to see Khatami take up anotherterm of office – his third. Similar websites include news on developments in the reformist camp, using the internet to compensate for their limited opportunities for press and television coverage.

At a gathering in mid November, countless artists, intellectuals and former politicians called for a resumption of reformist policies under their most famous advocate. The screen actress Leila Hatemi brought the audience to tears as, sobbing, she begged Khatami to stand again "for our children, and for everyone who wishes not to leave the country".

The much-courted man himself is remaining guarded. Although, according to sources close to him, Khatami is "slowly coming round to the idea of standing", there has been no firm assurance from him as yet. Visiting a university at the beginning of December the message was, "I'm not saying no, but...".

Speaking to a huge audience, Khatami emphasised the need for a candidate the regime had no reservations about. The person in question must be able to act unhindered in order to tackle the country's many problems. During his time in office Iran's powerful conservative elite had placed countless obstacles in his path and ultimately prevented his policies from succeeding.

Khatami might not actually find a return to day-to-day political business easy. In recent years he has continually criticised the current government and warned of the dangers of radical forces gaining power. However he recently defended his own government, sounding very much like someone on the campaign trail, pointing to the stable economic conditions and foreign relations. In a series of lectures he also developed approaches for potential future reform policies.

State leader opposes the "advance of the secular"

​​ Adopting the role of elder statesman is however undoubtedly easier than embarking on a second power struggle with the noticeably strengthened conservatives. Till now the media loyal to the government have responded to the ex-president's every public statement by launching a vendetta. A few days before Khatami's appearance at the university, Iran's supreme leader, Ali Khamenei, also repeated his attacks on the "advance of the secular" under his government.

The reformists' newly kindled enthusiasm for their godfather is a sign as much as anything of the lack of alternatives. The former parliamentary president, Mehdi Karrubi, is the only other politician to have officially announced he will stand. A moderate cleric, in the 2005 elections he came in just behind Ahmadinejad in the second round of voting. In an open letter to the supreme leader he immediately protested against alleged vote-rigging.

In the past Karrubi has certainly distanced himself from the progressive reformists, to the extent that they would be unlikely to accept him as a candidate representing the entire movement. The seventy-year-old is equally unlikely to mobilise modern middle-class voters, who represent a large potential vote if they can be persuaded not to abstain.

Abdollah Nuri: shaking the republic to its very foundations

Ex interior minister Abdollah Nuri was convicted of "denigrating Islam" in 1999 and condemned to five years' imprisonment. He had questioned the authority of Iran's supreme leader

​​ Elements of the student movement thus called on Abdollah Nuri, who held the post of interior minister under Rafsanjani and Khatami, to stand. A popular reform politician, in 1999 he was sentenced to five years imprisonment by a special court for clerics, convicted amongst other things of "denigrating Islam". In a spectacular speech defending himself, he shook the republic to its very foundations and called the supreme leader's authority into question.

According to the journalist Ahmed Zeidabadi, Nuri's courage could turn him into the mobilising figurehead for a wide movement for political change. If the conservative "council of guardians" fail to approve his candidature, they may pay for this with an extensive boycott of elections. A high voter turnout is however important to the regime in legitimising itself to the outside world.

The reformists' vitality and their dilemma

Another possibility is ultimately Mir-Hossein Mussavi, the country's last prime minister, who led Iran through the war with Iraq before his position was abolished in a change to the constitution. A pragmatic technocrat, he could build a bridge between the reformists and the moderate conservatives. Allegedly Mussavi has signalled his readiness in talks with leading individuals from both sides, but whether he finally decides to stand will be dependent on Khatami's decision.

Thus the search for a suitable candidate demonstrates the Irani reformists' vitality but also the dilemma they face. They are hoping to challenge an incumbent president whose radical followers will seek to ensure his re-election at any price; they are challenging the elite bastions of power who will resist any attempt at change.

On the other side are the people, longing for change – above all to the economy.
Steering a path between the two cannot be achieved solely by referring to the past.

Marcus Michaelson is a communications studies researcher at Erfurt University. For his dissertation on "the internet in the within the transformation process of the Islamic republic of Iran", he has spent considerable periods of time in Iran.

The Spectre of a "Soft Revolution" in Iran
The Government of the Theocracy is Worried
Nothing - neither economic sanctions nor the threat of military action - worries the regime in Tehran more than the fear of a "soft revolution". The Islamic theocracy is showing signs of panic, says Bahman Nirumand

Interview with Mohammad Ali Abtahi
Iran's "Cool Blogger"
Mohammad Ali Abtahi, director of the "International Institute for Interreligious Dialogue" in Tehran, was a close associate of the reform-oriented Iranian President Mohammad Khatami. But among young Iranians the theologian is best known as "the cool blogger." Naghmeh Hosseini spoke with Abtahi in Tehran

END_OF_DOCUMENT_TOKEN_TO_BE_REPLACED
Social media
and networks
Subscribe to our
newsletter