So far, Iran's Jews have been free to practice their religion unhindered. Recent anti-Semitic remarks made by President Ahmadinejad, however, have left them feeling uneasy. Kristina Bergmann reports

More than half of Iran's Jews have emigrated since Ayatollah Khomeini came to power in 1979
(scene from "Jews of Iran" by Ramin Farahani, The Netherlands 2005)

​​The gate to the Yusuf Abad Synagogue in Tehran's city center is left open. "We never lock it," says Arash Abaie, a young architect who regularly holds lectures in the synagogue. No one causes any trouble here or tries to steal anything. As such, there are no guards at Yusuf Abad or any of the other 19 synagogues in Tehran.

Even the numerous cabinets in the synagogue are left unlocked. They hold the torah and the religious wardrobe worn by the men who hold morning service here at 6 AM every day. "For the most part, Iranians are not anti-Semitic, yet local Jews do not like to draw attention to themselves on the street," says Abaie.

Strength for the day

Abaie does things differently. He continues to wear his kippah even after religious services. "Five minutes into a job interview with an architectural office, I said that I am Jewish and that I couldn't work on Saturdays." Abaie was rewarded for his openness. He got the job and can fulfill his Saturday religious obligations. However, very few of Iran's 25,000 Jews share Abaie's self-assertiveness.

Most of those attending synagogue do so at dawn before work. Abaie jokingly says that most Iranian Jews prefer to be traders or doctors so that they don't have to let anyone know their religious affiliation. 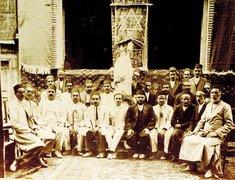 Judaism is one of the oldest religions practiced in Iran and dates back to the late biblical times. Pictured is a group of Hamedan Jews in a historical photo from 1918
(photo: National Library of Iran)

​​Whether businessman or office worker, everyone at the morning services wants to power up for the long day ahead. Binding the leather straps of the tefillin around one's arm and slipping on the tallit, the white and blue prayer shawl, serve to help in this purpose. The tefillin are imported, while the tallit are woven in Iran from Persian cotton.

After half-an-hour, a torah roll is taken from a carved wooden chest. In keeping with Sephardic tradition, the torah is covered with a cloth. In the Yusuf Abad Synagogue, they use a rose-colored lace cloth. An old Jewish woman lets out a shout of joy and throws kisses in the air. She maintains that the service helps her to cope with life. Like her elderly Muslim neighbor, she no longer fears ending up in hell, she says.

Just behind the synagogue is a kosher butcher shop. There is no indication from the outside that the owner is Jewish, yet on the wall inside hangs a picture of Aaron, the brother of Moses. Butchering is done only on Mondays, although plucked chickens are available daily. The butcher doesn't say much, but then his customer Mitra, a housewife, is all the more talkative. She only cooks kosher, as is the duty of every Jewish family, she explains.

The synagogue as a marriage bureau

Mitra's husband, the cloth dealer Farman Misri, does not share this view. Eating kosher isn't really all that important. What truly matters is being firmly integrated in one's surroundings. Misri says he gets along excellently with his Muslim employees, his neighbors, and curtain and rug dealers. He seems so helpful and sincere that one is inclined to take him at his word.

Misri admits he is actually a Kurd, but moved to Tehran because business in the capital is better. "And, of course, because of my wife." For Misri, there was never any question of marrying anyone outside of his faith. "The Shiite Muslims, the Christian Armenians, and we Sephardic Jews express mutual tolerance, yet we lack the will to intermarry," he said with a wink.

The attractive Mitra met Misri at the synagogue. "It is the ideal marriage bureau," he claims. The proverbial solidarity between Jews proved to be extremely helpful when he came to Tehran. Despite or perhaps because of this, he doesn't want to leave Iran. Misri alludes to the many Jews who have already emigrated. "They have forgotten that the sky has the same color everywhere," says Misri. In any case, he wants to be buried in Tehran, he says assuredly.

The Jewish cemetery in the south of Tehran is evidence not only of the extremely large Jewish community living in the Islamic Republic of Iran, but also of the increasing number of Iranian Jews who have decided to emigrate. Most of the graves appear well-attended, yet then the woman groundskeeper points to the edges of the cemetery.

​​Here, the burial plots are overgrown and the monuments sunk deep into the ground. "Before the revolution in 1979, some 100,000 Jews lived in Iran," informs Moris Motamed, the Jewish representative in the Iranian parliament (all Iranian minorities have one or two members of parliament, depending on their size). According to Motamed, an average of 2600 Jews have emigrated annually over the past quarter century. The rich and secular tend to move to the USA, while poor and religious Jews head for Israel.

A civil engineer by profession, Motamed has already been elected to parliament for the second time. He claims that he has truly succeeded in helping the country's Jewish community. Thanks to him, today Jews can become civil servants. In addition, there is now a special budget for Iran's minorities.

Motamed also helped solve the problem of making trips to and from Israel. "Iranian Jews can now visit their relatives in Israel without difficulty, merely by making a stop-over in Cyprus," says the member of parliament. Even Israelis of Iranian heritage can today once again visit the country of their birth. The Iranian Consulate in Turkey can issue a special passport for such a trip.

Obsessed with the thought of emigration

It is unclear if these improvements have led to a decrease in the flow of Jewish emigration. According to Motamed, today only 500 Jews a year are leaving the country. "Iran has one of the oldest Jewish communities in the world, and no Jew voluntarily abandons his homeland," asserts Motamed. "I only speak Persian and Kurdish. Where else should I go?" asks Misri.

Abaie, on his part, stresses that he wants to remain with his elderly parents. Mitra also doesn't want to leave. Nonetheless, she is convinced that every Jewish Iranian is obsessed with the thought of emigration. Muslim students in Tehran believe that Iran's Islamic system of government and President Ahmadinejad, in particular, are responsible.

These students bluntly say what Iranian Jews don't dare to utter. Ahmadinejad is attempting to ingratiate himself with the Arabs by posing as an anti-Zionist, although he is in fact anti-Jewish. He proved this with the Holocaust conference and would prefer if many more Iranian Jews emigrated, said one student.

The governing dictatorship is driving away bright people from every religion, and Iran is suffering from a terrible brain drain.

Motamed has recently become self-employed. He now consults companies requiring satellite photos. His office looks modern and he seems to be successful. Abaie and Misri are also doing well. They probably don't often think of emigrating. If they were to leave the country, it would be a great loss for Iran, similar to that posed by the emigration of bright Muslim students.

This article was previously published by the Swiss daily Neue Zürcher Zeitung.

END_OF_DOCUMENT_TOKEN_TO_BE_REPLACED
Social media
and networks
Subscribe to our
newsletter