Universities in Iraq have experienced a series of changes over the last few years. Many students nowadays refuse to be taught by professors who have no real academic qualification but simply used to represent the Ba'ath regime. Ahmad al-Saadawi reports 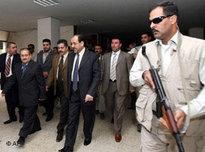 Universities in Iraq are under the influence of religious pressure groups. Recently, the prime minister, Nouri al-Maliki, issued a decree requiring the removal of all political and religious symbols from universities

​​The change in the Iraqi political system has resulted in increased self-confidence among students. They insist that leading positions at the universities may be filled only by those who have a clean record. And, in practice, no-one can effectively run a university, a technical college or a faculty without the approval of the students.

But in some cases the self-confidence of the students has turned into a readiness to use violence against teachers and the educational system. Old symbols of totalitarian power have disappeared from the universities and been replaced with a wide variety of political symbols. Posters for the new political parties cover the walls.

It seems as if we are once more experiencing the pluralism which used to apply at Iraqi universities before the Ba'ath party came to power.

On the other hand this new pluralism is defined along religious lines, since university administrations are so run-down that they are no longer in a position to offer any alternative to the country's generally miserable political situation. They cannot guarantee the conditions which make an institution into a university.

The presence of political influence and parties in the universities has a bad influence on them, and many writers and academics would like to see them insist on political neutrality. The prime minister, Nouri al-Maliki, issued a decree requiring the removal of all political and religious symbols from government buildings and universities. But the decree has only been carried out to a very limited extent. 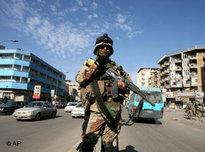 ​​In Iraq, university teachers always have to take account of the authority of the ideological community to which a student belongs. They do not risk confrontations which they might lose – especially since the laws which would protect them are scarcely taken seriously.

Many teachers – not only former Ba'athists – hide behind a mask of religiosity. They remove their ties, perhaps grow a beard. They start using religious idioms when they speak, wear a seal ring and carry a rosary. It's clear that a new age has begun. They have to adapt if they are to hold on to their jobs and their standard of living.

No-one can fail to notice the increasing influence of Islamism, which is having an ever greater effect on various areas of life in society. The universities have already come firmly under Islamist influence. One example of this is that student unions in many places have already issued rules as to how female students should dress and behave. The teaching staff react with indifference or fear.

The confessional polarisation evident in political life is being carried over to the universities. One can see how the universities little by little are moving towards being either Sunni or Shiite institutions. Religious affiliation becomes the decisive factor for students or teachers considering their choice of university.

At the level of the national discourse, this tendency is never referred to, still less approved of; in fact, no-one mentions the fact that universities have already been split on confessional lines. But if nothing is done to change the situation, Iraqi universities will find themselves in an increasingly serious situation.

This politico-religious polarisation in the universities and the continuing bloody conflict have made students into targets. There has recently been a series of suicide bombings at the Mustansiriya University in Baghdad.

The most recent, involving two vehicles loaded with explosives and a suicide bomber wearing an explosive belt, led to many fatalities, among both students and teachers. I will not be able to forget the deeply distressing scene as the injured were being carried away: a surrealistic choir of mobile telephone ring-tones went on and on, as worried family members tried to ring their relatives, and no-one could answer.

The universities are at the centre of the country's tensions. The various factions win points at the expense of the student body, which has been ripped apart. Student life is slowing down. New problems have been added to the old. For example, some students only attend once a week or less. They know that the university can do nothing to stop them.

Another example: students from the Baghdad Institute for Oil Studies chose to do their practical placement in a state hospital. They should have gone to the big oil refinery in the Baghdad suburb of Daura, but, as Shiites, they were frightened of attacks by armed Sunnis.

The universities in Baghdad also have to deal with shortages of staff. Many lecturers in natural sciences have fled abroad. They fear for their lives after receiving threats or after having seen how their colleagues have been killed.

But it's the students who most suffer under the insecurity. The kidnapping of some female students has put the rest in a state of permanent fear. Many of them also suffer from increased control by men. Some particularly radical young men even operate as a kind of vice squad, and call in women for wearing the wrong clothes or make-up.

Measures will no doubt be taken to deal with the most serious issues. But part of the problem stems directly from the general political and social conditions, which are not designed either to create the right climate for teaching or to enable free intellectual discourse. Both are needed if the situation is to improve.

But the current insecure transitional period in which the country finds itself does not lead one to expect a positive future for Iraqi universities and other institutions which are committed to the development of civil society in Iraq.

If Iraqi universities were to open themselves once more to an exchange with universities abroad, and were it to be possible to recreate the liberal atmosphere which characterised Iraq as it entered the modern age, then that would create a fruitful ethical basis for academic education in the future.

We need a new educational elite made up of academics from all disciplines who have qualifications from internationally renowned institutions, just as was the case in Iraq fifty years ago.

The first step must be to resolve the political and security problems of the country. Political conflicts have to be kept out of the universities.

The authority and the academic discourse of the academic leadership must be constitutionally and legally protected. This would strengthen the self-confidence which the universities need if they are to make their potentially major contribution to the reformation of the country.

Media and Freedom of Speech in Iraq
From Dictatorship of Opinion to Polarisation
The situation for the Iraqi media changed completely after the fall of the Ba'athist regime. Iraqi journalist Ahmad al-Saadawi outlines the latest developments

Ian Buruma on Saddam Hussein
Last of a Kind
In our age of religious militancy and global capitalism, the 20th century dictator in uniform with a populist "Robin Hood" mystique has become an anachronism, writes Ian Buruma. In his article, he takes a look at Saddam Hussein's style of reign and reflects on what future autocrats will look like

END_OF_DOCUMENT_TOKEN_TO_BE_REPLACED
Social media
and networks
Subscribe to our
newsletter