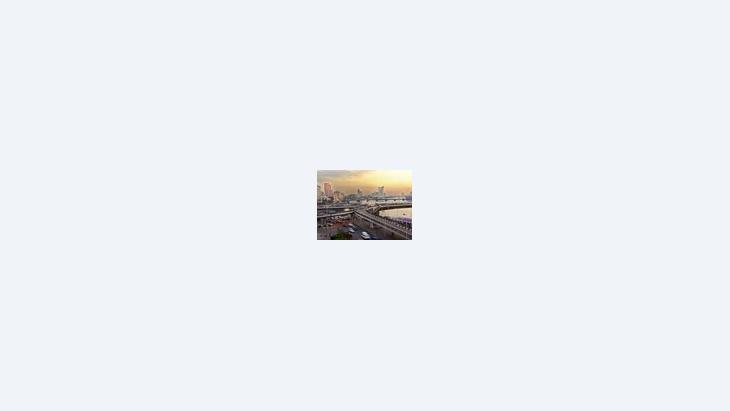 Unofficial State of Emergency in Cairo

As in all predominantly Islamic countries, life in Cairo is turned on its head during the month of Ramadan. Jürgen Stryjak's report conveys the general atmosphere in the city.

As in all predominantly Islamic countries, life in Cairo is turned on its head during the month of Ramadan. Jürgen Stryjak’s report conveys the general atmosphere in the city.

Anyone visiting Cairo in the coming weeks will experience a very strange spectacle. From 2 o’clock in the afternoon, the already slow-moving traffic in the 17-million metropolis comes to a complete standstill. Irritated policemen scurry about congested junctions and clusters of people surround tiny buses before they come to a halt in an attempt to secure themselves a seat. All of this is accompanied by an uninterrupted chorus of hooting horns. This is Cairo in a state of emergency; this is a typical afternoon during Ramadan. And that means two things: tummies are empty and the streets are full. All offices, authorities and most businesses shut up shop for the day between two and three o’clock. Then, almost all Cairo residents make their way home to ensure that they are at the table in time for Iftar, the break-fast meal. ‘If people would only be patient,’ says taxi driver Mahmoud Salama, ‘they could leave at four, one hour before Iftar. Then the streets would be empty and they would be home in a matter of minutes. On time.’

Ramadan is full of everything that is dear to religious Muslimsfasting, praying and giving to the poor. The only thing that disappears completely on afternoons during Ramadan is the typical Egyptian patience. Iftar is the most important part of the day. Everything centres on the celebration meal after sunset, when after a day of abstinence, all of the pleasures of lifeeating, drinking, smoking, tenderness between spouses, pleasant scents like perfumes etc.can be enjoyed to the full until daybreak. To a certain extent, the month of fasting could be compared to a four-week Christmas. If there is anywhere in the Islamic world where Ramadan has maintained its original sparkle, then it is in Cairo. Chains of light flicker on and off in doorways and windows. In the poorer districts in particular, children decorate the streets and lanes with bunting and Ramadan lanterns. Ramadan marks the time when Allah sent the Koran down from heaven to the prophet Mohammed and revealed the first chapters of the Koran to him. This is what makes Ramadan such a holy month.

It also explains why every year, more and more people complain that this feast of contemplation and reflection has turned into a feast of gluttony and insensate tv-viewing. Families break the household budget by preparing opulent celebration meals, where only the best anddepending on what is in the kittymost expensive foods are dished up to impress relations and neighbours. Throughout the year, television channels produce special soap operas, game shows and music shows that rain down on viewers for the four weeks of Ramadan. The people of Cairo sit in coffee houses and marquees and celebrate with tea, hookahs and cultural entertainment until well after midnight.

No alcohol during Ramadan

Those who don’t fast during the day, eat in secret out of politeness to others. Ordinary snack bars are closed for the entire month of Ramadan. However, food is served during the day in the more exclusive restaurants. Even though a McDonald’s restaurant on Pyramid Street has put potted palm trees in the window, people eating inside are still visible from the outside. ‘I have even seen fasting Egyptians offering tea and biscuits to their compatriots who are not fasting,” says the American Mary Awbrey, tutor at a school in Cairo. As a foreigner, she can adapt very well to Ramadan. ‘At night, Cairo is magical. This makes up for all the restrictions. However, it can happen that I am served beer in a restaurant while my Egyptian companion is not served any.’ Shops that sell alcohol also remain closed during the month of Ramadan.

‘I know Muslims,’ says Magdi Naguib, a Christian, ‘who don’t take their religion too seriously for the rest of the year: they drink alcohol and don’t pray. But during Ramadan, they change completely and are suddenly all religious.’ In the first ten days of Ramadan, about nine out of ten adult Muslims in Cairo fast. As the month wears on, however, will power wanes and eventually only about 70 per cent observe the fast. Initially, the mosques are full of people who have come for the Tarawih (night prayer), for which one-thirtieth of the Koran is recited every evening during Ramadan. At the end of the month, however, the mosques are only half full. As a Christian, Magdi Naguib has no problem with the month of fasting. He says that even though there is sometimes tension between the religious groups, this has nothing to do with Ramadan. ‘A church in Shubra even organises a daily break-fast banquet for Muslims.’

Giving to the needy

The best evidence of how deeply rooted the spirit of Ramadan still is today is Mawa’id ur-Rahman (the tables of mercy), where the well-to-do of Cairo provide Iftar for the needy, sometimes thousands of portions per evening and donor. All over the city, these tables are to be seen at sundown, set for the meal, neatly arranged in long rows, and waited on by volunteers. Donations of clothes are also typical. According to an old tradition, the people of Cairo celebrate the three-day Festival of Breaking the Fast at the end of Ramadan by wearing new clothes. ‘It is a custom,’ wrote Georg August Wallin in 1844, ‘that everyone must have a new outfit or at least a new item of clothing for this festival. This is why the streets of Cairo, and in particular the large markets and bazaars, are unusually busy in the last days of Ramadan. Everyone wants to buy something.’ This is still true to this day.