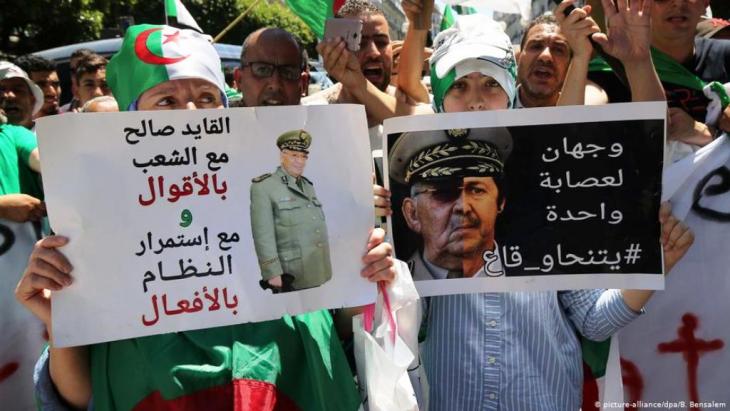 Algeria's political impasse has been going on for weeks. Attempts to calm the public mood by sacrificing some of the Bouteflika faithful has only served to fuel demonstrators' demands that all such remnants of the old guard be rooted out. Whether there is an election or not, the crisis seems set to continue, writes political analyst Ali Anouzla

Algeria is teetering on the edge of a serious crisis. It is at a crossroads and it is hard to say which way the country will go. On the one hand, disregarding tensions such as the country has not seen since its independence in the early 1960s, the authorities are insisting on ploughing ahead with presidential elections. On the other, huge demonstrations, which for the past ten months have protested against the ruling establishment and the idea of elections under its aegis, are still taking place every week.

At the same time, the country is witnessing unprecedented legal trials of the most prominent faces of the ruling regime – including two prime ministers, ministers and business leaders – on serious charges, ranging from corruption and squandering of public funds to the abuse of power. Leading figures who until recently ruled Algeria, including the brother of ousted President Abdelaziz Bouteflika and two senior intelligence and military officers from that time, remain in prison after being convicted on serious charges of violating the authority of the army and conspiring against the government.

Against this background, which would have been unimaginable in Algeria only a few months ago, more and more people are taking to the street, rebelling against and suspicious of everything, even of the legal proceedings against these former regime henchmen. After all, the establishment, or what is left of the old regime, is still in place, even if it has offered up its most prominent figures.

No trust in the General

The political impasse has been going on for weeks. Attempts to calm the public mood by sacrificing some of the Bouteflika faithful has only served to fuel demonstrators' demands that all such remnants of the old guard be rooted out.

According to the army commander and strongman, General Gaid Salah, who is busy trying to save the regime, all the people's demands have been met. Now it is up to the protestors to head to the ballot box in order to choose a new president.

But the protesters, whose movement is growing in leaps and bounds from week to week, regard the trials of a few regime faces as merely minor re-structuring. Moreover, they see the elections as a means of circumventing their demands – an attempt to perpetuate the old regime with more of the same.

What makes the Algerian equation seem so fraught and complicated today is the fact that both sides are clinging stubbornly to their long-held positions; there are no serious interlocutors. Those in authority who are ready to talk to the demonstrators are the very ones whom the protesters have been seeking to clear out. While, despite their movement’s rapid growth, the protesters have failed to appoint serious representatives with the credibility to negotiate in their name.

Demanding a clean break with the old regime

The current leadership, which is an extended arm of the former regime, rejects the people's demands for a complete change of system. Not only is it opposed to the dismissal of the surviving representatives of the old system, but it is also opposed to the dismantling of institutions that represent them, and thus to the creation of transitional institutions that could replace their predecessors and pave the way for a new Algeria.

Any solution that does not result in early presidential elections is rejected by the state leadership, which sees them as the only way out of the political impasse.

The popular movement refuses to allow the old regime to continue in any way, shape or form. After all, it is accused of decades of corruption and the rigging of elections, and so to allow it to supervise any new elections would merely produce more of the same.

At a crossroads like this, there are many ways this could go, and it’s difficult to predict what will happen, even in the near term. This uncertainty is accentuated among Algerians themselves, because of the fixed positions of both the authorities and the protesters.

It will not be easy to find a way out of this situation, whilst the maintenance of the status quo is linked to a number of unpredictable factors, not least of which are the actions and counteractions of the two sides. Indeed, there has been a marked escalation over the past ten months. The regime was banking on the fact that the popular mobilisation would not last. But the passage of time has not weakened the protests, as they had hoped. In consequence, the government is now insisting on going ahead with the presidential elections, even if everyone else boycotts them.

You may also like: The closing window for change

Meanwhile, the popular movement opposes the regime’s attempt to cling to power, although being afraid to confront it. It is seeking to maintain strong and peaceful mass action, but it is unable to produce a leadership or a mechanism that represents it in order to talk and to negotiate in its name.

As for the army, it is the only institution which still retains its power, unity and cohesion. Long considered the de facto ruler of the country, the army faces a major choice: should it stand alongside the popular movement, which may encourage the latter to augment its demands still further, or should it stand against the masses, however bad the consequences might be.

Thus, the army commander, General Gaid Salah, has been keen, since the beginning of the crisis, to dance to both tunes at the same time, showing both the carrot and the stick. Few observers think that there are any options he has not tried to respond to the demands of a movement which may end up demanding his own head.

As for the alternative, confronting the movement with force reminds Algerians of the tragic events surrounding the army's intervention in 1988, when Algerians protested against the one-party system, or as happened in 1992, when the military forcibly stopped the electoral process. This ushered in a decade of darkness, the nightmare of which many Algerians still remember.

The Algerian crisis looks set to continue, whether the election happens or not. No one is waiting around for the results, because they won’t really resolve the impasse, which worsens with every passing day.

Moroccan author and journalist Ali Anouzla is also the director and editor-in-chief of lakome.com. He has founded and edited several Moroccan newspapers. In 2014 he received the "Leaders for Democracy" award from the American organisation POMED (Project on Middle East Democracy).

Home
Print
Newsletter
More on this topic
Military dictatorships in the Middle East: The real enemies of the Arab SpringInterview with Algerian opposition leader Soufiane Djilali: Political crisis in Algeria – is compromise in sight?Revenge is not the answer! Prosecuting tyranny in the Arab world
Related Topics
Abdelaziz Bouteflika, Algerian Opposition, Arab Spring, Arabellion, Democracy and civil society, Military, Rule of law
All Topics

"The people aren’t ready for democracy" has been the constitutional basis for Arab tyranny, its favourite slogan and its sacred narrative for more than a century. Yet, asks Khaled ... END_OF_DOCUMENT_TOKEN_TO_BE_REPLACED

As current events continue to remind us, people all over the world are constantly being forced into exile. "Songs of Exile", created by Algerian Berber exile Abderrahmane Abdelli ... END_OF_DOCUMENT_TOKEN_TO_BE_REPLACED

A new survey by Arab Barometer adds numbers to the narrative that COVID has led to a harsher reality for women in the Middle East and North Africa. By Jennifer Holleis and Razan ... END_OF_DOCUMENT_TOKEN_TO_BE_REPLACED

Algerian scholar Said Djabelkhir rejects the charge of "offending Islam". In interview with Ismail Assam, he maintains that he has been wilfully misconstrued. At the same time, he ... END_OF_DOCUMENT_TOKEN_TO_BE_REPLACED

The Libya Conference will be held in Berlin on 23 June. Much has been achieved since the last Libya Conference in Berlin in January 2020. The ceasefire is holding, there is a ... END_OF_DOCUMENT_TOKEN_TO_BE_REPLACED
Author:
Ali Anouzla
Date:
Mail:
Send via mail

END_OF_DOCUMENT_TOKEN_TO_BE_REPLACED
Social media
and networks
Subscribe to our
newsletter