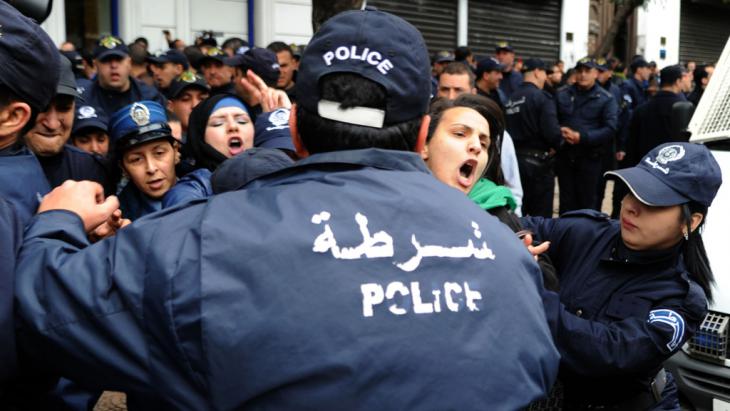 Algeria′s austerity measures are driving protests among its previously acquiescent middle class and the state is hardening its stance against such unrest. An analysis by Idriss Jebari

Protests against rising costs of living in Algeria turned violent on 2 January in Bejaia and Bouira, in the east of the country. The frustrations behind the protests had been bubbling under the surface since the population began to feel the effects of the state′s declining oil revenues and proposed austerity measures. The protests highlight growing resentment toward the political leadership and the deepening rift between them and the Algerian middle class, which has gotten little acknowledgement of its hardships during the economic downturn.

For the second year in a row, the state′s budget has been slashed significantly due to low oil prices: as a result the 2017 budget is about $63 billion, a little more than half the $110 billion it was in 2015. Hoping to avoid depleting its foreign currency reserves or incurring high foreign debt, the authorities spent 2015 and 2016 launching various measures to reduce imports, for example by imposing quotas on imported cars.

Rumours are multiplying that international financial institutions, including the IMF Mission in Algiers, have stalled their efforts to spur Algeria to enact profound economic reforms. Expert assessments of the country′s reform prospects echo these feelings, citing as impediments entrenched crony capitalism, a large informal sector and a weak private sector.

Not only have these issues weakened the state′s ability to privatise and become less dependent on energy exports, but it is also relying on increased taxes to fill the void of falling oil revenues and keep the large state apparatus running.

Playing with fire: the Algerians remember 5 October 1988 all too clearly. Following the oil price crash in 1986, the government cut subsidies which triggered civil unrest. The nineties subsequently saw Algeria plunged into a bloody civil war between the government on the one hand and Islamist forces on the other. Some 150,000 people died. Neither Bouteflika′s political elite nor the Algerian population are looking to repeat this ″blackest of decades″

In addition to the failure of reform attempts, Algerians have struggled with rampant inflation that has affected food prices. The public has been outraged by the hike in sardine prices, traditionally a popular and accessible fish and fresh fruit, which has become a form of ″luxury″. Official statistics released in October 2016 show that both fresh fish and fruit have become more than three times as expensive since 2001. With Algerians spending about 40 percent of their income on food and drink, which are often imported and very sensitive to price increases, the burden has been felt most by ordinary Algerians.

The new budget, which was adopted in November 2016, is sure to exacerbate this trend. The budget includes a general 2 percent increase to the existing value-added tax (VAT), in addition to more targeted increases for everyday products such as fuel, tyres, alcohol, tobacco and administrative services like issuing passports.

For several weeks, Algerians had clung to the hope the finance law would be amended, not believing that the authorities would include such economically hurtful measures.

Shortly before President Abdelaziz Bouteflika signed the law on December 28, some sections of the National Association for Merchants and Artisans (ANCA) called for a week of protests ″against rising prices″, which would involve shutting down their storefronts and demanding a repeal of the budget. Turnout was particularly high in the Kabylie region, which has a history of resentment toward the central state and in Bejaia and Bouira violent clashes emerged between police and protesters. ANCA released a communique distancing itself from the violence, reiterating the claim by social media users that ″barons″ from the informal import economy were behind this urban unrest. They alleged that these barons encouraged strife to put pressure the state to repeal the tax increases that will drive down sales.

The reaction to these protests is telling of where the country stands. According to Algerian journalist Lakhdar Benchiba, the authorities are clearly stoking conspiracies of foreign meddling in order to delegitimise protesters′ economic and political grievances. Prime Minister Abdelmalek Sellal eventually addressed the media as smaller protests spread to the capital. He sought to discredit the protesters, calling them ″minorities attempting to destabilise Algeria″, while thanking vigilant youth on social media for countering ″false reports″. In a wide populist media campaign, authorities called on Algerians to display the national flag in their windows as a way to protest chaos.

Bouteflika – a wavering president: the middle class has turned a blind eye to a dysfunctional political system and wealth inequality in exchange for security and ever-greater access to consumer goods. The drastic drop in oil revenues and the government′s current austerity policies, however, are straining Algeria′s social contract with its loyal middle classes

This reveals a changing mindset among the political leadership. The government used to tolerate low-level protests calling for better distribution of economic resources. These protests mostly posed no risk because the population was tired of politics and fearful of violence – a result of the length civil war during the nineties.

Many Algerians therefore regarded the state as the legitimate redistributor of oil rents through housing, infrastructure, or scholarships. Due to the state′s shortage of money, protests now carry great risks. The current economic difficulties have highlighted the past decade′s waste and poor management of oil revenue and the state′s image has suffered in the process.

In recent years, several localised and single-issue protests have escalated and acquired national significance, such as In Salah′s anti-shale gas and fracking protests in spring 2015 and the contract teachers′ march toward Algiers between March and June 2016. The authorities responded with force to these two protest movements, causing Amnesty International to warn in May 2016 that state repression is hardening toward protesters and opposition. As the state delegitimises single-issue protests, a climate of social discontent has spread across Algeria.

Yet while the grievances of single-issue protesters can be addressed and their anger contained, the greater and often neglected concern for the Algerian authorities is the disaffection of the middle class. President Bouteflika took power in 2001 and steered the country away from civil war, their fortunes improved. Algeria′s generous social welfare programme made health, education and employment accessible to them, propelling Algeria above its neighbours on the UNDP′s human development index. The middle class has turned a blind eye to a dysfunctional political system and wealth inequality in exchange for security and ever-greater access to consumer goods. 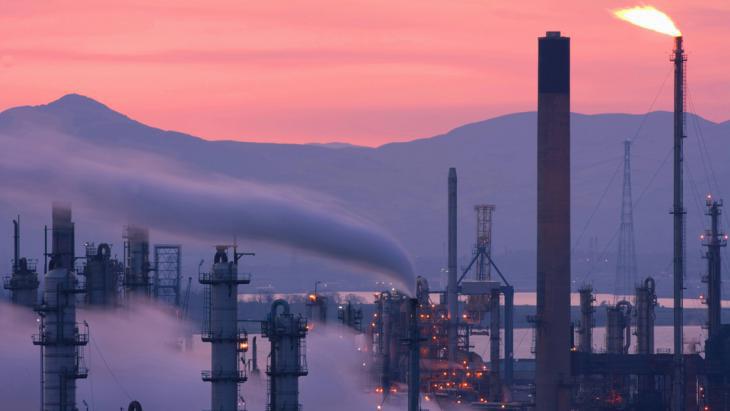 Weathering the storm: according to the International Monetary Fund (IMF), Algeria′s oil and gas revenues dropped by 30 percent following the recent oil price crash. In 2015, the fiscal deficit reached 16.4 percent – the highest level ever recorded. The fact that Algeria has been able to weather the storm has been mainly thanks to its reserves: prior to the financial crisis, Algeria was in possession of the eighth largest currency reserves in the world and little foreign debt

But current fiscal pressures are straining the state′s social contract with citizens. In October 2016, parliament discussed the possibility of amending the 1997 retirement law to increase the minimum ages at which government employees can begin to collect pensions. Djaouad Bourkaib, the director of the National Social Security Fund declared the current model unsustainable for future generations. Trade unions quickly organised protests in Algiers that were then repressed by the police.

In December, President Bouteflika conceded to public pressure and put a two-year moratorium on the amendments, but unions have vowed to continue mobilising against the changes to the country′s large public sector. This reinforces the argument that the country has stopped caring about ordinary Algerians.

This month′s protests reveal the state′s dangerous fall-out with a middle class that feels unacknowledged. Yet without this middle class, the Algerian state cannot speak as representative of the ″silent majority″ while continuing to demonise protesters as a minority of unpatriotic ″vandals″. That could well be the true hidden cost of austerity in Algeria.

Idriss Jebari is a postdoctoral research fellow with the Arab Council for Social Sciences working on social and cultural change in North Africa.

Her grandparents are Jews – born in Tunisia and Algeria. Director Cleo Cohen has now broken the silence about this with a very personal debut. By Nadine Wojcik END_OF_DOCUMENT_TOKEN_TO_BE_REPLACED

Moncef Marzouki was Tunisia's first democratically elected president after the fall of dictator Ben Ali. Today he is the most prominent critic of increasingly counter- ... END_OF_DOCUMENT_TOKEN_TO_BE_REPLACED

Moroccan sociologist Fatima Sadiqi believes that women's movements in North Africa have changed over the past ten years. Today, women from all social classes are fighting together ... END_OF_DOCUMENT_TOKEN_TO_BE_REPLACED

Shot, beaten to death or drowned: a demonstration by tens of thousands of Algerians ended in the "Paris Massacre" on 17 October 1961. Sixty years on, historians and victims' ... END_OF_DOCUMENT_TOKEN_TO_BE_REPLACED

The memory of experienced injustice plays a central role in the transformation of societies towards democracy. In the Arab world, the critical study of memory is only just ... END_OF_DOCUMENT_TOKEN_TO_BE_REPLACED

"The people aren’t ready for democracy" has been the constitutional basis for Arab tyranny, its favourite slogan and its sacred narrative for more than a century. Yet, asks Khaled ... END_OF_DOCUMENT_TOKEN_TO_BE_REPLACED
Author:
Idriss Jebari
Date:
Mail:
Send via mail

END_OF_DOCUMENT_TOKEN_TO_BE_REPLACED
Social media
and networks
Subscribe to our
newsletter