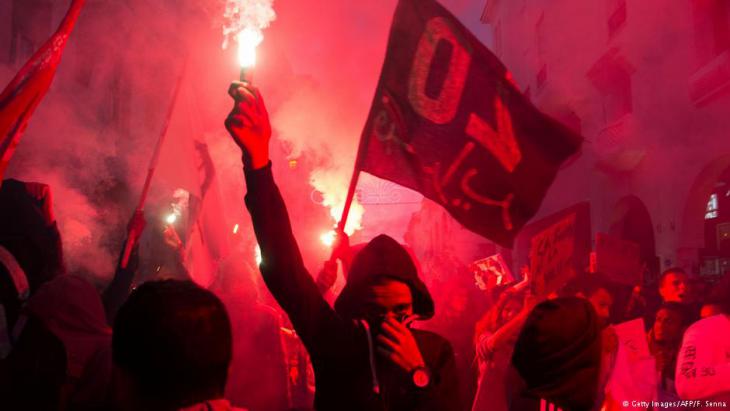 Condemned to eke out a living

Symptomatic of the widespread poverty and oppression within Moroccan society, the tragic death of the fishmonger Mouhcine Fikri has touched a raw nerve among the population. Attempts to defuse the situation are ongoing. Matthew Greene reports from Rabat

Protests throughout Morocco continued over the weekend after thousands took to the streets in response to the death of fishmonger Mouhcine Fikri in the northern port city of Hoceima the previous week. Fikri was crushed to death by the compactor of a garbage truck after an altercation with police who first confiscated and then disposed of his produce. His death has now triggered the largest protests in Morocco since the February 20 movement organised mass demonstrations calling for democratic reform in the spring of 2011.

Video footage and photos of the gruesome event were captured on the mobile phones of bystanders which then quickly circulated on social media sites such as Facebook and Twitter, sparking a torrent of angry reactions. The incident trended with an Arabic hashtag reading ″grind him″ after allegations that one of the police officers ordered Fikri be crushed as he jumped in the rear of the garbage vehicle to salvage his fish. Moroccan police immediately denied this accusation.

The large-scale demonstrations that appeared throughout the country in the following days have required a delicate response from the Makhzen, a term used to refer to Morocco′s elite establishment. Last Tuesday, Moroccan officials ruled the death an involuntary homicide and said that a criminal investigation concerning 11 individuals will stand before a court to face charges that also include forgery and complicity.

The statement was released just days after the Ministry of Interior delivered royal condolences to Fikri′s family on behalf of Moroccan King Mohammed VI, who is currently touring East Africa. The ministry has promised the family to punish those responsible under strict application of the law.Meanwhile, members of Fikri′s family have expressed their wish to see that their son′s death not be exploited by others for political causes. In an appearance on Moroccan state television, Fikri′s brother claimed that social media is full of ″political manipulation and lies″, a claim that some insist was made out of pressure from high officials on the family. 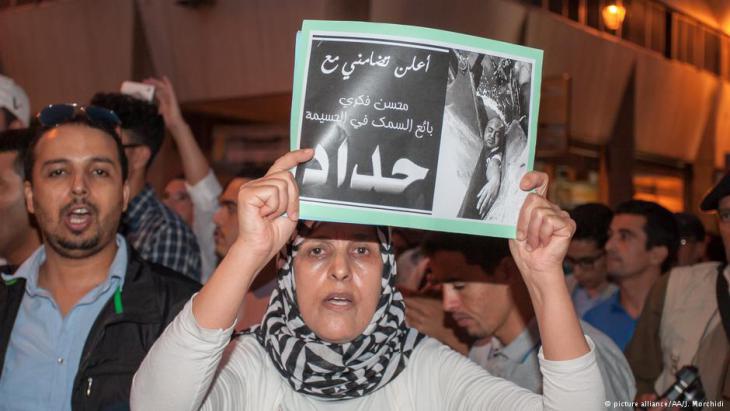 Disturbingly symbolic: crushed to death by the compactor of a garbage truck after an altercation with police who first confiscated and then disposed of his produce, Mouhcine Fikri's death is a sharp reminder of the poverty and oppression that tens of thousands of Moroccans struggle against day to day

Morocco′s monarchy is keen to prevent the current environment from growing to resemble the unrest of 2011 when demonstrators called for greater freedoms and rights. Those protests won constitutional reforms that transferred some of King Mohammed′s absolute powers to an elected government.

The kingdom sees itself as a steady hand in guiding economic reforms and guaranteeing social stability in an uncertain regional geopolitical theatre. Recognising these realities, some citizens are warning protesters of the risks involved with sustained demonstrations, accusing both organisers and participants of seeking political opportunism with no consideration of the possible consequences.

Yet, with many Moroccans extending their anger and frustration with police misconduct to corruption at the highest levels of the state, it is now too late to undo the emerging politicisation of Fikri′s death. A handful of commentaries in local media have recognised how the tragic incident is disturbingly symbolic of the poverty and oppression that tens of thousands of Moroccans struggle against day to day.

Fikri′s death has drawn parallels to Mohamed Bouazizi, the Tunisian street vendor who immolated himself after facing similar harassment from police and who is widely credited for inspiring the Arab Spring. Last Friday, demonstrators in Hoceima were reported chanting ″Sidi Bouzid is not far from here,″ in a gesture to Bouazizi′s hometown.

Like Tunisia in 2011, Fikri′s death has touched a nerve of popular resentment over unemployment, stagnant wages, wealth inequality and state corruption. Western news agencies are now monitoring Morocco to see if the similar circumstances between the deaths of Bouazizi and Fikri will ignite a similar Arab Spring movement.

In an interview with US radio programme Democracy Now earlier in the week, Moroccan anthropologist Miriyam Aouragh observed that the mostly youth-driven protests are ″partly a continuation of the explosion in anger and protest in 2011.″ Morocco has also experienced a steady flow of demonstrations over the past 5 years against public utilities and energy, education, natural resource exploitation and the Western Sahara issue.

However, anticipation of a revived Arab Spring movement in Morocco remains premature. Security forces have so far appeased public gatherings to avoid heightening tensions while a lull in demonstrations last week and a rescheduling over the weekend suggests a more calculated approach to political organising. Both facts suggest that Fikri′s death will not provoke a national revolution and neither will it set off a spark across North Africa. 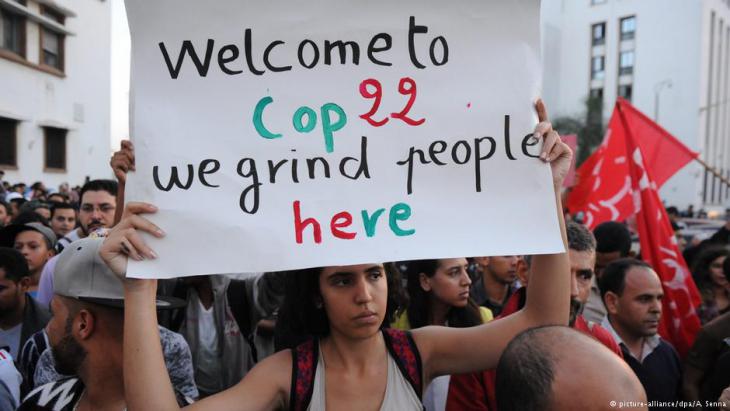 Arab Spring revisited? As in Tunisia in 2011, Fikri′s death has touched a nerve of popular resentment over unemployment, stagnant wages, wealth inequality and state corruption. Meanwhile the monarchy regards itself as a steady hand in guiding economic reforms and guaranteeing social stability in an uncertain regional geopolitical theatre. Time will tell

Fikri′s death has already stirred a national discussion about state economic policy, attracting scrutiny over liberalisation programmes and privatisation of the economy. Fikri was confronted by authorities for attempting to sell swordfish at an estimated value of $11,000. According to Moroccan law it is illegal to sell the endangered fish at this time of year.

Some are asking why Fikri violated this regulation, though nobody is claiming he deserved to die for breaking the law. Those defending Fikri, who by all accounts was poor, however say that Moroccan fishing agreements with the European Union are plundering local fish stocks, devastating the local fishing economy in coastal cities like Hoceima that are historically and culturally tied to the sea.

Similar criticisms of trade and investment agreements with European nations will be heard this week when Morocco hosts the COP 22 conference in Marrakesh. There are questions over the large public debts the government is taking on to finance renewable energy megaprojects. These agreements, critics argue, strip Morocco of its natural wealth in return for foreign investment, leaving the many Mouhcine Fikris out to skirt the law to survive.

Decades after the first French nuclear test in Algeria, thousands of victims are still waiting for compensation. To date only 51 claims have been filed under French legislation ... END_OF_DOCUMENT_TOKEN_TO_BE_REPLACED

Many predominantly Muslim countries have penal laws against "blasphemy", "defamation of religion" and "apostasy". In practice they serve as highly effective weapons to settle ... END_OF_DOCUMENT_TOKEN_TO_BE_REPLACED

Few would have thought that Algeria's Hirak protest movement would still be mobilising the masses 12 months on from its first peaceful demonstration. According to Isabelle ... END_OF_DOCUMENT_TOKEN_TO_BE_REPLACED

Having seen a sharp decline in its influence in Tunisia and Algeria, France is eyeing China and Spain’s growing economic presence in Morocco with concern. Is Paris about to lose ... END_OF_DOCUMENT_TOKEN_TO_BE_REPLACED

At the suggestion of his Arab students, Israeli psychologist Ofer Grosbard created the project "Quranet", which uses texts from the Koran to solve educational problems in schools ... END_OF_DOCUMENT_TOKEN_TO_BE_REPLACED

Libyans have mixed feelings about the EU. On the one hand, they admire what Europeans have achieved, but on the other, they feel let down. Moutaz and Walid Ali report from Tripoli END_OF_DOCUMENT_TOKEN_TO_BE_REPLACED
Author:
Matthew Greene
Date:
Mail:
Send via mail

END_OF_DOCUMENT_TOKEN_TO_BE_REPLACED
Social media
and networks
Subscribe to our
newsletter