Skip to main content
Unrest in the Arab World

The Battle for Bahrain

The uprising in Manama differs from the recent mass protests that toppled long-time rulers in North Africa. In his essay, Barak Barfi expresses the opinion that sectarianism and the security forces' complete loyalty to the monarchy seriously diminishes the likelihood of peaceful regime change in Bahrain 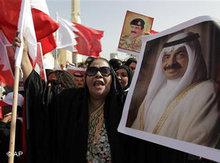 Despite massive protests the Bahraini leadership still enjoys strong support from the security forces – and also from large parts of the populace: Pro-government protesters in Manama

​​ Whereas Tunisia and Egypt are relatively homogeneous countries – Sunni Muslims constitute more than 90 per cent of their inhabitants – Bahrain's Sunnis, including the royal family and the country's political and economic elite, comprise only about one-third of the population. The rest are Shia. Each of these groups is making different, if not contradictory, demands.

The Shia focus on political reforms that would reflect their majority status. Aggrieved Sunnis, however, want socio-economic changes, such as affordable housing. And, whereas Egyptian protesters of all types found common ground in insisting that President Hosni Mubarak resign, Bahrainis will find it almost impossible to agree on a rallying cry.

The ruling al-Khalifa family will not relinquish its power willingly. To preserve itself, the regime relies on imported security forces that are beholden only to the royal family. Drawn from Jordan, Pakistan, and Yemen, they are not reluctant to beat and kill protesters, for they know that any change at the top would mean defeat not only for the al-Khalifas, but for themselves as well. 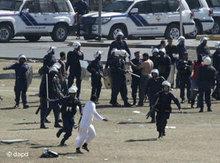 Unlike in Egypt, Bahraini regime critics can not rely on the support of the armed forces. Foreign security squads are cracking down hard on the protesters

​​ Indeed, Bahraini security forces have been ruthless in their attacks against demonstrators, killing six. Given this alignment of forces, and the bloodshed that has already occurred in Manama's Pearl Square, the scenes from Cairo of protesters arm-in-arm with soldiers and hugging tank crews are unlikely to be replayed here.

Moreover, whereas in Egypt, historically a stable country, 18 days of chaos were enough to convince the military to restore order by ousting Mubarak, Bahrainis have greater experience with social unrest than Egyptians or Tunisians do. Political instability is a way of life in Bahrain. From the turmoil in the 1920s, following administrative reforms, to labour protests in the 1950s, the country is accustomed to agitation. As a result, factional strife is unlikely to panic the rulers and is even less likely to persuade them that the king must abdicate to save the country.

The role and influence of the legislature in these three countries also vary. In Tunisia and Egypt, authoritarian regimes allowed no political space for dissenting voices. When Mubarak felt his power was slipping and reached out to his adversaries, he found disorganised opposition parties with little political experience and no support in society. They could not formulate coherent positions and practical demands. Instead, they clung to hard-line positions, leaving Mubarak unable to find a solution to the impasse.

​​ But here in Bahrain, the situation is different. Opposition parties have been active for almost a decade, and have significant representation in the legislature. The leading opposition group, al-Wifaq, has 18 seats in the 40-member parliament. In talks with the opposition, the monarchy will find seasoned politicians ready to bargain over long-held demands. And, with widespread support among its constituents, al-Wifaq can do much to reduce tensions.

King Hamad has a number of other options available to him. Because citizens have so many grievances, he can do much to placate them. He can address Shia claims of discrimination by offering them more jobs in government ministries. He can promise to invest state funds in their run-down communities. He can mollify both Shia and Sunnis by granting them affordable housing.

He can appease both factions by ending a naturalisation policy that confers citizenship on foreign-born Sunnis, eroding the Shia majority. And he can dismiss the prime minister, Khalifa bin Salman al-Khalifa, who has exhausted many on both sides of the sectarian divide during his 40 years in power.

In short, Bahrain's rulers have many cards to play – and the international response to the uprising seems likely to strengthen the regime further. Bahrain is, after all, a key American ally, hosting the United States Navy's Fifth Fleet, which patrols the Persian Gulf and keeps Iran in check. While the US has urged the Bahraini government to rein in its security forces, it is evidently unwilling to press for regime change. Keeping its naval bases will be a top US priority – one that will ultimately shape its response to the situation in Bahrain.

Saudi Arabia, too, can be expected to do everything in its power to prevent the al-Khalifas' fall. Bahrain is the kingdom's most loyal ally in the region, and the Saudis fear that sectarian unrest could spread to the country's eastern region, where a Shia-minority nurses long-held grievances. For years, the Saudis have propped up the Bahraini regime by providing free oil and funding its budget. When unrest erupted, Saudi Arabia reportedly dispatched military units to bolster Bahrain's paltry armed forces.

Change may be coming to much of the Middle East. But with Bahrain's social fault lines too wide to bridge, the regime willing to resort to brutal violence to crush any uprising, and the international community prepared to look the other way, the protesters in Manama should be prepared for defeat.

Barak Barfi is a research fellow with the New America Foundation.

Unrest in Bahrain
"We are all Bahrainis; Not Sunnis, Not Shiites!"
Relations between the opposition and the government, which is under the control of the Sunni royal family, continue to deteriorate. There have even been some calls for the overthrow of the monarchy. Sabine Damir-Geilsdorf investigates the historical roots of the uprising

Madawi al-Rasheed is one of a group of Saudi exiles responsible for founding NAAS – the National Assembly Party. Set up on Saudi National Day in September, it is the first ever ... END_OF_DOCUMENT_TOKEN_TO_BE_REPLACED

In the Arab world, freedom of opinion collides with a societal juggernaut that silences imagination with remarkable efficiency. Egyptian author and novelist Khaled al-Khamissi ... END_OF_DOCUMENT_TOKEN_TO_BE_REPLACED

This 11 September marked the nineteenth anniversary of the terrorist attacks in New York and Washington. The wide-ranging repercussions of those attacks in the years since 2001 ... END_OF_DOCUMENT_TOKEN_TO_BE_REPLACED

The rise of liberation movements in the Arab World during the 20th century brought with them an array of complimentary works from the creative sector. Sultan Sooud Al Qassemi ... END_OF_DOCUMENT_TOKEN_TO_BE_REPLACED

Thousands of migrant workers from Africa are currently living in degrading conditions in detention centres in Arab countries. A human rights organisation has accused the Gulf ... END_OF_DOCUMENT_TOKEN_TO_BE_REPLACED

Is he a reformer, a despot, or both? Ben Hubbard's detailed biography explores Mohammed bin Salman's style of rule – even though he has not yet acceded to the Saudi throne. Moritz ... END_OF_DOCUMENT_TOKEN_TO_BE_REPLACED
Date:
Mail:
Send via mail

END_OF_DOCUMENT_TOKEN_TO_BE_REPLACED
Social media
and networks
Subscribe to our
newsletter