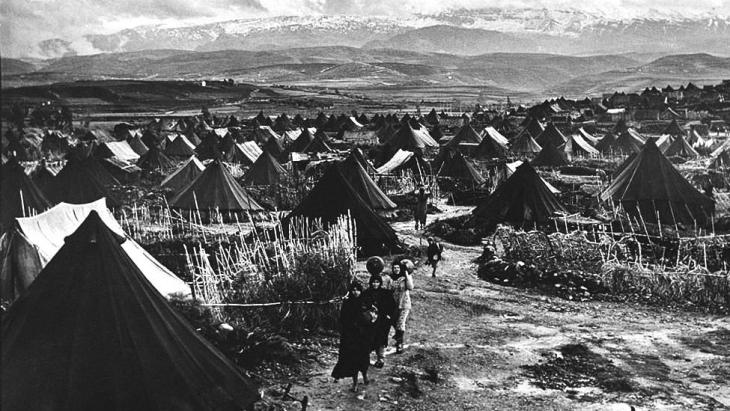 The United Nations Relief and Works Agency for Palestine Refugees (UNRWA) recently opened a photo and video exhibition on the history of Palestinian refugees since 1948 in East Jerusalem. By Joseph Croitoru

An UNRWA exhibition entitled "The Long Journey", which documents the history of Palestinian refugees since 1948, is causing something of a sensation. It is currently being shown in the Al-Ma'mal Palestinian cultural centre in the Old City of Jerusalem and consists of a small selection of exhibits from the huge UNRWA archive.

The show was conceived as a touring exhibition to be displayed both in some of the Arab countries where Palestinian refugees live and in the West. It is part of a larger project, which also includes the step-by-step digitalisation of the archive and its being made available on the Internet.

The media archive of the UNRWA, which has since become part of the UNESCO "Memory of the World" programme, consists of more than half-a-million objects, including photographic prints, videos on VHS cassettes and numerous negatives and slides.

Similar to the Palestinian refugees themselves, the history of the archive is eventful. Until 1982, it was located in Beirut, but as a result of the Israeli invasion of Lebanon in that year, it was moved to Vienna. In 1999, the majority of the collection was moved again, this time to Amman, Jordan. Some 50,000 photographs and negatives found their way to Gaza. Due to the periodic armed conflicts between the governing Islamist Hamas movement and the Israeli army, the management of the agency became increasingly concerned about the safety of the archive material. For this reason – and because of the threat of deterioration due to age – the decision was made to digitalise the collection.

The almost one hundred photos, as well as a number of videos, which for the most part illustrate the first phase of the refugee saga after 1948, have been carefully chosen. The organisation, which clearly does not seek to cause controversy, but rather aims for a historically accurate documentation of events, appears to have avoided depictions of violence on principle.

Most of the photos on display are group photographs, such as those of traditionally attired Palestinian mothers with their young children, of pupils and of men at work. There are also a number of individual portraits. The theme of most of the images is the care and support of the refugees.

Thorn in the side of the Israeli government

The modest exhibition does not seem particularly political, even though a UN representative stressed at the opening that Palestinian refugees have not only a past, but also a future and the right to a life of dignity.

Nonetheless, the exhibition is a thorn in the side of the Israeli government. A spokesman for the Israeli Foreign Ministry accused the UN of only making such a great effort because the subject deals with Palestinians and of unnecessarily spending its funds on the exhibition project, which could have been otherwise better spent, such as on the truly needy.

The UNRWA rejected these accusations and stressed that the funding for the exhibition and digitalisation project, estimated to cost around US$1 million, did not come from its own budget, but was provided by the Danish and French governments and the Palestinian private sector.

Fight over the narrative?

The objections of the rightist Israeli government, however, should be seen in a wider context. In recent years, right-wing circles in Israel have repeatedly attempted to discredit the educational work of the UN refugee agency, accusing it of systematically inculcating Palestinian children with the idea of a return, something all Israeli governments have categorically rejected to date.

The Israeli media, by contrast, has reported favourably on the exhibition, although with mixed feelings. The news portal "Ynet", for example, published a story with the dramatic headline "Fight over the narrative", yet at the same time presented its readers with a considerable number of photos from the exhibition.

It is possible to write about the Holocaust and the crimes of colonial powers without downplaying anything. In her latest book, Charlotte Wiedemann focuses on the numerous blind ... END_OF_DOCUMENT_TOKEN_TO_BE_REPLACED

The Palestinian militant organisation Hamas, with Hezbollah's help, is building up a military presence in Lebanon, the ultimate consequences of which could be devastating, writes ... END_OF_DOCUMENT_TOKEN_TO_BE_REPLACED

With his fist bump greeting for a man he previously called a pariah, US President Biden has paved the way for Saudi Crown Prince Mohammed bin Salman's return to the international ... END_OF_DOCUMENT_TOKEN_TO_BE_REPLACED

Asked about the Shoah, Palestinians often bring up the Nakba, the displacement of Palestinians associated with the founding of the state of Israel. An Israeli Holocaust researcher ... END_OF_DOCUMENT_TOKEN_TO_BE_REPLACED

Foresight is needed to turn the tide of German policy. Being independent of Russia must not lead to dependence on authoritarian regimes in the Middle East. By Kristin Helberg END_OF_DOCUMENT_TOKEN_TO_BE_REPLACED

For many years, world-famous conductor Zubin Mehta has worked tirelessly to strengthen relations between Arabs and Jews, sponsoring projects such as "Road to Recovery", which is ... END_OF_DOCUMENT_TOKEN_TO_BE_REPLACED
Author:
Joseph Croitoru
Date:
Mail:
Send via mail

END_OF_DOCUMENT_TOKEN_TO_BE_REPLACED
Social media
and networks
Subscribe to our
newsletter