Kyrgyzstan's interim government and its leader, Roza Otunbayeva, are firmly in the saddle after the recent overthrow of the authoritarian president, Kurmanbek Bakiyev. But where to now for the Central Asian country after the changeover of power in Bishkek? Edda Schlager provides some answers 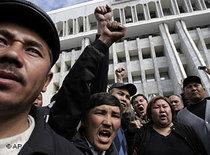 Quo vadis Kyrgyzstan? Will the country shift the focus of its foreign policy to Russia under Roza Otunbayeva's interim government?

​​Ever since the so-called "Tulip Revolution" of 2005, the people of Kyrgyzstan have taken to the streets every spring. People had almost got used to both the protests themselves and their cause: the people's dissatisfaction with the Kyrgyz government under Kurmanbek Bakiyev.

The now ousted president was himself swept to power by the peaceful revolution, which deposed his predecessor, Askar Akayev. Back then, Bakiyev carried the hopes of a nation for a more democratic future. But five years of his presidency brought disillusionment. Above all, his re-election last summer dispelled any last remaining illusions.

With the help of his family, Bakiyev consolidated his power structure. For example, the newly founded Agency for Innovation, Investment, and Development was put under the control of Bakiyev's son Maxim and was tasked with the management of all foreign aid and investment coming into the country.

Targeting his own people

That being said, no-one was prepared for what happened on April 7 and in the days that followed: Bakiyev opened fire on his own people.

But the demonstrators in the centre of the capital, Bishkek, were not about to be deterred. They overwhelmed the president's armed guard with their sheer rage. After one night, which ended with plundering and destruction, they triumphed. Bakiyev fled to his native city of Jalalabad in the south of the country. 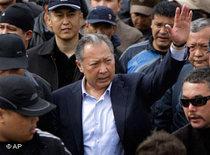 With his back against the wall: Kurmanbek Bakiyev fled to the south of the country in the wake of the uprising in the capital. According to the OSCE, he has since left the country for Kazakhstan

​​By the end of the bloody uprising, over 80 people were dead and over 1,500 injured. More than anyone else, the uprising shocked those who had believed in the peaceful democracy movement in Kyrgyzstan.

Nevertheless, the Kyrgyz people showed that they were not willing to accept everything. Only the month before, on the occasion of the fifth anniversary of the Tulip Revolution on March 24, there had been demonstrations in Bishkek against high electricity and gas prices, the increasingly desolate state of the economy, and the fact that the Bakiyev clan was blatantly lining its own pockets.

Nevertheless, observers are doubtful that the uprising is an indication of a grass-roots democracy movement. Central Asia expert Beate Eschment has this to say: "The people in Kyrgyzstan play along with little games that are imposed on them from the outside – elections, for example – because they are used to it from the time of the Soviet Union. But just as they did back then, they do not expect their problems to be solved at an institutional or democratic level, but informally and – if the experience of 2005 is anything to go by – through violence and escalation."

A week after the uprising – a week in which the interim government has set to work under the leadership of Roza Otunbayeva – Bakiyev was still in the country. All that changed on Thursday, April 15, when the former potentate was flown out to Kazakhstan. He had tried unsuccessfully to mobilize supporters in the south of the country.

Bakiyev explained to journalists that he was willing to step down if the new government would guarantee both him and his family immunity. At the moment, it looks as if Bakiyev has pulled it off and will get off scot free. The interim government has decided against arresting him; the official line was that he would not be prosecuted as long as he left the country.

However, people fear that if the situation remains tense, a civil war could break out. Russia in particular has warned of the possibility a number of times; Russian president, Dmitry Medvedev, even sees a risk of Kyrgyzstan becoming a second Afghanistan.

But is not all of this just an intentional tactical move on the part of the Russians to make it seem necessary for them to get more involved in Kyrgyzstan? Kyrgyzstan's relations with Russia cooled significantly under Bakiyev's rule.

In early 2009, Russia put together an aid package worth US$2.15 billion for Kyrgyzstan. Among other things, this money was intended for the development of the Karambata 1 waterworks. In return, Russia expected Bakiyev to finally close the US airbase at Manas International Airport near Bishkek. 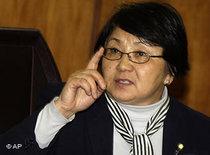 Roza Otunbayeva, the head of the interim government, called on Bakiyev to leave the country in exchange for guarantees of safe passage

​​Manas is an important base for the Americans as they used it to supply their troops stationed in Afghanistan. They still do; Bakiyev did not heed Russia's request. On the contrary, Bakiyev later accepted money from the Americans in exchange for a pledge that he would not close the base.

What will happen to the military base is still unclear at the present time. Otunbayeva has given her assurance that the contracts with the Americans will not be altered. The Americans also assume that this will be the case. Two days after the riots, supply flights to Afghanistan were taking off again from Kyrgyz soil.

This much is clear: Otunbayeva wants to uphold the country's close ties with the United States. At the same time, however, she also wants to improve relations with Russia. On the weekend after assuming power, she turned to Moscow and asked for help.

Russia became the first country to recognise the new government. A government delegation led by interim vice prime minister, Almazbek Atambayev, is currently in Moscow discussing concrete financial plans. It remains to be seen whether the issue of Manas will be raised at these talks.

However, for the time being, Kyrgyz foreign strategy ranks second in importance to the domestic tasks at hand. The top priority is to bring peace to the country. According to Beate Eschment, the divide between the more pro-Russian North and the more strongly Muslim South plays a less important role than often assumed.

"Bakiyev was the first president from the South. The people in the North accepted that in 2005 and even placed their hopes in him." This shows that the divide is not as definite as people think. Moreover, "the South" does not seem to have come out in force in support of Bakiyev.

The interim government has announced that it plans to hold elections in six months. The main task for the new government will be to stabilize the national economy, but above all, to avoid falling prey to the same greed and self-enrichment as others before them have done and to give the people a share.

Analysis F. Stephen Larrabee
Central Asia's Other Turkmenbashis
A dictator's sudden death almost always triggers political instability. But it is doubly dangerous when it poses a risk of region-wide destabilization and a scramble for influence among the world's greatest military powers - the US, Russia, and China, F. Stephen Larrabee argues

Islamic Revival in Kazakhstan
A Pragmatic Islam
Islam is enjoying increasing popularity in Kazakhstan. For many people this represents a return to Kazakh traditions, even if the impetus for the return to their roots has come from abroad. The Kazakh government continues however to promote religious freedom and diversity, and to protect itself against fundamentalist extremism. Edda Schlager reports

END_OF_DOCUMENT_TOKEN_TO_BE_REPLACED
Social media
and networks
Subscribe to our
newsletter