Uprising in Libya
This Is Their Revolution

The number of Libyans injured and killed will continue to rise – Colonel Gaddafi is not a man who gives up. Despite this the West must not use military intervention, which would only put the legitimacy of the protests at risk. Tomas Avenarius comments 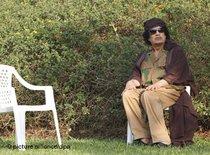 "All the traits of a psychopath": Muammar al-Gaddafi is facing an uprising that cannot be stopped by reforms, writes Tomas Avenarius

​​ The list of sanctions is long, and it came astoundingly quickly, for the UN: the Security Council unanimously imposed a complete arms embargo against Libya. The United Nations' principle organ also issued a travel ban for the dictator Muammar al-Gaddafi, his family and his top henchmen.

Gaddafi's billion-dollar bank accounts have been frozen, as have those of his sons and daughter. Even more importantly, Gaddafi will have to face the International Court of Justice in The Hague.

The Libyan dictator has used extreme brutality against the peaceful protest movement – jets, helicopters, tanks and anti-aircraft artillery against unarmed demonstrators calling for freedom. Should Colonel Gaddafi survive the gradually emerging end of this revolution, he will spend the rest of his life in a European prison cell or end up hanging from a Libyan gallows.

The question of whether the international community has once again waited too long to turn its back on one of the Arab world's best known autocrats is just as justified as it is pointless.

Oil is thicker than blood

The heads of state and government, the business leaders and the UN Secretary General knew all along which means Gaddafi used to rule over the not even six million Libyans. But the country has oil. And oil has always been thicker than blood when dealing with the kings, emirs and colonels of the Arab world.

The people of Tobruk, Bengasi and Tripoli do not want help from outside – they began their uprising against the "Brother Leader" on their own and they have to end it under their own steam, Avenarius says

​​ The more promising subject for Libya than retrospective debates on the lack of moral fortitude in the West is the country's own future: the people have risen up against the "Brother Leader" who has been ruling them for 42 years. They are on the way to winning their revolution.

Libyans have the chance to build a democratic society that can protect human and civil rights in their own country better than the business interests of the Western states and their oil companies ever will. Self-determination rather than dependence on the goodwill of others is the prize the Libyans stand to win.

The decisive factor is that the international community does not intervene on a military level in the battles between the remains of the regime and the opposition across the country. Gaddafi's people began their uprising alone. They must end it under their own steam. The Libyans have already paid a high price. The blood toll will continue to rise and the world will find it difficult to look on from the sidelines – the colonel in Tripoli is not a man who gives up.

He will set his last contingent on the insurgents, have his mercenaries and loyal soldiers continue shooting. Yet one thing is for sure: if NATO jets were to bomb Gaddafi's militia now, the revolution would lose all legitimacy. The people of Tobruk, Bengasi and Tripoli do not want help from outside. The major industrial states have long since ruined their reputation there.

The heads of state and government, the foreign ministers and CEOs – they have all taken tea in Gaddafi's Bedouin tent. They listened obediently to the vain dictator's confused speeches, and in return he signed profitable contracts afterwards. Germany's chancellor Gerhard Schröder was there, Italy's Silvio Berlusconi, French, Americans and Chinese.

A wolf to watch the sheep 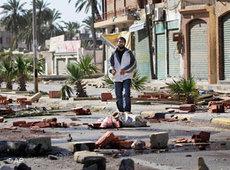 "Libyans have the chance to build a democratic society that can protect human and civil rights in their own country better than the business interests of the Western states and their oil companies ever will": A man walks through roadblocks made by residents in Tripoli, 26 February

​​The United Nations accepted Libya onto its Human Rights Council, setting a wolf to watch the sheep. Only few nations were troubled by the move. Gaddafi's son Saif al-Islam, meanwhile, travelled around the world posing as Libya's great reformer, gaining a British doctorate. Germany was another of his ports of call. Now the son has revealed his true face as the mirror image of his father: an arrogant, brutal dictator-in-waiting.

In Libya itself, nothing has been decided. Gaddafi Senior, who bears all the traits of a psychopath, did not know which way to turn even before the UN sanctions. He is facing an uprising that cannot be stopped by reforms. In the wake of the orgy of violence, the Libyans have a clear demand: the end of Gaddafi. The bloodhound can only continue to fight his own people. Only part of the country is still under his control. He can regain power or be doomed. Escape and exile, a peaceful dotage with his fellow travellers in Venezuela or Bolivia, is no longer an option.

But Gaddafi is still in command of his militia and has no scruples about deploying them. Anyone who doubts this need only recall his past record: In 1996 he had 1200 dissidents murdered – on a single day. And when this latest revolt began, he ordered his soldiers to shoot on the very first day. The "Brother Leader" has nothing in his repertoire other than violence.

The inventor of the "Third Universal Theory" may be a crazed megalomaniac or a cynical Machiavellian; what he has always been is a realist. His only choice now is between dying in his palace, execution after trial in a Libyan court or at best a prison cell in The Hague. Judging by the dictator's previous record, he is likely to opt for the palace, for the battle down to the very last bullet.

The EU and Libya
Europe Should Take a Stand against the Gaddafi Regime
After the successful uprisings in Egypt and Tunisia, the people of Libya are now also trying to free themselves from totalitarian rule. Ute Schaeffer considers how Europe should respond to this movement

European Arms Exports to North Africa and the Middle East
Doing Big Business with Gaddafi & Co.
Could Libyan leader Muammar Gaddafi be using weapons produced in Europe to crush the revolt against his regime? As governments grapple with this uncomfortable question, a new report details brisk weapons sales by EU states to Libya. Sonia Phalnikar reports

The Role of the Libyan Military
The Threat of Civil War
As Libyan leader Muammar Gaddafi fights to crush a popular uprising and maintain his grip on power, experts say that Libya's faction-riddled military is unlikely to play the stabilising role its Tunisian or Egyptian counterparts did. Sonia Phalnikar reports

The southern shores of the Mediterranean Sea are losing sand faster than almost anywhere else. The ecological and economic damage is immense. The good news is, there are ways to ... END_OF_DOCUMENT_TOKEN_TO_BE_REPLACED

A ceasefire has been in effect in Libya for the past year and a half. Yet after Russia's attack on Ukraine, another proxy war looms in Africa's most oil-rich country. Mirco ... END_OF_DOCUMENT_TOKEN_TO_BE_REPLACED

Libya's first-ever skate park opened at the end of May in downtown Tripoli to the delight of local youngsters. Built on a site once used by former dictator Muammar Gaddafi's ... END_OF_DOCUMENT_TOKEN_TO_BE_REPLACED

United Arab Emirates strongman Sheikh Mohammed bin Zayed al-Nahyan, who was formally elected president on 14 May, has led a realignment of the Middle East, creating a new anti- ... END_OF_DOCUMENT_TOKEN_TO_BE_REPLACED

Russia's ranking on the World Press Freedom Index has fallen again over the Kremlin's wartime censorship of the Ukraine conflict. From Myanmar to Mexico, journalists continue to ... END_OF_DOCUMENT_TOKEN_TO_BE_REPLACED
Date:
Mail:
Send via mail

END_OF_DOCUMENT_TOKEN_TO_BE_REPLACED
Social media
and networks
Subscribe to our
newsletter