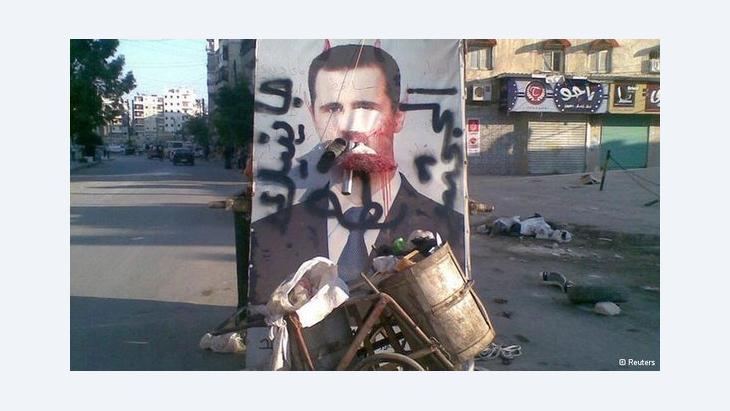 ﻿Zero hour may not yet have arrived for the Syrian regime, but the sense of security in Damascus is fractured and illusory, and the misguided responses of the regime are causing fear and apprehension among the people, writes Fawwaz Haddad from Damascus in his essay

﻿Almost one and a half years of turbulence and upheaval, full of surprising twists and turns, have passed since protests began in Syria, yet neither the Arab nor the global diplomatic world has managed to find a political solution to the crisis. Much time and many opportunities have been allowed to slip by, and still the international community has found no solution to the Syrian crisis.

The uprising began peacefully, and despite all the setbacks, disappointments and fading hopes, has managed to preserve its peaceful character, with demonstrations continuing on a daily basis. On Fridays in particular, the number of these demonstrations tends to increase significantly, particularly in connection with rallies and gatherings to mourn the dead, where songs are sung and slogans chanted calling for the overthrow of the regime.

In contrast to this, attempts by the authorities to crush the peaceful movement by employing snipers and mass arrests have failed, despite the dozens, sometimes hundreds, of victims, including women and children that such tactics claim on a daily basis. The inevitable consequence of this strategy of violence has been the militarization of the uprising.

The Free Syrian Army (FSA) was formed to protect the demonstrators. It grew rapidly due to the desertion of soldiers from the government army, a practice that has now become a mass phenomenon among officers of all ranks. Entire units and companies have joined forces with the Free Syrian Army to take on government troops in Rastan, Homs, Talbisah, Qusair, Idlib, Daraa, Duma, Zabadani, Hama und Deir ez-Zor and most recently in Aleppo and Damascus. The rebels have succeeded in bringing military bases, towns and villages under their control as well as in seizing large quantities of weapons. 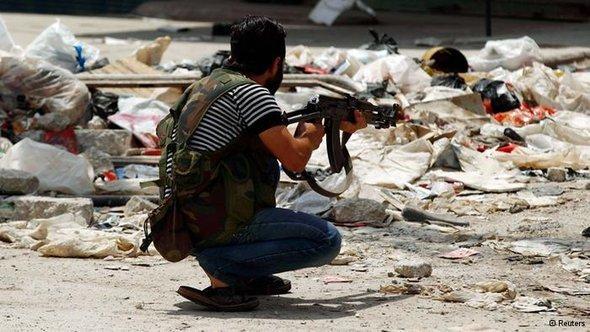 Although the Syrian capital is still under the control of Assad forces, the Free Syrian Army has made forays into the city centre, signalling the start of the final battle for Damascus and, consequently, control of the country

Many believe that ultimately it will be what happens in Damascus that will decide the outcome of the fighting that is going on throughout the country, even if taking Damascus will be extremely difficult. The capital is still firmly under the control of the brutal regime and here too, are the heavily guarded weapons stores of the security forces. Given the fact that small units of the FSA have already penetrated into central Damascus on numerous occasions, engaging the government forces in a decisive battle in Damascus is certainly not out of the question. Were such a battle to come to pass, the FSA could count on substantial support from the Damascus area where many people have supported the uprising from the beginning and have helped officers and soldiers to desert.

Like other Syrian cities, Damascus showed its opposition to the regime from an early stage. Here too, protests are not a recent phenomenon, although they tend to be on a smaller scale than might be expected for the size of the city. Young people from Damascus, however, have joined demonstrations in the surrounding areas; they have also accompanied funeral processions in suburbs such as Duma, Qaboun, Qadam, Harasta and Djobar.

Symbolic protests have been made by young men and women rallying to the call to "Stop the killing. We want to build a country for all Syrians". In doing so, they run the risk of being arrested. Campaign-type slogans have been sprayed onto house walls, and spontaneous, so-called flying demonstrations have been organized – a familiar sight now on the streets of Damascus.

Demonstrators also took to the streets after Friday prayers, ignoring the barriers set up outside the mosques. These were often followed by clashes in some of the poorer quarters of the city, areas such as Rukn al-Din, Muhiddin, Midan, Qabr Atika, Bab Sridje, Mazze and Kafar Susa.

Every demonstrator still runs the risk of being beaten up or even tortured to death. Activists' apartments are raided, offices searched and looted. Hundreds of university students have also fallen victim to the brutality of the infamous shabiha gangs. Routinely detained for weeks or months on end, in some cases they did not survive their imprisonment. Today, every city, every town, every village and every district in Syria has its own martyrs, its own coordination council, and its own glorious revolutionary story to tell. 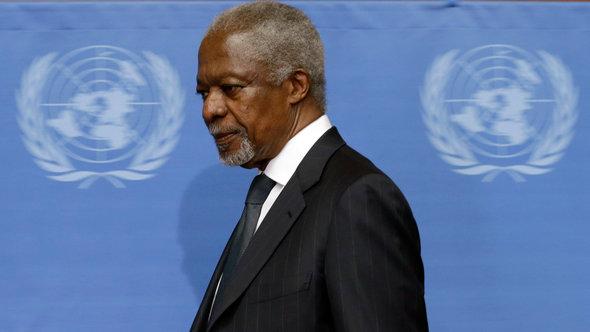 The UN-Arab League joint special envoy to Syria, Kofi Annan, resigned his post on 2 August 2012, accusing the UN Security Council of "finger-pointing and name-calling" and saying that "Syria can still be saved from the worst calamity – if the international community can show the courage and leadership necessary to compromise on their partial interests for the sake of the Syrian people – for the men, women and children who have already suffered far too much."

Security disaster for the regime

Recently, attention has focused more strongly on the capital. In Duma, one of the centres of the protest movement close to Damascus, clashes between armed opposition groups and the army signalled a new and dangerous escalation of the conflict. Hundreds were killed when the town was bombarded by government forces. Most of the residents fled the ruins of what now resembles a miniature version of the battered city of Homs. The same bloody retribution was eventually meted out to most of the settlements around Damascus: Irbin, Zamalka, Muadhamiye, Daraya, Kiswe, Zabadani, Barze and others.

Finally, on 20 July, just before the beginning of Ramadan, a large number of FSA units converged on Damascus from several directions. They were a visible presence in Kafar Susa, Basatin al-Mazze and Midan, from where they were able to launch attacks on government nerve centres such as the offices of the Baath Party, the security forces and the intelligence services. There were also brief skirmishes in the districts of Adawi and Tijara which spread to the area close to the Ibn al-Nafis-hospital. The bloodiest clashes came in the Abu Habl area of Midan, where around 20 people died. In Baghdad Street, close to Sabaa Bahrat Square, a Baath Party building was stormed.

And so, peaceful Damascus, which, at least from a distance, had appeared a tranquil refuge, untouched by the troubles affecting the rest of the country, a place where people could freely go about their daily business, has also moved centre-stage in the conflict. The military activity has turned districts such as Midan, Mazze, al-Hadjar al-Aswad and Tadhamun into warzones.

The presence of the FSA in the heart of Damascus, in places such as Omayad Square or Abbasid Square, threatened government facilities, which were now within the range of the rebel weapons. Four high-ranking officers from the so-called crisis centre were killed by an explosion at the national security HQ. For the security services and the state press, it was another disaster. 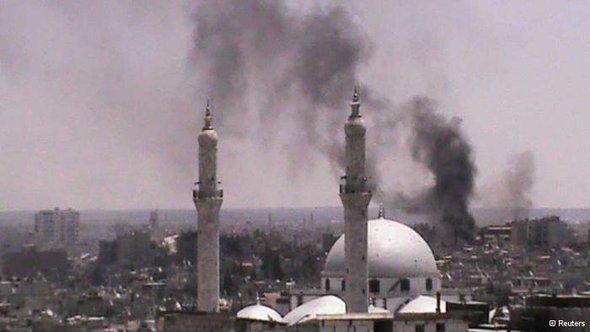 An image of death and destruction in Homs: will Assad's forces destroy the economic city of Aleppo as it did Homs? Hundreds of thousands of Syrians have fled the city, not waiting to find out

Fractured and illusory sense of security

Damascus was thrown into panic. A sense of impending doom descended on the city as word of fighting in Adawi and Sabaa Bahrat Square did the rounds to the accompaniment of gunfire, which could also be heard coming from the directions of the Hamidiye Souk, Nasr Street and Abbasid Square. There was also confirmation of FSA attacks on tanks and military vehicles and of the shooting down of a helicopter over the Qabun district. The Syrian army's reaction was to indiscriminately bombard the city outskirts and suburbs causing many of the residents to flee in panic from areas such as Midan, Tadhamun and Basatin al-Mazze and to take refuge in quieter areas such as Tijara, Qusur, Qassaa and Abbasiyyin.

The regime had been attacked and now, more determinedly defiant than ever, it wanted to eliminate all armed opposition in Damascus. And, although the FSA was neither able to maintain its position nor to advance – they called it a tactical retreat – their offensive had at least served notice of the final battle to come. The regime saw it this way too, unleashing a wave of violence intended to eradicate any resistance and indifferent to civilian casualties. The battle is going to be a long one, and it is to be feared that it will turn into the civil war that the government has often threatened to make it, and to which, through the massacres in Hula, Qubair and Treimse, it has incited the people. There is a real danger of a religious conflict, especially in Damascus, where the various communities and denominations have thus far lived peacefully side by side.

Zero hour has not yet arrived. But the sense of security is fractured and illusory, and the misguided reactions of the regime are causing fear and apprehension among the people. They do not know what to expect;  everyone is aware that anything could happen. The possibility of an indiscriminate bombardment of the old town of Damascus is a horrific prospect to contemplate. After all, the shabiha militia threatened to "destroy Damascus" if need be.

Whether or not the final battle has already begun, it has become conceivable. It may take some time, but it will come. The regime – and with it the international community – is playing for time. When the time comes, the regime will know what to do; but will the community of states know what it has to do? The Syrians already know what they will do: they will bury their dead. In the meantime, the resistance fighters will not be deterred by casualties, even though the victims are no longer mentioned by name, but in terms of numbers.

Initial statements by the Biden administration indicate it will follow a carrot and stick policy towards Turkey. Ankara believes its role in negotiations on various issues could ... END_OF_DOCUMENT_TOKEN_TO_BE_REPLACED

Investigations by German federal prosecutors into the evidence of chemical warfare in Syria are ongoing. Deutsche Welle and Der Spiegel gained exclusive access to witnesses and ... END_OF_DOCUMENT_TOKEN_TO_BE_REPLACED

Relations between Ankara and Paris have reached a new low, with presidential communications contributing to the escalation. To describe recent bilateral exchanges as undiplomatic ... END_OF_DOCUMENT_TOKEN_TO_BE_REPLACED

Saudi Arabia finally congratulated Joe Biden on Sunday over his election victory, more than 24 hours after he defeated Donald Trump, who had close personal ties with Crown Prince ... END_OF_DOCUMENT_TOKEN_TO_BE_REPLACED

Facing the various divergent interests of external players such as Russia, the United States, not to mention Turkey and Iran, the future of northeast Syria remains anything but ... END_OF_DOCUMENT_TOKEN_TO_BE_REPLACED

Fraught with disagreement, relations between the EU and Turkey under Erdogan have rarely been easy. Bearing in mind recent developments, the Union needs to present a clear and ... END_OF_DOCUMENT_TOKEN_TO_BE_REPLACED
Author:
Fawwaz Haddad
Date:
Mail:
Send via mail

END_OF_DOCUMENT_TOKEN_TO_BE_REPLACED
Social media
and networks
Subscribe to our
newsletter