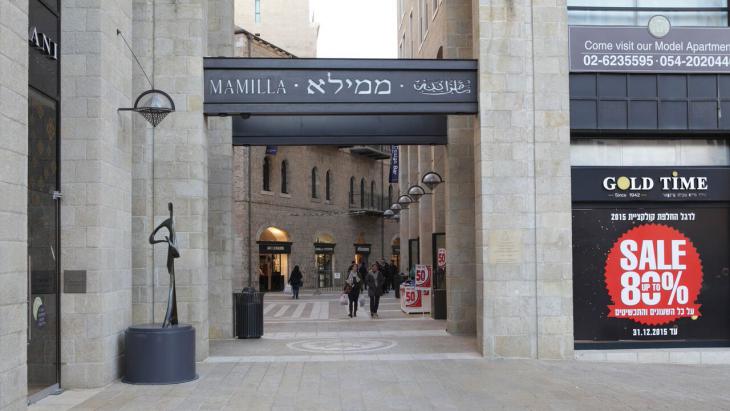 Urban appropriation in Jerusalem
Mamilla and the Tower of David

The Jerusalem district of Mamilla, located between West Jerusalem and the Old City, is an outstanding example of how urban planning decisions alter the public space and create a new visual reality with great political resonance. Felix Koltermann took a look around

There are few cities in the world where the public space is so permeated by political questions and conflicts as Jerusalem. But only a small portion of the phenomena associated with this situation is visible at first glance. Many features are only revealed when you walk through the city with a watchful eye, asking questions and piecing together individual elements of the puzzle.

The collision in Jerusalem occurs between the Jewish-Zionist dream of a united city and Palestinian ambitions to make East Jerusalem including the Old City into their capital, with some devastating effects on the urban geography.

According to international law, Jerusalem consists to this day of two parts: West and East Jerusalem. The city was divided during the first Arab-Israeli war of 1948/49, when Jordan occupied the Old City and neighbouring districts. The ceasefire line, also known as the "green line", ran right through the middle of the city and much of it was a wall.

Around the walls of the Old City in particular extensive areas were designated as no-man's land, providing a buffer zone between the two sides. In the Six Days' War in the year 1967, Israel captured the Old City and occupied it, thereby fulfilling the dream of a united Jewish Jerusalem. Then, in 1980, in a move contrary to international law, Israel annexed East Jerusalem.

Mamilla on the ″green line″

In the west of the Old City, the district of Mamilla extends along the ″green line″ at the upper end of the Valley of Hinnom. It has served a bridging function to the Old City since the beginning of the 20th century. At the time, it was a mixed Jewish-Arab business quarter. It arose as an extension of the narrow and overcrowded souk in the Old City.

Following the war of independence, part of it lay in no-man's land, the other under Israeli control, but within the range of Jordanian snipers. It was home primarily to poor Jewish migrants from the Arab world. After 1967, several very dilapidated buildings were torn down. In the late 1960s, Jerusalem Mayor Teddy Kollek appointed a commission to develop urban planning concepts for the district, in a bid to overcome the division of the city. 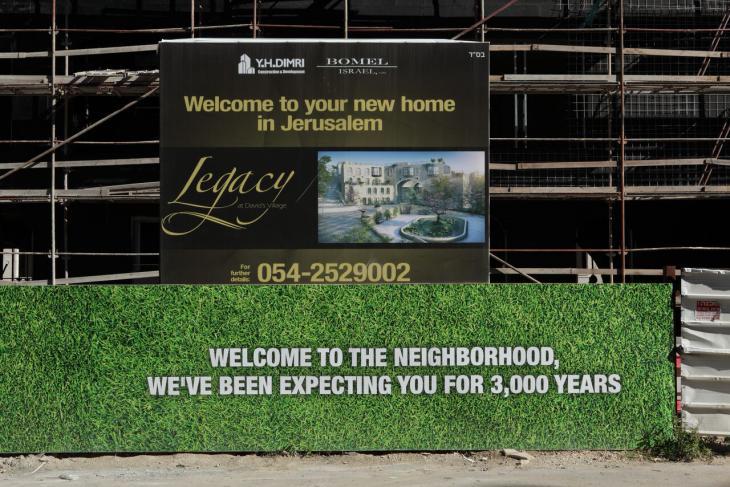 Splendid isolation: The "Legacy" apartment complex on the edge of "David's Village" gated community. Its nouveau riche clientele are guaranteed a peaceful existence. The entire development is under video surveillance, its entrances monitored by security guards

It was the late 1980s before the first projects were realised in the form of high-end apartment complexes. The complexes are aimed at a wealthy foreign clientele and are commonly termed "gated communities": self-contained residential units with private security services and pleasant sounding names like David's Village or Legacy. They stand empty for most of the year and the streets have also earned the tag "ghost town".

Today, Mamilla is also characterised by two other phenomena: the shopping centre Alrov Mamilla and luxury hotels. The shopping mall was opened in 2007 and is an open-air boulevard with international fashion boutiques and fancy shops. Like everywhere else in Jerusalem, all buildings are constructed using Jerusalem stone, a white limestone from the region. Several of the historic buildings, such as the Stern House, were taken down and reassembled stone by stone in a different location. Two newly-built five star hotels, the David Citadel Hotel and the Mamilla Jerusalem Hotel, complete the development.

The myth of David

A key reference point, not just for the district of Mamilla but also for the political-visual new conception of Jerusalem, is a building that goes by the name of the "Tower of David". This name describes a 16th century minaret towering up from the tower of a fortress on the edge of the Old City that dates back to the time of King Herod (1st century B.C.). During the 19th century, the fortress was incorrectly attributed to King David, a mythical figure in Judaism.

On the one hand, the significance of David as a symbol can also be seen in the naming of new projects such as David's Village or the David Citadel Hotel. This is linked to the use of the tower as a visual symbol in the showcasing of projects. On the other hand, the architecture reflects it, as is evident from the directional alignment of the central alleyways of Mamilla towards the tower. In this context, several authors also talk of a "Davidisation" of the city.

One of the most significant effects of the measures introduced around Mamilla is that any sign of a division between East and West Jerusalem has been obliterated from the cityscape. These include the inclusion of the no-man's land and its capitalisation e.g. in the form of the shopping mall and the parking lot that belongs to it. 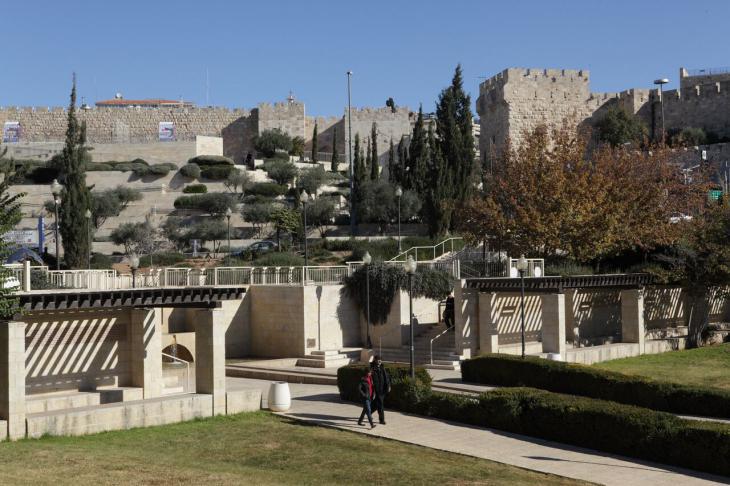 Jerusalem′s "brave new world": view from Teddy Kollek Park across to the walls of the Old City with the towers of Jaffa Gate and the terraces belonging to the Alrov Mamilla shopping mall

According to international law, however, the no-man's land still exists to this day - it can still be found on maps, including Google Maps. This inspired the Israeli artist Guy Briller to carry out a new survey of the no-man's land in year 2011 and make it the object of his discourse. With a group of other artists, he claimed the area, using art installations in the public space to draw attention to its existence and the current political sensitivity of the place.

The way in which the Old City is now visually enclosed – from the western part of the city among other things through the urban planning conception of the district of Mamilla, or the parks that surround the city walls and extend between the wall and the gated communities in the Valley of Hinnom – harks back to Western ideas of an "authentic" Jerusalem.

According to the Israeli professor of architecture Alona Nitzan Shiftan, this reproduces concepts of a "beautiful city", as they exist in the Western modern era. Ultimately, this means the realisation of the Jewish-Zionist dream of a reunited, Jewish Jerusalem. As well as serving to reinvigorate an ethno-national political discourse in Israel, first and foremost this benefits the real estate business focused on luxury properties as well as "Holy Land" tourism, which visits the region in the search for the West′s Jewish-Christian roots.

Furthermore, the phenomena in Jerusalem described here need to be observed in a broader socio-political context, at the heart of which is the Israeli-Palestinian conflict and the economic transformation of Israel.

With regard to the conflict with the Palestinians, according to a study by Dana Hercberg and Chaim Noy, the urban planning measures that can be observed in Jerusalem go hand in hand with a renunciation of a negotiated solution through to a unilateral segregation policy on the part of Israel.

In economic terms, neoliberal practices such as the opening of the property market to foreign capital and the privatisation of public spaces are having inevitable consequences. As to what impact this will have on the social texture of the city in the long term, only time will tell.

In Nathan Englander's novel "kaddish.com", a Jewish man is plagued by feelings of guilt and regret for disregarding the rules of the Kaddish (prayer for the dead) for his deceased ... END_OF_DOCUMENT_TOKEN_TO_BE_REPLACED

Russia is leaving no stone unturned in its attempts to make the Islamic Republic an ally in the war against Ukraine. Fortunately for Vladimir Putin, the mullahs in Tehran are ... END_OF_DOCUMENT_TOKEN_TO_BE_REPLACED

It is possible to write about the Holocaust and the crimes of colonial powers without downplaying anything. In her latest book, Charlotte Wiedemann focuses on the numerous blind ... END_OF_DOCUMENT_TOKEN_TO_BE_REPLACED

The Palestinian militant organisation Hamas, with Hezbollah's help, is building up a military presence in Lebanon, the ultimate consequences of which could be devastating, writes ... END_OF_DOCUMENT_TOKEN_TO_BE_REPLACED

With his fist bump greeting for a man he previously called a pariah, US President Biden has paved the way for Saudi Crown Prince Mohammed bin Salman's return to the international ... END_OF_DOCUMENT_TOKEN_TO_BE_REPLACED

Asked about the Shoah, Palestinians often bring up the Nakba, the displacement of Palestinians associated with the founding of the state of Israel. An Israeli Holocaust researcher ... END_OF_DOCUMENT_TOKEN_TO_BE_REPLACED
Author:
Felix Koltermann
Date:
Mail:
Send via mail

END_OF_DOCUMENT_TOKEN_TO_BE_REPLACED
Social media
and networks
Subscribe to our
newsletter