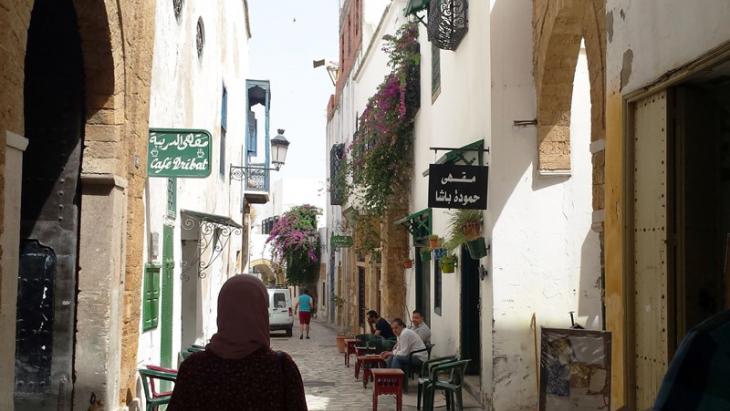 Urban development in Tunisia
Keeping the speculators out of Tunis

While there is a gradual reawakening of interest among the inhabitants of the Tunisian capital in their historical old town, the cityʹs colonial districts are at risk of falling prey to property speculators. Sarah Mersch on the development of Tunis

The narrow streets of the old town of Tunis are thronged. The milling crowds push and squeeze their way between the chairs and tables of the coffee drinkers and the loudspeaker boxes of the street musicians. For some years now, the Medina of Tunis as the cityʹs old quarter is known, has been the place to get together over coffee, tea or a refreshing glass of lemonade when evening falls and the fast-breaking time arrives during Ramadan. The fasting month sees prices for such things rocketing in the Medina of Tunis, until the four weeks have passed and things can return to normal once more.

According to German urban sociologist Raoul Cyril Humpert, who has been living and researching here since 2014, the Medina, the largest of the Arab worldʹs old towns and UNESCO World Heritage Site, becomes an "open-air museum" during Ramadan. "No one actually wants to live there" during the rest of the year, he says. Most of the houses are in a pretty bad state and they are too big for the needs of modern families.

They have lots of rooms grouped around a large central courtyard and are only suitable for use as shared apartments, says Humpert. But with not a lot of money around, the financial means needed to repair the dilapidated houses are lacking. Buyers looking to purchase a house in the Medina these days can expect to spend between 150,000 and 250,000 dinars (around 50,000 - 80,000 euros). But renovating is likely to cost twice that.

Slow re-birth of the old town

When I ask whether the Medina might be in imminent danger of gentrification, Humpert smiles. Tunis, he says, with conviction "is light years away from the sort of changes weʹve seen happening in Marrakesh and Jaffa, the models par excellence for a gentrified Medina." Although there are some foreigners and Tunisians buying up and renovating old houses or opening shops and hotels in the historic old town, it is something that is happening very slowly. 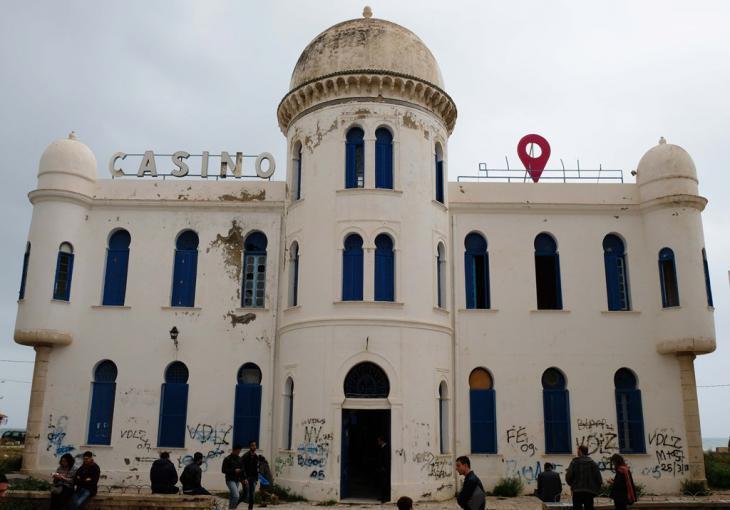 Honing a vision of cultural conservation: architect Emin Turki aims to raise awareness, both among local people and decision-makers, of the historical value of such buildings. In conjunction with the Goethe-Institut, his association is currently organising a series of art and discussion events in historic buildings such as the former Casino of Hammam Lif, a southern suburb of Tunis

At the beginning of the 2000s, the semi-governmental association for the protection of the Medina of Tunis (Association de sauvegarde de la medina de Tunis – ASM), began renovating some streets around the Rue du Pacha area in the northern part of the old city. "Only recently, almost twenty years later, have prices begun to rise a little,” says Humpert. The high number of empty properties in the area, however, shows that so far there is no sign of the resident population being squeezed out, he says. Added to that, the complicated inheritance laws in Tunisia can mean dozens of heirs being involved in a sale agreement and a change of ownership can drag on for years.

When independence arrived in 1956, the population of the Medina was still around 100,000; today that number has plummeted to just 23,000. The so-called Baldiya, the long-established families of the capitalʹs upper classes, moved out to the expensive suburbs by the sea between the 1970s and 1990s. They have been replaced by families of souvenir sellers and lower middle-class families, often from rural areas who have found simple, cheap centrally situated accommodation in the Medina.

The southern, even more socially disadvantaged part of the old town has also seen some renovation in recent years, though only of a rather superficial nature. "The measures carried out by the French development agency (AFD) were predominantly cosmetic," Humpert says. "One often comes across buildings with painted walls and beautifully coloured windows and doors, but behind the facade, the building is a ruin."

The poorly maintained or dilapidated houses constitute a real problem and one that is growing, not only in the old town, but also in the colonial districts that fringe the older area. The Tunisian government recently published a draft proposal intended to protect residents by making it easier to demolish buildings at risk of collapse. There has, however, been massive resistance to the move. Critics fear such a law giving carte blanche to property speculators. 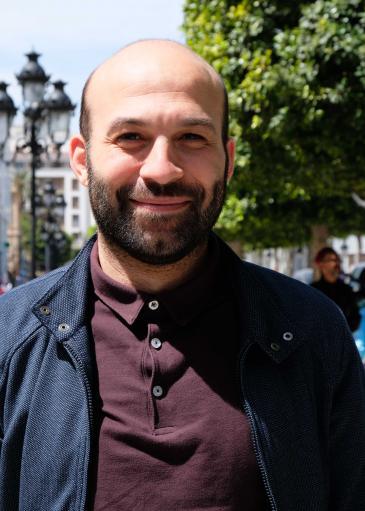 "The government prioritises tourism," criticises Emin Turki, architect and founding member of the association Edifices et Memoires. "But if tourism becomes an end in itself, only the preservation of beautiful facades will matter," says Turki

Architect Emin Turki is a founding member of the association Edifices et Memoires (buildings and memories) and committed to the preservation of historic buildings. He wants to raise awareness, both among local people and decision-makers, of the historical value of such buildings. In conjunction with the Goethe-Institut, his association is currently organising a series of art and discussion events in historic buildings such as the former Casino of Hammam Lif, a southern suburb of Tunis. The building was made accessible to the public especially for the occasion.

The current revival of interest in the Medina is part of a more general return to the traditional that has emerged since the political upheavals of 2011, Turki explains. The colonial districts with their Art Nouveau and Art Deco-influenced buildings have been completely ignored however.

"The government prioritises tourism, but if that becomes an end in itself, only the preservation of beautiful facades will matter."  He is strongly opposed to political or historical attitudes to the colonial period influencing decisions on which buildings should be preserved.

A comprehensive urban development policy is not even on the horizon. The government body responsible for the countryʹs cultural heritage and for decisions on conservation, is interested only buildings of the Arab-Muslim era, he says.

An additional problem is that the government is responsible for meeting half the costs of maintaining and renovating protected buildings, but since 2011 not a single building in the capital has been listed for conservation.

Besides the multiple heirs in the colonial districts of Tunis, there is the not infrequent difficulty of determining ownership. Many buildings are simply not officially registered, others belong to Tunisian Jews or Europeans, who left the country decades ago and cannot be traced.

Turki and Humpert agree that there is little point in depending on state support, which, if it is available at all, then only sporadically so. "We had to wait until 2017 to get public dustbins; it was not until a visit from Franceʹs President Macron that the facades were given a coat of paint," the urban sociologist recalls. Those involved in the cultural sector, he says, have had a far greater impact than the state when it comes to improving the image of the old town, or making people aware of the need to preserve and value their historical buildings.

Charting his own descent into extremism, former Moroccan jihadist Adil El Hasani reveals how he was ultimately able to extricate himself from the grasp of those peddling religious ... END_OF_DOCUMENT_TOKEN_TO_BE_REPLACED

The history of Jews and Muslims is far more entangled than you might imagine – but you have to listen out for it. In "Recording History", Christopher Silver takes us on a sonic ... END_OF_DOCUMENT_TOKEN_TO_BE_REPLACED

Welcome to the world of Al Qasar, where Arabic music collides head-on with punk and psychedelic to create something powerful and beautiful. "Who Are We" is a raucous, subversive ... END_OF_DOCUMENT_TOKEN_TO_BE_REPLACED

A conflict rooted in identity is currently gaining traction in Morocco. It began with demands to relieve the "burden" of Fusha (classical Arabic) by implementing a linguistic ' ... END_OF_DOCUMENT_TOKEN_TO_BE_REPLACED

The Women's Africa Cup this year in Morocco was a resounding success. The Moroccan team was the first Arab women's football team to qualify for a World Cup. By John Duerden END_OF_DOCUMENT_TOKEN_TO_BE_REPLACED

The southern shores of the Mediterranean Sea are losing sand faster than almost anywhere else. The ecological and economic damage is immense. The good news is, there are ways to ... END_OF_DOCUMENT_TOKEN_TO_BE_REPLACED
Author:
Sarah Mersch
Date:
Mail:
Send via mail

END_OF_DOCUMENT_TOKEN_TO_BE_REPLACED
Social media
and networks
Subscribe to our
newsletter