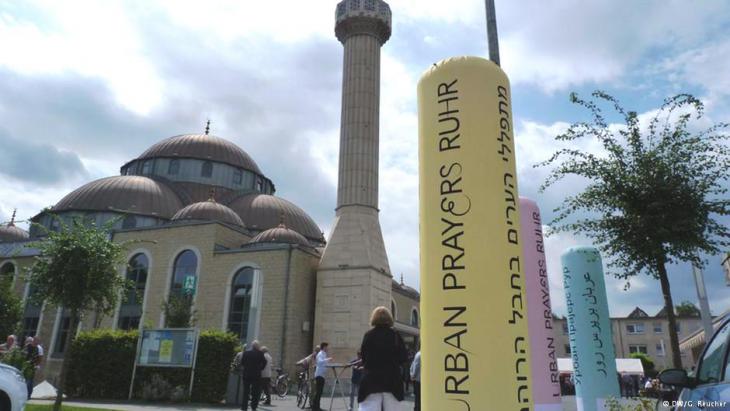 What do people believe in? What is their language of prayer? Which churches, prayer rooms, mosques or temples do they attend? The interfaith theatre project ″Urban Prayers″ posed these and other tough questions – in six different places of worship throughout Germany′s Ruhr region. By Gaby Reucher

Even the reception at the entrance of the DITIB Merkez Mosque in the Marxloh district of Duisburg was rather unusual. Young women holding bottles of disinfectant welcomed the visitors. "That's for our guests so they can clean their hands. Then they'll also be given some sweets," explained a friendly woman from the mosque. My hands now smelt of lemon.

With room for 1,200 people, the mosque in Marxloh is one of Germany's largest. The location once housed the cafeteria for a mining plant, but was turned into a house of prayer and meeting place in 2008. In contrast to other German cities, the construction of a mosque in Marxloh was not accompanied by protests.

Merkez Mosque – a place of dialogue

The mosque was chosen as an ideal location for Bjorn Bicker′s music theatre project "Urban Prayers", staged by director Johan Simons as part of the Ruhrtriennale, an annual arts festival based in Germany's former industrial heartland, the Ruhr region. The piece is about religious diversity in Germany and poses the fundamental question of what we all believe in.

The project was performed in six different houses of worship representing various religions. Right from the start, Johan Simons insisted on including the Merkez Mosque. "At first, the piece was to be performed in a side room, not in the mosque itself. But the more we talked to people there, the more open-minded they became about it until, finally, they agreed." 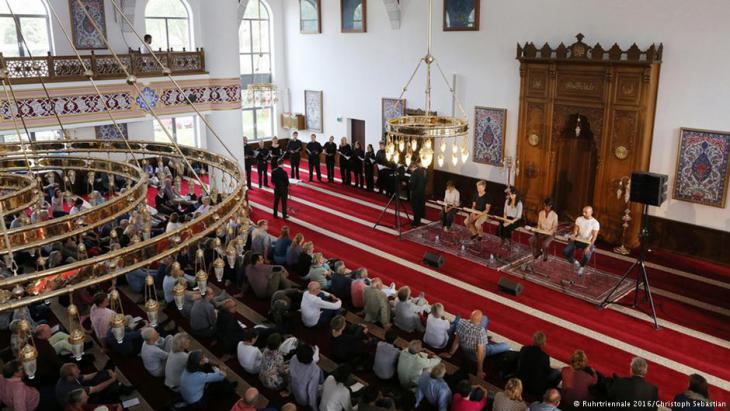 "Urban Prayers" – interfaith and diverse: at the Merkez Mosque in Duisburg, the imam recited verses from the Koran and a dervish whirled; in Dortmund, the Serbian folk dance troupe ″Srbija″ performed and the cantor Tsah sang with his musicians, not to mention the Nodelman Duo, in the synagogue

Just the fact that songs are being sung in a mosque is anything but normal, says Nigar Yardim who works at the Merkez Mosque. "We have been involved in talks for two years and we took a close look at what was going to be performed there," says Yardim.

Meeting each other with respect

All visitors were invited to take off their shoes at the entrance to the elaborately decorated prayer room, before sitting down on a red carpet under a huge golden chandelier. The imam began by reciting suras from the Koran. Five actors then asked questions in a monotonous, staccato style: "What do you think we are, what we believe, where we live?"

The project "Urban Prayers" focuses on topics like prayer, helping each other, compassion, dealing with crime and money and also about different ways of getting married. The various themes were accompanied by the choir "ChorWerkRuhr", a professional vocal ensemble from the Ruhr, which sings songs from different religious traditions. 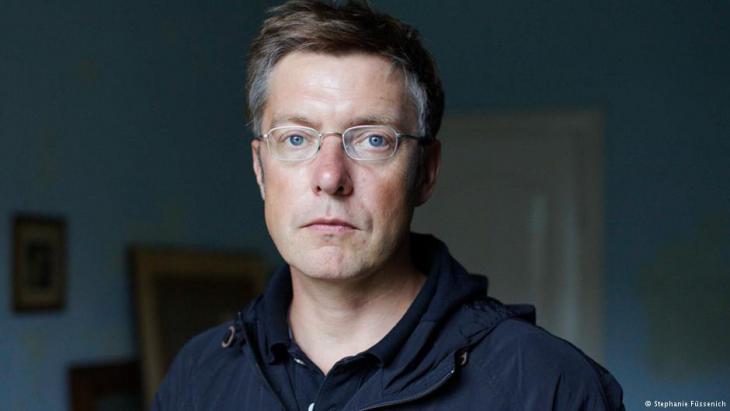 "In terms of art, I'm interested in a kind of exaggeration": playwright Bjorn Bicker has given a lot of thought to issues like migration and immigration. For his project "Urban Prayers," he visited Islamic, Hindu, Jewish and many other religious communities

The choir's director, Florian Helgath, says settling on a particular Christian song was especially challenging. Finally, he opted for the "Kyrie" from Palestrina's "Missa Papae Marcelli." "I tried to take something that would be representative of the Christian faith, without being offensive to non-Christians, like the Last Supper or the crucifixion of Christ," says Helgath.

Speaking with many voices

It's hard to find a common denominator – and that also holds true for the actors and their roles. Are they speaking only for themselves, or for everyone? "Why do you think we wear beards, curl our hair, wear hats, scarves? Why do we say you can keep your shoes on?"

It's the so-called "choir of faithful citizens", inspired by the choirs in ancient Greek tragedies, that speaks in unison during the performance, commenting on the acts of the play. Yet the choir always speaks with different voices.

Playwright Bjorn Bicker has devoted much thought to issues such as migration and immigration. For his project "Urban Prayers," he visited Islamic, Hindu, Jewish and many other religious communities. "In terms of art, I'm interested in exaggeration," said the author, explaining that this is the reason why the "choir of faithful citizens" never finds a common voice. "The choir keeps on permanently contradicting itself. That's what I find interesting, since that is a true image of our society."

These contradictions also indicate wrong directions too, Bjorn Bicker admits. During his research, he came across things that were not compatible with his concept of freedom and democracy. "But vilifying that, while talking about what's good, would not be constructive," he concluded. "As soon as you get to know people, the world becomes more complex," said Bicker. Such conversations also formed the basis for his book "Was glaubt ihr denn" (What do you believe in?), which served as the basis for the theatre piece.

The value of voicing doubts

The viewers never know which of the five actors is speaking for whom. Is he or she playing the role of a Christian, a Muslim or a Serbian-Orthodox Christian? Adding to the confusion is the fact that the actors, in terms of their looks, have various backgrounds, so they can't be put in a box based on appearances. 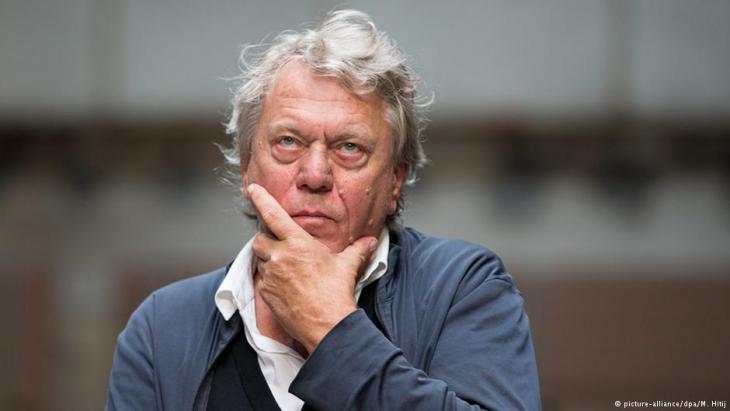 "Many of them have never visited a mosque before," says Johan Simons. That alone, in his view, is a great step forward in terms of dialogue

"What has fascinated me is that there are more questions than answers. That helps to see the world through the eyes of the others," says Nigar Yardim. But it's too bad that so few Turkish people attended the event, she adds. "The text is very difficult, so many Turks have a problem understanding [the German]." "Many of them have never visited a mosque before," says Johan Simons. That alone, in his view, is a great step forward in terms of dialogue.

And in these times of mass migration, Islamist terrorism and right-wing populism, dialogue is important, he adds, since it can help us understand each other, while still remaining loyal to our views and values: values such as freedom, equality and brotherhood.

The Dutchman said he still has doubts about his own values and those of others, even after participating in dialogue. "I originate from a European culture in which doubt is an important commodity. Especially nowadays, I have to show my doubts and talk about them. And that's what I'm doing."

In "Sprache und Sein" (Language and Being) the activist Kubra Gumusay critically examines the function of language – the narratives that reflect and determine the realities of ... END_OF_DOCUMENT_TOKEN_TO_BE_REPLACED

Award-winning Indian author Rahman Abbas spent time in Europe last year researching "the Holocaust and the future of minorities in India and Pakistan". To mark VE Day on 8 May, he ... END_OF_DOCUMENT_TOKEN_TO_BE_REPLACED

A muezzin call to prayer via loudspeaker is legally permissible in principle, but various basic rights and interests must be considered, explains professor of law Mathias Rohe in ... END_OF_DOCUMENT_TOKEN_TO_BE_REPLACED

Repression and despotism takes many forms. Yet as varied as these phenomena are, they all share a common core, argues Tarek Azizeh. Revolutions accompanying the struggle for ... END_OF_DOCUMENT_TOKEN_TO_BE_REPLACED

For the first time anywhere, Syrian intelligence officers are facing trial – in Germany. The court aims to probe the defendant's alleged crimes, as well as cast light on Bashar al ... END_OF_DOCUMENT_TOKEN_TO_BE_REPLACED

The refugee crisis on Turkey's borders can only be resolved with a new EU deal. It should build on the current plan, but avoid its flaws, writes Ozgur Unluhisarcikli of the German ... END_OF_DOCUMENT_TOKEN_TO_BE_REPLACED
Author:
Gaby Reucher
Date:
Mail:
Send via mail

END_OF_DOCUMENT_TOKEN_TO_BE_REPLACED
Social media
and networks
Subscribe to our
newsletter