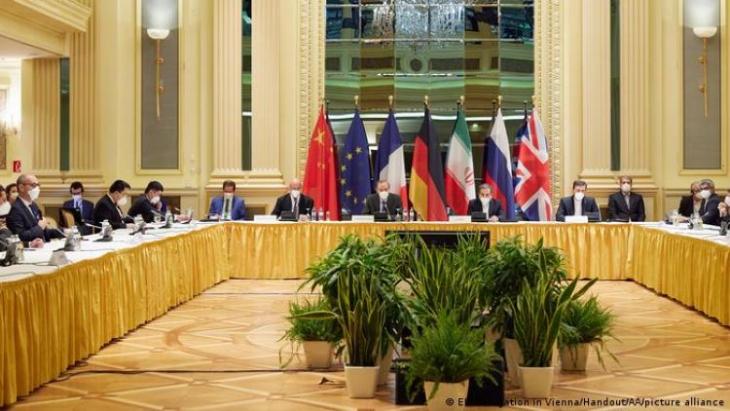 Iran for the first time on Monday said it was open to direct nuclear negotiations with the United States, which declared itself ready to hold talks "urgently" – in a possible turning point in efforts to salvage the 2015 nuclear accord.

Tehran has been engaged since last year in talks with the five other world powers still part of the agreement, which offered sanctions relief in exchange for curbs on its nuclear program.

After unilaterally withdrawing in 2018 under then-president Donald Trump, Washington has been taking part indirectly in the Vienna negotiations, which seek to bring the United States back into the nuclear accord and ensure Iran returns to its commitments.

But Washington has said on multiple occasions it would prefer to hold direct talks, and on Monday Iran's foreign minister said his country would consider doing so if it proved the key to a "good agreement" to salvage the floundering deal.

"If during the negotiation process we get to a point that reaching a good agreement with solid guarantees requires a level of talks with the U.S., we will not ignore that in our work schedule," said Foreign Minister Hossein Amir-Abdollahian.

A U.S. State Department spokesperson reiterated after the Iranian comments that the United States is "prepared to meet directly."

"We have long held the position that it would be more productive to engage with Iran directly, on both JCPOA negotiations and other issues," the spokesperson said, referring to the nuclear deal, known formally as the Joint Comprehensive Plan of Action.

"Given the pace of Iran's nuclear advances, we are almost out of time to reach an understanding on mutual return to full implementation of the JCPOA," the official added.

U.S.-Iran ties have been severed since April 1980, just months after the fall of the shah and the occupation of the American embassy by Islamist students loyal to Ayatollah Ruhollah Khomeini.

Relations worsened significantly after Washington withdrew from the nuclear deal and reimposed biting economic sanctions, prompting Tehran to begin rolling back its own commitments.

Iran has previously stated that the United States must "change course" and return to the nuclear deal, prior to any direct talks.

Iran's supreme leader Ayatollah Ali Khamenei, who has the final say on major issues including the nuclear policy, said earlier this month that negotiating with the 'enemy' does not mean surrendering.

"The bullying of the enemy should not be tolerated," he said, referring to the U.S..

Some analysts had interpreted these remarks as a tacit signal for possible direct talks with the U.S., as was the case in the buildup to the 2015 nuclear accord.

Earlier on Monday, Iran's foreign ministry spokesman said it was "possible" to reach an agreement on both the release of Iranian and U.S. prisoners and the nuclear deal.

"They are two different paths, but if the other party (the U.S.) has the determination, there is the possibility that we reach a reliable and lasting agreement in both of them in the shortest time," spokesman Saeed Khatibzadeh told reporters.

Khatibzadeh's comments came in reaction to remarks made by the U.S. envoy for Iran, Robert Malley, who a day earlier said it was unlikely Washington would strike an agreement on the nuclear deal unless Tehran releases four of its citizens.

The four U.S. citizens are Iranian-American businessman Siamak Namazi, 50, and his father Baquer, 85, as well as environmentalist Morad Tahbaz, 66, and businessman Emad Sharqi, 57.

The two countries have released each other's citizens in the past.    (AFP)

END_OF_DOCUMENT_TOKEN_TO_BE_REPLACED
Social media
and networks
Subscribe to our
newsletter