NATO's deployment grew over the years, eventually involving close to 50 nations. The mission, which had been pitched as one of reconstruction and peace, turned into a combat mission as the Taliban re-grouped and re-armed to wage a full-blown insurgency.

Afghanistan expert Ibraheem Bahiss, who also advises the International Crisis Group, sums it up in one sentence: "Once you have overthrown a force that was ruling over the country and replaced it with a disparate group of actors with diverging priorities and capabilities, seems like there really is very little choice other than to engage in some ways to keep the country from falling apart." 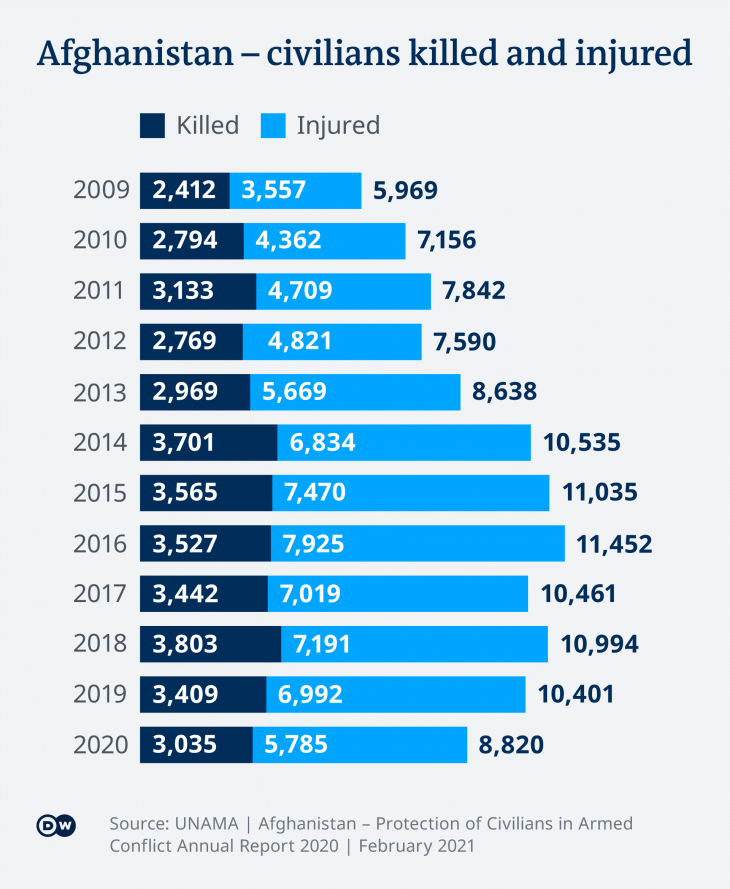 Counting the human cost: according to the UN Assistance Mission to Afghanistan, which has documented the number of civilian casualties since 2009, nearly 111,000 civilians had been killed or injured by the end of 2020. The U.S. Army has lost 2,442 soldiers; the Bundeswehr, 59. In January 2019, President Ashraf Ghani announced at the World Economic Forum in Davos that more than 45,000 members of the Afghan security forces had lost their lives since he took office in 2014

But, after two decades, the U.S. has now decided that Afghanistan, even if it disintegrates, does not pose enough of a global threat to keep boots on the ground. U.S. security interests are focused primarily on an increasingly assertive China.

How many victims have died in this war?

According to the UN Assistance Mission to Afghanistan, which has documented the number of civilian casualties since 2009, nearly 111,000 civilians had been killed or injured by the end of 2020. The Taliban and other extremist groups are responsible for most of the casualties. But international troops have also killed many innocent civilians – especially when attacking villages with fighter jets and drones.

The U.S. Army has lost 2,442 soldiers; the Bundeswehr, 59. It is unknown how many Afghan soldiers and police officers have been killed. That devastating figure has been kept secret for many years out of security concerns. In January 2019, however, President Ashraf Ghani made the surprise announcement at the World Economic Forum in Davos that more than 45,000 members of the Afghan security forces had lost their lives since he took office in 2014.

There is also no reliable information on the number of Taliban fighters and other extremists killed in the conflict. According to calculations by the Costs of War Project at the prestigious Brown University in Rhode Island and judging by current media reports, a figure considerably higher than 50,000 seems very realistic.

What is known about the cost of the war?

Brown University's Costs of War Project has also estimated that the United States spent more than $2 trillion (€1.7 trillion) on the war in Afghanistan from October 2001 through April 2021. About half of this sum, $933 billion, was spent on the U.S. army. 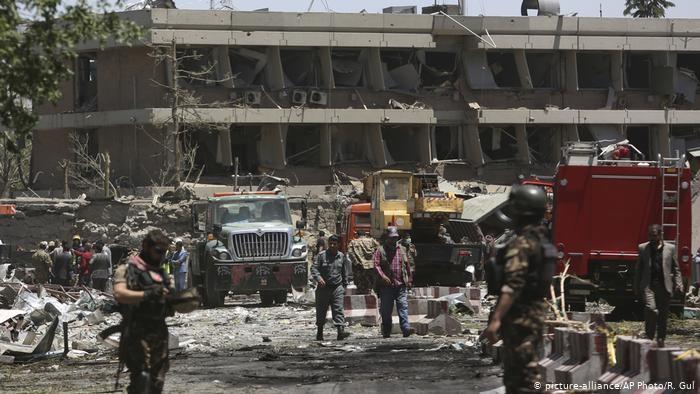 Costs of War Project: "Since invading Afghanistan in 2001, the United States has spent $2.26 trillion on the war, which includes operations in both Afghanistan and Pakistan. This total does not include funds that the United States government is obligated to spend on lifetime care for American veterans of this war, nor does it include future interest payments on money borrowed to fund the war"

According to the White House, the U.S. invested $144 billion in the reconstruction of Afghanistan during the same period. The bulk of this sum, more than $88 billion, went toward the Afghan security forces.

Government sources indicated to DW that Germany spent more than €18 billion on the Afghanistan mission from 2002 through 2020. According to the Defence Ministry, by far the largest share, €12.5 billion, was spent on the Bundeswehr mission.

The German Foreign Ministry has provided civilian support amounting to €2.4 billion since 2001, a spokeswoman revealed. The building of state institutions was supported with about €950 million from 2002 through 2019, she said.

Germany’s electorate includes some 7.4 million citizens with international roots, while many more millions of residents from abroad aren’t allowed to vote. Both groups are often ... END_OF_DOCUMENT_TOKEN_TO_BE_REPLACED

International relations are shifting across the Middle East as regional powers adapt to America's retrenchment and China's growing influence. Although the region could become the ... END_OF_DOCUMENT_TOKEN_TO_BE_REPLACED

A deluge of books, movies, series and cover stories: ever since the events of 9/11, the West has seemed almost manically preoccupied with Islam. Yet this has rarely led to deeper ... END_OF_DOCUMENT_TOKEN_TO_BE_REPLACED

Despite their promises of "moderate" rule, the Taliban have announced the end of mixed classes in universities and a ban on sports for Afghan women. Many are taking the streets to ... END_OF_DOCUMENT_TOKEN_TO_BE_REPLACED

Twenty years after 9/11, the world is faced with the dual challenge of Islamophobia and anti-Westernism. Ahmet Kuru argues that Muslims in the West, well versed in both Western ... END_OF_DOCUMENT_TOKEN_TO_BE_REPLACED
Author:
Sandra Petersmann
Date:
Mail:
Send via mail

END_OF_DOCUMENT_TOKEN_TO_BE_REPLACED
Social media
and networks
Subscribe to our
newsletter