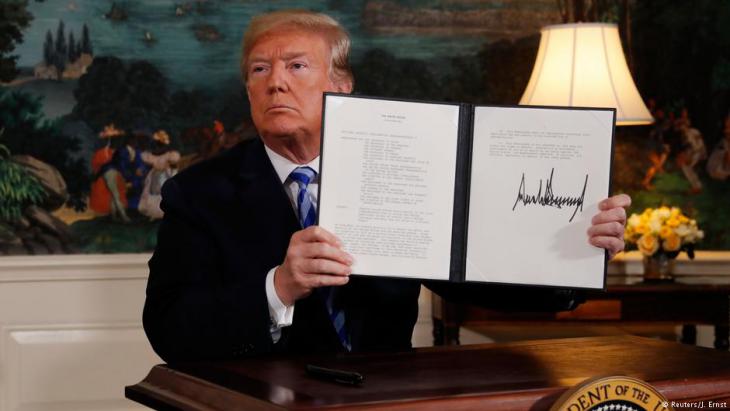 Madmen at the helm

Neither international politics nor the self-healing powers within the United States system of government seem to be able to prevent an American war against Iran. It may now only be the civil societies of Iran and Israel that are still in a position to do this, says Stefan Buchen

There is an unmistakable eagerness for war. As if there werenʹt enough of it already, it seems that the United States can hardly wait to spark another, larger war in the Middle East.

Donald Trump has declared his countryʹs withdrawal from the Iran nuclear pact and the reintroduction of more stringent economic sanctions against his arch enemy. When he had finished his declaration, you could see him being met at the briefing room door by his new security adviser John Bolton.

Bolton, who is now one of the most powerful men in the U.S. administration, appeared at a meeting of the Iranian exile "Peopleʹs Mujahedin" in July 2017. There, he proclaimed the goal of his Iran policy – regime change – to an enthusiastic audience of several thousand. Boltonʹs words were: "The only solution is to change the regime itself. And thatʹs why, before 2019, we here will celebrate in Tehran."

As if the diplomat, who has now moved up to become the presidentʹs National Security Adviser, was embracing Shia numerical mysticism, he said that the Islamic Republic should not live to see its 40th birthday in February 2019. The number 40 has a particular significance in Shia Islam.

To put it bluntly, this is madness. The USA is being ruled by moral degenerates. The very worst of American society has been washed upwards through its institutions. And it is showing its ugly face in the U.S. policy on Iran. Bolton, along with the new Secretary of State Mike Pompeo and Secretary of Defence James Mattis, is pulling the strings of Americaʹs policy on Iran. Trump is just their loudspeaker broadcasting it to the world.

As always, the policies of madmen are based on illusions. The government in Washington believes that new sanctions will intensify the economic and currency crisis in Iran to such a degree that the people will rise up, topple the regime and celebrate the Americans as their saviours.

The United Statesʹ threat, hanging over all of this: if necessary, we will help things along with military intervention. Trumpʹs former security adviser Michael Flynn, a retired general, made no secret of this political logic in his book "Field of Fight".

In 2009, he said, the Obama government neglected to provide military and secret-service support to the wave of protests that were taking place in Iran at that time. If the United States had only mounted a sufficiently robust intervention in the demonstratorsʹ favour then, according to Flynn, "the Mullahs" would not still be governing in Tehran today.

The element of illusion here is evident just from the fact that the Iranian nation does not consist of a few thousand hallucinating "cheering Persians" gathered in Paris, but of nearly 80 million people. A not inconsiderable minority are loyal to the regime. And while the majority may have no love for the "Islamic Republic", they arenʹt hoping for America to get rid of the regime with economic sanctions and war, either. 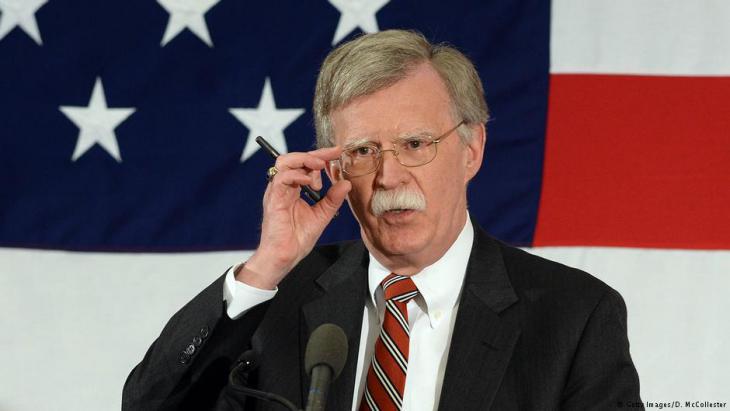 The ultimate hardliner: under the Bush administration, Trumpʹs security adviser John R. Bolton was known for his passionate advocacy of the Iraq invasion. When Bush put Bolton forward for the post of United States ambassador to the United Nations, over 100 U.S. diplomats signed an open letter in opposition. Bolton is one of the leading opponents of the JCPOA with the Islamic Republic and an outspoken supporter of regime change in Iran

The overwhelming majority of Iranians are convinced that this would result in chaos. The Iranian population doesnʹt need government propaganda to know that chaos is already reigning in neighbouring countries where the U.S. has "intervened": Afghanistan, Iraq, Syria and elsewhere.

When faced with the political class now governing in Washington, it is not difficult for "the Mullah" Hassan Rouhani to show his intellectual and moral superiority. In his response to Trumpʹs announcement, the Iranian president reinforced the message that his country would stick to the nuclear agreement and was committed to multilateralism and continued co-operation with the remaining signatories to the deal. The U.S. government, Rouhani said, clearly hadnʹt done its history homework. This showed that the Iranians rejected an American policy of "coup dʹetat and war" against their country.

These days, it is very easy for the rulers of the Islamic Republic to maintain the rhetorical high ground. Whether they can withstand an attack of concentrated American military might is another question. Rouhani pointed out that the "Revolutionary Guard" was in Syria and Yemen – an unprecedentedly clear hint that if push comes to shove, Iran will strike back against American targets and targets of the U.S. allies Saudi Arabia and Israel.

The spectre of a new, larger and more devastating war is thus haunting the Middle East. By comparison, German companiesʹ fears that the U.S. sanctions will stop them being able to invest in Iran seem almost petty and provincial.

The increasingly noisy role of the Israeli government is now impossible to ignore. In his withdrawal statement, Trump made reference to the "proof" that Prime Minister Benjamin Netanyahu presented on the Iranian nuclear programme. The anti-Iran clique in Washington is working hand-in-hand with the government in Jerusalem. A few days ago the Israeli defence minister, Avigdor Lieberman, proclaimed loudly that there were "three problems: Iran, Iran and Iran." He was parroting the words of the American Defence Secretary Jim Mattis, who had said exactly the same thing two years previously. 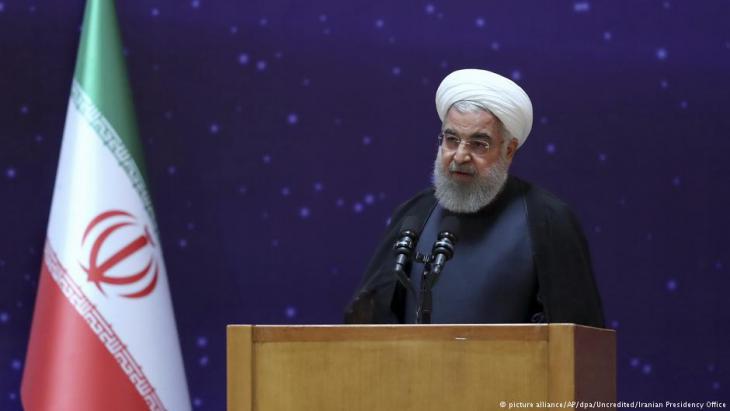 All hope rests on the remaining signatories: President Hassan Rouhani said on Tuesday that Iran would remain committed to the deal without Washington despite Trump's decision to withdraw from it. "If we achieve the deal's goals in co-operation with other members of the deal, it will remain in place," Rouhani said in a televised speech. "I have ordered the foreign ministry to negotiate with the European countries, China and Russia in coming weeks. If at the end of this short period we conclude that we can fully benefit from the JCPOA with the co-operation of all countries, the deal would remain," he said. Rouhani warned that Iran was ready to resume its curbed nuclear activities if Iran's interests were not guaranteed under a deal without the United States

Can the madness be stopped? It will be very difficult. Berlin and Paris may never tire of stressing the nuclear agreementʹs advantages and regretting the "blow" dealt to conventions in international relations, as well as the U.S. governmentʹs "loss of credibility and reliability." But will that prevent a war?

We may place greater hopes in Israeli and Iranian civil society. Both would suffer most from a new war. On the one hand, people in Israel are fearful of Iran – and with good reason. But this fear has been systematically stoked by a succession of Israeli governments over 20 years, beyond all reasonable measure.

Netanyahuʹs stage show was the provisional high point here (or low point, from an aesthetic point of view). But on the other hand, many Israelis mistrust Netanyahu and Lieberman. They hold them responsible for the offence of working with Trumpʹs clique to draw them into a dangerous and unnecessary war. Will they take to the streets in protest against this? That would certainly make an impression.

Not giving the other side any pretext for war

Something similar applies to Iranian civil society. They must succeed in making it clear to the government that the majority of the population does not want them to provoke or needle the other side in a way that might provide them with a pretext for war. This fact is well known to everyone involved. Itʹs just that these days, you canʹt repeat it often enough.

The biblical "prince of peace", the "sar-shalom", the saviour whose coming the prophets foretold, has both a Persian and a Hebrew linguistic element. The situation is so desperate that a reference to the lexical construction of this old term may not be entirely superfluous.

A more urgent thought, however, is that Israeli and Iranian societies are fundamentally very similar. This is where the tragic absurdity of the situation lies. But it also provides a grain of hope. Both nations have developed a living culture that rests on similar values: the will to create, to make art, the recognition that "man does not live by bread alone" are widespread in both countries. And so is the urge to stay abreast of modern developments and to seek scientific progress. And the social significance of education and the idea that "the children should have a good future." 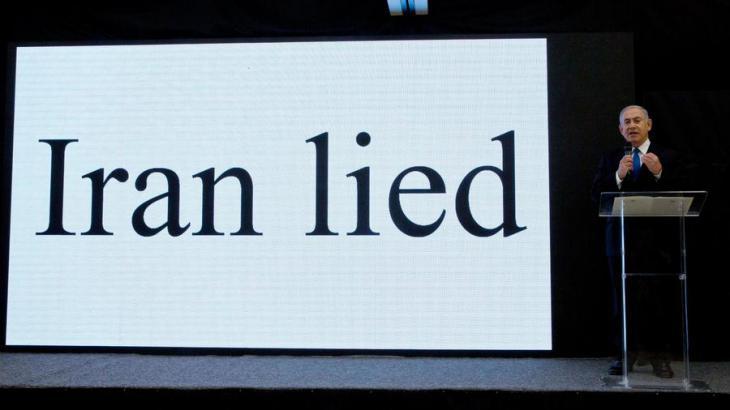 Farcical scare-mongering: Israelʹs Prime Minister Netanyahu recently presented images sourced from a supposedly "secret archive " in Tehran. "Netanyahuʹs stage show was the provisional high point here (or low point, from an aesthetic point of view). But on the other hand, many Israelis mistrust Netanyahu and Lieberman. They hold them responsible for the offence of working with Trumpʹs clique to draw them into a dangerous and unnecessary war," writes Buchen

The similarities between the songs of the two countries are almost uncanny, both from an aesthetic point of view and in terms of the cultural value and social role that both societies attribute to this art form. There is currently a video on YouTube of an improvised Israeli army choir. The soldiers, for whatever reason, sing a Persian chanson that "everyone" knows.

The result is both moving and somehow out of kilter. It seems there are other things Israeli soldiers could be practicing besides attacks by fighter bombers with air-to-air refuelling that can be launched into the air from 2500 kilometres away.

In the 1860s Ferdinand Lassalle pointed out the cultural connections between the French and the Germans. He thought the similarities in the countriesʹ literature, art and other areas, would provide resistance to the idea of waging war with each other.

He also warned that there would not just be one war, because any war would necessarily provoke revenge. The rest is history – and it makes the question of why Europe is so weak today superfluous.

Omid Nouripour fled Iran for Germany with his family at the age of 13. Today, he is foreign policy spokesman for Germany’s Green Party. He argues that societal differences should ... END_OF_DOCUMENT_TOKEN_TO_BE_REPLACED

Last week Egypt's police stepped up an "unprecedented escalation" on activists by arresting a leading rights group director. Advocates on the Nile have long weathered a crackdown ... END_OF_DOCUMENT_TOKEN_TO_BE_REPLACED

What drives young men into the arms of Islamist extremists – and how can they be re-integrated into society? Five years after the deadly attacks in Paris, urgent questions remain ... END_OF_DOCUMENT_TOKEN_TO_BE_REPLACED

Relations between Ankara and Paris have reached a new low, with presidential communications contributing to the escalation. To describe recent bilateral exchanges as undiplomatic ... END_OF_DOCUMENT_TOKEN_TO_BE_REPLACED

Rather than suspecting Muslims in general, we need to co-operate more with Islamic scholars, Muslim congregations and associations, writes Muhammad Sameer Murtaza in his ... END_OF_DOCUMENT_TOKEN_TO_BE_REPLACED

After more than a month of war, there is a new ceasefire between Armenia and Azerbaijan. But whether it will last remains questionable. The conflict in Nagorno-Karabakh sees ... END_OF_DOCUMENT_TOKEN_TO_BE_REPLACED
Author:
Stefan Buchen
Date:
Mail:
Send via mail

END_OF_DOCUMENT_TOKEN_TO_BE_REPLACED
Social media
and networks
Subscribe to our
newsletter