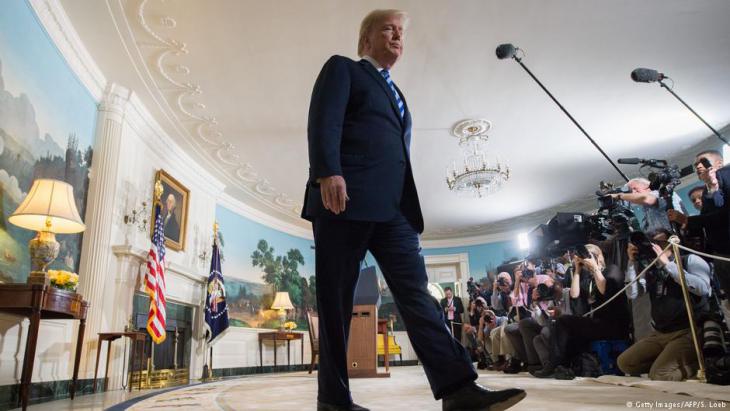 Notwithstanding the dreadful mistake of de-certification, Trump can keep the deal on life support if he does not immediately re-impose sanctions. This would give the other five powers the time needed to work collectively with Iran and reach a new agreement. Commentary by Alon Ben-Meir

Donald Trumpʹs de-certification of the Joint Comprehensive Plan of Action (JCPOA) is dangerously reckless. With European heads of state unable to stay the U.S. presidentʹs hand, the latter appears to have followed Israeli Prime Minister Netanyahuʹs cue. Yet neither Trump nor Netanyahu appear to have grasped the dire regional and international implications of unilaterally de-certifying this historic deal.

In January, Trump gave Britain, France, and Germany an unrealistic deadline – 12 May – to fix what he considered the dealʹs defects, including the sunset clauses under which some of the terms expire, Iranʹs ballistic missile programme – which was not part of the deal – and the monitoring of suspected Iranian nuclear sites. Regardless of the short period of notice, this was always going to be ʹmission impossibleʹ without the support of Russia and China.

Netanyahuʹs public stunt, displaying thousands of documents to provide further proof that Iran has been conducting a secret nuclear weapons programme, is not new. His claim that the Iran deal was based on previously undisclosed information does not justify the de-certification of the deal, especially because Iran has been fully adhering to all the provisions of the deal.

The fact that Iran was pursuing a nuclear weapons programme was the main reason behind President Obamaʹs effort to strike the deal. As EU foreign policy chief Federica Mogherini said in Brussels, "the deal was put in place exactly because there was no trust between the parties." Secretary of Defence Mattis echoed precisely the same sentiment, adding that "the verification [procedure]… is actually pretty robust as far as our intrusive ability to get in."

Re-negotiation not an option

The deal is certainly far from perfect, but withdrawing from it and starting from scratch may be impossible, especially in light of Iranʹs vehement refusal to modify the deal, as expressed by Foreign Minister Zarif: "We will neither outsource our security, nor will we re-negotiate or add onto a deal we have already implemented in good faith."

The de-certification of the deal will force Iran to choose one of two options. The first is to exploit the rift between the U.S. and the other signatories. In this case, Tehran could continue to adhere to the provisions of the deal, even though Iran will still suffer from unilateral (but not as severe) American sanctions. Under U.S. law, Trump must wait at least 180 days before imposing their most severe consequences, which includes targeting the banks of countries that fail to appreciably cut their oil purchases from Iran.

The second option for Iran is to withdraw from the deal altogether, restart its nuclear weapons programme and potentially even withdraw from the Non-Proliferation Treaty (NPT), thereby preventing the monitoring of its nuclear programme by the IAEA. This would pose a serious threat to Israel and other American allies in the region.

Were Iran to withdraw too

Firstly, most observers agree that Iran would resume its nuclear weapons programme, which could quickly lead to the proliferation of nuclear weapons in the Middle East. This would also increase regional tension and a growing sense of insecurity by other countries in the area, which is a recipe for sparking new and further intensifying current violent conflicts.

Secondly, given the intense enmity between Israel and Iran, the Israeli government might well decide to pre-emptively attack Iranʹs nuclear facilities before Tehran reaches breakout point. This would more than likely lead to an Iranian-Israeli war and pull other countries, including the U.S., into the fray, which could have dreadful consequences throughout the Middle East.

Thirdly, such development would also deepen Iranʹs resolve to further entrench itself in Syria, which is precisely what Israel wants to avoid. This too will prompt Israel, as it has done in the past, to attack Iranian military installations in Syria, which could also escalate into a regional conflagration. 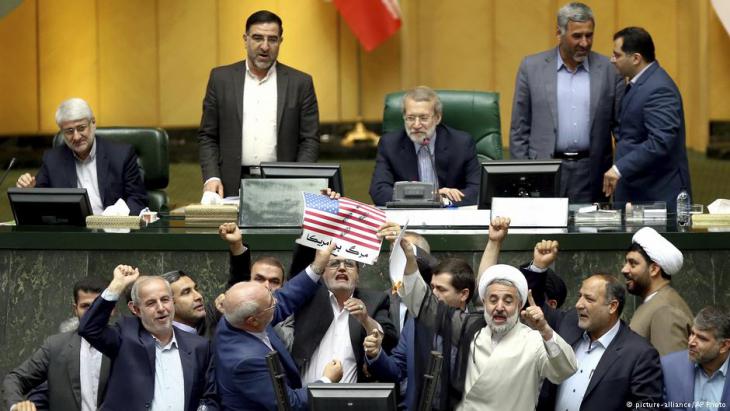 Iranian hard-line lawmakers burned a paper U.S. flag at in parliament on Wednesday after President Donald Trump's nuclear deal pullout, shouting, "Death to America!" The impromptu demonstration reflected broad public anger in Iran after Trump's decision, which threatens to destroy the 2015 nuclear accord. While Iranian officials, including the parliament speaker, say they hope Europe will work with them to preserve the deal, many are pessimistic

Fourthly, Iran will have every reason to accelerate its ballistic missile programme, which poses an even greater danger, not only to Israel but to the U.S.ʹ allies throughout the region. In addition, Iran will have further incentive to increase its financial support of extremist groups looking to destabilise the region, which it has and will continue to exploit.

Fifthly, the unilateral withdrawal from the deal by the U.S. will undoubtedly create a schism with the U.S.ʹ allies – not to mention Russia and China – and could thus foreclose any opening to modify the deal, which Trump failed to consider.

Finally, the United Statesʹ credibility will be seriously tarnished with both friends and nemeses, especially at this juncture when the U.S. is preparing to work out a deal on de-nuclearisation with North Koreaʹs Chairman Kim Jong Un, who now has a perfectly legitimate reason to doubt any American commitment to adhere to future agreements.

Had the deal been maintained

Given that there are six signatories to the deal – not counting Iran – and seven years to go before the first sunset clause expires, Trump along with the U.S.ʹ European allies could have made every effort to enlist the full co-operation of Russia and China. Both powers would have supported a revised deal, as neither wanted the U.S. to withdraw from the deal, nor Iran to acquire nuclear weapons. This would have compelled Iran to take the collective demand seriously, fearing that otherwise joint crippling sanctions will be reinstated, something Tehran wants to prevent at all costs. Collectively, they could have exerted far greater influence on Iran to modify the deal and mitigate U.S.ʹ and regional alliesʹ concerns.

New talks would not have been limited to fixing the current deal, but to offering Iran a path for normalisation of relations with the West. Iran exists and will continue to exist indefinitely. The U.S. and the rest of the international community have every right to demand that Iran end its meddlesome activities in the region. Similarly, Iran has the right to govern itself as it sees fit, without fear and intimidation.

Re-visiting the Iran deal would have provided a golden opportunity to change the regional dynamic, as long as Iran were ready and willing to play a constructive role in stabilising the region. This should have been the larger goal behind the search for a comprehensive and permanent new deal.

To that end, Tehran could have been required to commence talks about its ballistic missile programme, either as a separate deal or in conjunction with the new talks to modify the current deal. Iran would have been under pressure to temper its bellicose rhetoric, its support of violent extremist groups and cyber hacking campaigns and to end the building of a network of partners and proxies – the "axis of resistance" – which raises regional tensions and could lead to military confrontation.

Moreover, Iran would have been compelled to ease the regional tension in the countries where it is directly or indirectly involved, by taking the initiative to bring an end to the horrifying wars in Yemen and Syria, keeping Hezbollah and other extremist groups at bay in the process. Iran could have also been induced to stop threatening Israelʹs existence, thereby reducing the tension and preventing direct confrontation between the two countries, which in fact both sides want to avoid.

Notwithstanding the dreadful mistake of de-certification, Trump can keep the deal on life support if he does not immediately re-impose the sanctions and gives the other five powers the time needed to work collectively with Iran and reach a new agreement – one that will chart a new course in the Middle East and potentially mitigate the multiple conflicts in which Iran plays a pivotal role.

Otherwise, we should all brace ourselves for intensified turmoil in the Middle East, thanks to the utter recklessness of Trump and Netanyahu, who failed miserably to realise how horrifying the consequences will be.

Alon Ben-Meir is professor of international relations at NYUʹs Center for Global Affairs. He teaches courses on international negotiation and Middle Eastern studies.

Analyst Iyad El-Baghdadi examines the ongoing tensions between the United States and the two Gulf states – Saudi Arabia and the UAE – and their geopolitical implications in ... END_OF_DOCUMENT_TOKEN_TO_BE_REPLACED

From the Euphrates to the Mekong, dams that ensure one country's water supply risk leaving others parched. But shared water resources can be a source of peace as well as conflict ... END_OF_DOCUMENT_TOKEN_TO_BE_REPLACED

For over fifty years, British photographer Peter Sanders travelled across the Middle East and further afield, seeking out the saints of Islam. His work uncovers a little-known ... END_OF_DOCUMENT_TOKEN_TO_BE_REPLACED

Europe's double standard on refugees, exposed yet again by the war in Ukraine, is morally deaf and geopolitically dumb. Europe can only defend itself by persuading developing and ... END_OF_DOCUMENT_TOKEN_TO_BE_REPLACED
Author:
Alon Ben-Meir
Date:
Mail:
Send via mail

END_OF_DOCUMENT_TOKEN_TO_BE_REPLACED
Social media
and networks
Subscribe to our
newsletter