In Search of Moderate Taliban

It appears that President Obama's idea of entering into dialogue with so-called "moderate Taliban" has met with a surprisingly positive reaction. Although the idea was initially rejected categorically by those close to Mullah Omar, the Taliban would now appear to be ready to talk. Martin Gerner reports from Herat 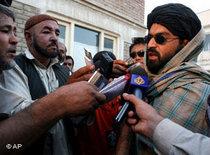 Experts now consider that the international community made a mistake in not trying to engage with Taliban moderates after the regime was toppled in late 2001, e.g. by inviting them to take part in the Petersberg conference

​​"Mullah Omar has given the green light to talks," Abdullah Anas, a Taliban mediator, explained last week to the Sunday Times. "A big, big step has happened. For the first time, there is a language of peace on both sides."

Everything seems to point to the fact that those involved in the secret strategic talks between the Taliban and the Afghan government, which have been taking place in Saudi Arabia in recent months, have reacted positively to Obama's offer. If these reports were to be confirmed, it would put the negotiations, which are supported by the British and tolerated by the US Administration, on a new footing.

"I have been meeting with Taliban for the last five days and I can tell you Obama's words have created enormous optimism," said Qayum Karzai, brother of the incumbent Afghan president. "There is no other way left but talks."

Nevertheless, the Afghan people remain sceptical. "Afghanistan's politicians should know that people do not want the Taliban back in power," says Massood, a well-known television show host. "If Obama says 'yes' to negotiations, this can mean two things: firstly, it is an admission that the US needs the Taliban to achieve a better result, and secondly, it is a shameful setback for all democratic efforts."

Refugees in a camp near Kabul: these refugees fled Helmand in an attempt to escape both the Taliban and NATO air strikes (photo: Martin Gerner)

​​Abdullah, a young Tajik politician who has followed all negotiations between the government and the Taliban with mistrust, now says: "We have to talk to these people. It is clear that large parts of the Pashtun population, especially in the South, sympathise with the Taliban. If they accept that it is not about toppling the entire state and forcing people to do things, then there is no alternative to sharing power with them."

In view of the US admission that it cannot win the war in Afghanistan, it would seem as if there is no alternative to Obama's idea. That being said, there are contradictions. US diplomats criticised the most recent agreement between the Pakistani Taliban and the government in Islamabad in the troubled district of Swat. In the opinion of Ahmed Rashid, author of the bestseller Taliban, this makes it possible for the Taliban to prepare itself calmly for the conflict in Afghanistan.

Nevertheless, the circle of people closest to Mullah Omar is only one branch of the movement. 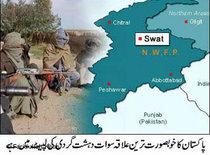 Once a popular tourist destination, now controlled by militant Taliban fighters: the Swat valley is considered a stronghold of the radical Sunni militia

​​The fact is that the Taliban is extremely heterogeneous. If Obama could succeed in including local, non-ideologized leaders of the insurgency in the process of political reconstruction, there would be hope of gradually isolating the leadership of the radical Taliban.

Moreover, the 17,000 additional US soldiers Obama is sending to the region would seem to contradict his interest in negotiations. Experts feel that the US administration would like to conduct any possible negotiations from a position of strength, which could result in radical Taliban groups also arming themselves for tough wartime clashes.

Taliban in the parliament

In the meantime, observers are calling for minimum preconditions to be defined for the negotiations: for example, the Taliban should be required to distance itself from terrorist attacks and accept the Afghan constitution and equal rights for women. In return, an amnesty could be granted to some of the insurgents. A corresponding state programme has already been in existence for several years. Moreover, just under a dozen former members of the Taliban are members of the Afghan parliament.

Meanwhile, the world waits for the new US strategy on Afghanistan. The anti-terror campaign run by the US military over the past seven years has often been undifferentiated and, in terms of strategy, not very well thought out. According to both diplomats and aid workers, this makes it hard for the insurgents to lay down their weapons.

For quite some time now, the remaining member states of NATO have been involved in the new, aggressive strategy, which has taken the lives of an increasing number of civilians. Civilian aid workers are feeling the effects of this state of affairs in that it is increasingly impossible for them to work in areas where the international military is operative, even for short spaces of time.

Breeding ground of corruption and unemployment

The fact that the Taliban continues to gain influence is primarily down to the inability of the Karzai government and Afghanistan's donor countries to bring a noticeable improvement to the lives of the rural population. A considerable increase in employment would also mean an increase in security. As it is, however, corruption and unemployment are a fertile breeding ground for the insurgency movement.

Another cause of the current calamity is the Petersberg Agreement. The Taliban were excluded from the negotiating table at the conference  a move the major players at the conference now consider to have been a mistake.

A New Strategy for Afghanistan
Lessons Learned from Iraq?
Obama's new US strategy on Afghanistan is forcing the European states to make decisions. If they want to increase their influence, they will have to fulfil the tasks they are already doing much more effectively. By Guido Steinberg

German Troops in Afghanistan
Half-hearted on the Hindu Kush
Germany's Minister for Defence has announced the deployment of a rapid reaction force in Afghanistan. According to Peter Münch, however, in the medium term, the German government will also no longer be able to refuse deployment to the south either

NATO in Afghanistan
The Alliance and the Limits of its Strategy
The war in Afghanistan raises major challenges for the North Atlantic Alliance. The outcome of NATO and coalition troops' involvement in the battle against the Taliban and al-Qaida is questionable. An analysis by Timo Noetzel and Sibylle Scheipers

END_OF_DOCUMENT_TOKEN_TO_BE_REPLACED
Social media
and networks
Subscribe to our
newsletter