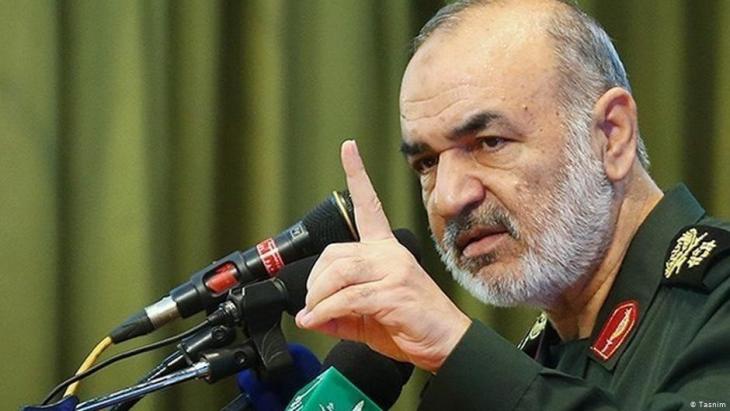 Once mocked as the "commander of the gossips" because he spread crazy ideas about the West in TV talk shows, Hossein Salami is now the new head of Iran's Revolutionary Guard Corps. The appointment of this – at least verbally – radical man took place shortly after Trump declared the corps a terrorist organisation. By Ali Sadrzadeh

"We assume that in the political geography of the world, a reality called America does not exist. That is our hypothesis and we live with this hypothesis. You may die for all I care on account of such ignorance and animosity." Although this sentence is devoid of political reason and two years old, it has to be taken seriously today. Very seriously, in fact, if you want to understand where the world is heading. For the man who once said this sentence was named head of the Revolutionary Guards two months ago by Ali Khamenei.

It was 21 September 2017 when this insane sentence fell as an official response to Donald Trump. Two days earlier, before the United Nations General Assembly, the U.S. President had described the leadership of the Islamic Republic as a lawless gang that his predecessor Obama should never have trusted.

Following Trump's speech, an odd silence – by Iranian standards – prevailed in the official Iranian media for two days. The attack was unusually harsh and unexpected. During the U.S. presidential election campaign, Tehran's rulers had made it clear several times that they preferred Trump to his rival Hillary Clinton as president. And then this hate tirade. After two days of numbed shock, the hour struck for Hossein Salami, then vice-commander of the Iranian Revolutionary Guards.

An appellation full of symbolism

And Salami didn't disappoint. He had always been known for pompous speeches and exaggerated sayings. That's why neither he nor his sentence about America's non-existence was taken particularly seriously. On the Internet there is a long list of ludicrous statements by Salami – not only about Israel, the USA and Europe, but also about the "counter-revolutionaries" in his own country. The collection is intended to expose him as a master of empty slogans. Salami has also been called the "commander of the gossips".

But the days of such mockery are now over. Salami has ascended to the highest level of power. Since 21 April 2019 he has been Supreme Commander of the Iranian Revolutionary Guard Corps. The term of office of his predecessor General Jafari was not yet over when Revolutionary Leader Ali Khamenei appointed Salami. 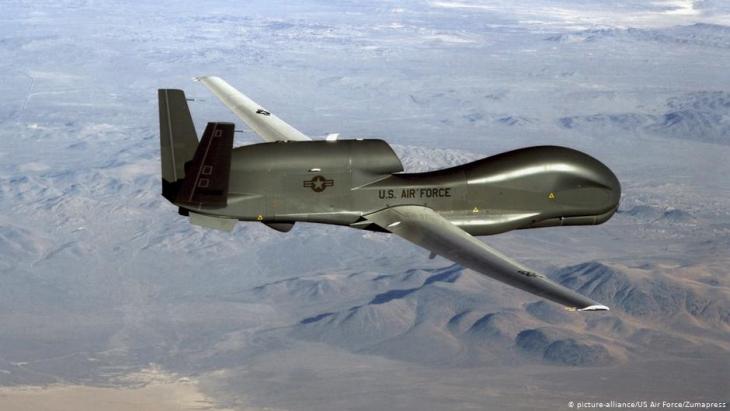 On confrontation course: "The shooting down of the American drone was a clear message to the United States," said the Supreme Commander of the Revolutionary Guards, Hossein Salami, according to state television. The country's borders are red lines for Iran, and it will react sharply to any aggression. "Iran is not seeking war with any country, but we are fully prepared to defend ourselves"

Everyone wondered what Khamenei was up to when he appointed such a man to be commander of the country's most powerful and important institution at such a time – a time that obviously knows only one direction: escalation and war. Two weeks earlier, Donald Trump had declared the Revolutionary Guards a terrorist organisation and announced new and tougher sanctions against Iran. Now in Iran, the loudest and – at least verbally – most radical guardsman has become the head of the corps, which is effectively a state within a state. What's more, the Revolutionary Guards are the real state.

"The beginning of American defeat"

In Iran, everyone understood Salami's appointment as being precisely what Khamenei intended to indicate: a striking sign of impending escalation. " Your appointment marks the beginning of American defeat," wrote General Mohammad Bagheri, Chief of the General Staff of the Iranian Army, in his congratulatory letter to Salami. Only two months have passed since that letter. An American defeat is not yet in sight, but a war with the USA seems to have become possible. This has not only been caused by Trump's policy, but also by the intransigence of Ali Khamenei, Iran's most powerful man and supreme commander of all armed forces.

Millions in Idlib depend on aid coming through a northern border crossing. On 10 July, the UN Security Council votes whether to keep it open. The decision may hinge not only on ... END_OF_DOCUMENT_TOKEN_TO_BE_REPLACED

Mourad al-Marouai was just nine when a landmine killed him on a beach in war-torn Yemen, a tragedy that will haunt his family forever. After a swim, the little boy "suddenly ... END_OF_DOCUMENT_TOKEN_TO_BE_REPLACED

This year’s Morgenland Festival opened with the premiere of Kinan Azmeh’s musical theatre piece, “Songs for Days to Come”, based on fifteen poems by contemporary Syrian poets. ... END_OF_DOCUMENT_TOKEN_TO_BE_REPLACED

Rumi's poems, though generally stripped of their Islamic symbolism, are hugely popular around the world. Yet Islamic mysticism is still very much at the heart of these verses. ... END_OF_DOCUMENT_TOKEN_TO_BE_REPLACED

The Ukraine war is changing the global geopolitical landscape. Ali Khamenei, Iran's most powerful man, is already cosying up to Russia in anticipation of a harsh post-war reality ... END_OF_DOCUMENT_TOKEN_TO_BE_REPLACED

Analyst Iyad El-Baghdadi examines the ongoing tensions between the United States and the two Gulf states – Saudi Arabia and the UAE – and their geopolitical implications in ... END_OF_DOCUMENT_TOKEN_TO_BE_REPLACED
Author:
Ali Sadrzadeh
Date:
Mail:
Send via mail

END_OF_DOCUMENT_TOKEN_TO_BE_REPLACED
Social media
and networks
Subscribe to our
newsletter